What a Con*Cept! Nina Launches Outer Diverse in Montreal

﻿﻿
Last weekend I met old friends Toulouse and Vanessa in Montreal to attend Con*Cept 2011 at the Espresso Hotel and to launch my new book Outer Diverse, the first book of The Splintered Universe Trilogy  on October 15th, the same day as its world release by Starfire World Syndicate.

I met Vanessa and Toulouse in the hotel lobby. Toulouse—cool cat that he is—pointed out the espresso machine behind the front desk and winked. I ordered a double shot of the strong brew and watched Toulouse down his single shot (a lot for a small stuffed cat) in three major inhales. If he was a SIM he would have shivered with elation and uttered the SIM word for “Arriva!” What an auspicious start to Montreal’s annual science-fiction and fantasy convention!

﻿
The 3-day con was smallish in numbers but made up for it with a huge heart, lots of character (or is that characters?), and a good selection of panels and workshops, including a workshop on World Building by yours truly.

I shared an interesting panel on Politics in SF (From Avatar to Zardoz) with comedic author Ira Nayman, writer and critic Kathryn Cramer, and Mark Shainblum, SF/F and comic book writer. I didn’t see Toulouse in the audience; I think he lured Vanessa downstairs to the lobby for more espresso—the lush! I followed with a panel called “Characters or Real People” with the effervescent Violette Malan, author of The Shadowlands, and Nanowrimo wiz Rebecca Blain. We were the real characters. Both Vanessa and Toulouse managed to show up for the launch of my space adventure-thriller Outer Diverse, espresso cups in hand. Well, we were in the Espresso Hotel...
﻿
Vanessa is a master jeweler; she created and launched a jewelry line specifically for Rhea Hawke, the bold space detective of the series. It was astonishing! The dealer’s room was abuzz with interest for the clean bold lines of the Rhea Hawke Collection. You can find it featured in her online shop on Etsy.
﻿
My World Building workshop was well-attended by a diverse crowd that ranged from a young teenage girl writing a dystopian science fiction novel to a retired physicist writing an urban fantasy. I got out my tablet and magic pen and embarked on my interactive power point presentation. Everyone seemed to understand my ninonian scrawl and asked great questions. We covered a wide range of topics from first contact and achieving realism to integrating world with theme and premise.

Eric Flint, author of the 1632 Alternate History Series, was the Guest of Honor. Eric comes by his alternate history works naturally: he graduated Phi Beta Kappa form the University of California in LA, majoring in history. Despite his academic credentials, Eric took on a varied working life including longshoreman, truck driver, steel worker, meatpacker, glassblower and machinist. I'm sure all those positions provided fertile ground for storytelling.

Interested in buying one of my books, Eric asked me which was my favorite. His question took me unawares and I had to think. Books are like children. At one time or another each is your favorite. Realizing that he was looking for some guidance, I pointed out my environmental thriller Darwin’s Paradox. He ended up buying its prequel, Angel of Chaos. Funny that…

The con offered the regular meal of obligatory Doctor Who Panel, Klingons and Star Trek crew on shore leave, masquerade and dance, film and filking and—of course—never-ending room parties. Because this was Montreal—and Vanessa’s first time there—we dove into the city each night for a taste of Montreal culture and fine dining. Toulouse directed us first to an Italian restaurant on Cresent Street. The ambience was in perfect keeping with the con: the spatious restaurant offered a steampunkish-retro-industrial environs. We enjoyed an authentic Italian meal under high ceilings, surrounded by brick walls and one entire wall dedicated—like a tall bookshelf—to storing wine. Another night we strolled into Old Montreal and found several cafés to dine and drink (see Toulouse’s post).
﻿


As with all good cons, Con*Cept provided a venue to meet old friends and make new ones. The only thing missing was a decent bar (but then again there were those room parties and all of Montreal!) I visited with the vivacious and award-winning author and wizard storyteller Marie Bilodeau.

Marie was there with her newest space fantasy adventure Destiny’s Blood, short-listed for the Aurora. Go, Marie! I also visited with Claire Eamers, who just published her story in Tesseracts Fifteen.
﻿


Some new faces for me included the con-hopping Karen Dales, award-winning author of the paranormal series The Chosen Chronicles (see you at AdAstra, Karen!) I had the fortune of sharing a panel with the witty and elegant Violette Malan, author of The Mirror Prince—she’s such a snappy dresser! Then there was Ira Nayman (the witty superhero with vim, vigor and a few other things that I’m still trying to figure out…). And Mark Shainblum, the debonair and charming SF&F writer and comic book writer, who gave Toulouse some good advice about wearing black. I also met Alan Draven, fresh from comic con with his newest book, Fractured Time.

The dealer’s room was a cornucopia of fine jewelry, steampunk accessories, books, games and strange looking people. I felt at home. 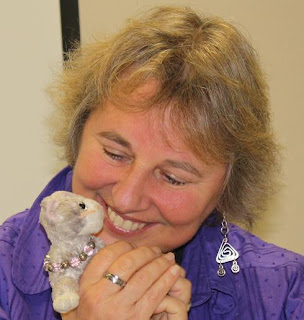 Merci to Cathy Palmer-Lister, Marc Nadeau, Howard Picaizen, Rene Walling and all the other convention volunteers who made Con*Cept a friendly, warm and fun event.


p.s. Just looking at the pictures ... for a cat who spent a lot of time down in the lobby drinking free espressos, Toulouse sure got around! Way to go, Toulouse!

OUTER DIVERSE is currently available at Amazon (Canada, UK and USA), Borders, Barnes & Noble, Chapters and other quality bookstores near you.