UofT is a place of learning—erudite, splendid, yet humble—beautifully epitomizing “new embracing old”. When new embraces old, we get magic. Wizard-magic. Harry Potter kind of magic. The kind of magic that only someone who is open, faithful, and confident can wield. This is ancient magic. The magic that lurks like Reznikoff’s ghost in the ancient halls of University College, or the magic currently wielded at 1 Spadina. A magic borne of wisdom, lore, and story.

The St. George campus of UofT lies embedded in the city of Toronto, steps away from the upscale shopping district of Yonge and Bloor and not much farther from the bustle of the financial district on King and Bay. It’s a bracing walk to Union Station, where every moving vehicle ends up at some time. UofT sprawls like an amoeba of neutrinos through the parliament buildings of University Avenue, making subtle changes here and there. Recreating the fabric of the cityscape in muonic subtleties.

In Part 1 of my Old / New journey, I wrote about my walk south from the St. George TTC station along St. George to the Galbraith and Bahen buildings, where I teach in science and engineering. I currently also teach in the Bloomberg Health Sciences building on College Street. It lies directly across from a building that has long held my curiosity: the Terrence Donnelly Centre for Cellular & Biomolecular Research (CCBR).

Donnelly is where some of the coolest research and discoveries in biomolecular and cellular research are being made. Benjamin Blencowe and his team’s recent uncovering a protein’s sweeping influence on autism last December using introverted mice, for instance. Named after the philanthropist Terrence J. Donnelly, the centre was the vision of UofT Professors Cecil Yip and James Friesen. In the 1990s they foresaw that new genomic technologies would open up progress in biomedical research in a time when there was no human genome sequence or stem cell technologies and DNA sequencing was slow and inexpensive. Yip and Friesen envisioned a collaborative interdisciplinary research facility that, when it opened in 2005, brought together over 500 specialists—biologists, computer scientists, physicians, pharmacists and engineers—to advance the university's groundbreaking research in molecular biology.

Designed by ArchitectsAlliance and Behnisch Architekten, Donnelly is a sustainable, transparent 12-storey building that promotes collaborative research within flexible, loft-style open concept laboratories and social spaces: ideal for interaction and sharing of ideas. "The Terence Donnelly Centre for Cellular and Biomolecular Research ... is intelligent, unconventional architecture designed through a strong collaboration between local Toronto architects and German gurus of high-technology design," writes Lisa Rochon of the Globe and Mail (2005). "Three faculties—medicine, pharmacy and engineering and applied sciences—agreed to participate, so that biologists might start brainstorming in the same labs along with computer scientists and chemists," Rochon adds.

The centre is located on what was previously Taddle Creek Road. The CCBR building—which from College Street resembles two colourful stacked cubes—is set back by a gradually sloping plaza with granite benches and groves of white paper birch. The building and plaza are flanked by several historic buildings (80-year old Fitzgerald Medical Building to the east; the 1919 Rosebrugh Institute of Biomaterials and 100-year old Lassonde Mining building to the west; and the Medical Sciences Building to the north).

Upon entering the complex, the granite plaza gives way to white terrazzo flooring in an expansive multi-storey atrium. The top lit glass-ceilinged atrium connects the adjacent heritage Rosebrugh building to the CCBR in a counterpoint of techno-minimalism with Romanesque tradition. While clearly expressing its 21st century vision, Donnelly honours the earlier work of Frederick Banting and Charles Best—scientists who discovered insulin in 1921—by sharing its western wall with the brick exterior of the Rosebrugh building, where research into diabetes continues.

My eyes feasted on this rich expression of old and new, starting with the articulated buff coloured brickwork—the row-lock brick patterning and tall Roman corbelled arch windows—of the western wall. My gaze swung to the textured green of the giant bamboo garden in front of it; and finally to the sweeping staircase ahead of me. As I walked up the shallow wide steps lined by pillars that reached skyward, I felt drawn to the bamboo forest to my left. Created by landscape architect Diana Gerrard, the garden offers several "picnic" sites of wooden platforms and benches, which I learned had come from the ash, tulip and cherry trees that had occupied the original lane way.

Rochon suggests that "three elements enliven the architecture: landscape, history and natural light. There is an insertion of greenery, not only at the atrium level, but also on three research floors where plantings of black olive trees and a creeping fig create a sense of moderate climates without resorting to palm trees." Standing on the fifth floor of a research corridor that also overlooks five stories down in the atrium, I enjoyed a splendid view of how new embraced old through these elements.

On my way to the elevator on the second level, I passed several seminar and lecture halls. Colour-coded, like much of the building, there is the "Red Room", the "White Room" or the "Black Room", projecting outward into the wide corridor like giant pods with surfaces polished in mosaic tiles from Italy.

I took the elevator to the twelfth floor to explore several of the research floors, finding several multi-storied enclaves of trees, wooden floors and benches or desks that invited. These staff lounges, along with a system of open corridors and stairwells encourage informal, interdisciplinary contact on which scientific discoveries are built. I wound my way down on a series of stairs that spiraled like a DNA helix and a dizzying zigzag of stairs that hung over the bamboo-forested atrium. Gazing up from a hanging stairway off the fourth floor, I rested my eyes on a researcher sitting at a desk on the fifth floor: she perched over the atrium like a bird on a tree limb. I was reminded of the Salk Institute in La Jolla, California, where interaction is promoted between scientists and researchers of the various disciplines through ingenious design.

"That it is a 12-storey, shifting box of transparency is an act of intelligent decisions and of unconventional thinking around what a curtain wall should look like," writes Rochon of Donnelly. Rochon describes the south-facing facade as a double skin of glass, which permits solar and acoustic control and provides a rich transparency on the building's primary face. From within the research offices, it's possible to open and close the inner skin of windows. The exterior glass wall acts "like a big sweater" lined with metal louvres. Each office has electronic controls to operate the thermostat, the light switch and the louvres." The east, west and north facades are glazed with patterned ceramic fritted glass and coloured laminated glass, providing shade and some privacy. The north façade is a curtain wall, providing light into the building; the east has a pattern of laminated coloured glass representing genetic code; the west façade has dotted fritting applied to its glazed panels and is highly transparent to show the colours of Donnelly’s 11 research departments painted on the hallway walls. Gardens are watered via roof runoff, collected by an integrated stormwater system.

Donnelly “is not so much an object as a system that coerces a variety of disciplines to interact,” writes Jiing-yen of the University of Waterloo. 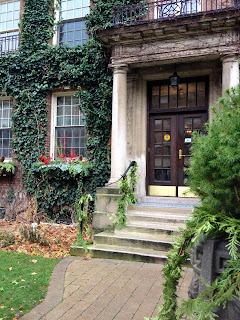 UofT Faculty Club: Every journey requires repast—a place to relax, eat and drink—and my feet naturally directed me to one of my new favourite haunts: the UofT Faculty Club. Located close to the hub of the campus, on Willcocks Street just east of Spadina, the club is open to members who include faculty, staff, graduate alumni and their guests. I entered the 1896 heritage building, built in a Georgian Revival-style, and passed the elegant first floor lounge to the pub below. The pub welcomed me with excellent food, drink and a relaxing ambience. Bathed in rich tones of wood and comfortable chairs and warmed by a cozy fireplace, it reminded me of a Dorset pub I’d visited years ago; full of colourful characters and a well-stocked bar. I felt both at home and like a traveler. Like I’d walked into history with modern comfort. I ordered the beet salad from my friendly waitress; it provided a refreshing and attractive light meal for a mid-day traveller.

What better place to end my journey of “new embracing old” than in a place where “old embraces new.”

Posted by Nina Munteanu at 5:31 PM No comments: