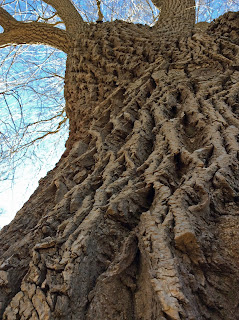 It was that time of stillness in early spring when the snow has fled but the intractable greys and browns of winter persist. I set out into the veil of hibernation, in search of a restive spring.  I walked along Wilket Creek park in Toronto and amid the winter duff a great gnarly white willow tree beckoned

What I saw excited and intrigued. I saw moss, lichen, and fungi nestled in deep crevasses of rope-like bark. The ridges were so deep that when I captured one with my camera, the next one looked like another tree in the background. Seen up close, the bark texture resembled bone and stone. In one huge crevice a spider had made its web and had ensnared some unfortunate insect for its dinner. In another cavern-like fissure, I saw the brilliant yellow-green of a new lichen. Here, amid the “dead” bark, an entire community was stirring with the freshness of spring. The different bark textures of trees attract different species that live on it. The deep fissures and crevices on the bark of white willow provide a wonderful haven for various epiphytes such as moss and lichen, and many species of insects and spiders. The invertebrates, in turn, attract birds that feed on them. 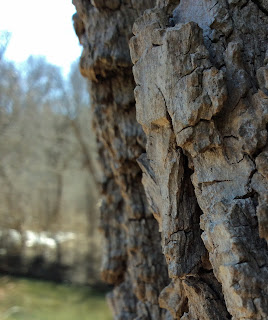 The bark of a willow plays a similar role as our skin for us. It protects the tree, particularly its soft living and growing layer. Tree bark is also home to many species, providing an important micro-ecosystem in the forest.

Willow bark protects the living and growing layer called cambium. Every growing season, the living cambium adds a new layer of cells to the xylem, which it surrounds. The outer edge of the cambium produces another layer of cells that make phloem, which transports sugars from the leaves to the rest of the tree. Outside that, most trees have a layer known as the cork cambium, which produces the cork – the tough outer layer of the tree. This outer layer is all that we usually see of the bark. 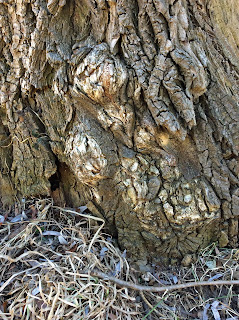 The bark of many trees make chemicals that protect against fungal and insect attack. Birch (Betula) bark is high in volatile oils—which make it great for lighting fires—and is so waterproof and resistant to decay that tubes of birch bark can still be found on the forest floor after the wood inside has decayed. Bark of most oak trees (Querqus) is high in tannins, which are toxic and protect the tree from insects.

The willow has salicylic acid in its bark, branches and leaves that helps mediate the tree’s resistance against various pathogens. It does this by inducing the production of pathogenesis-related proteins through a rapid signaling process. The acid helps mediate systematic acquired resistance in which a pathogenic attack on one part of the plant induces resistance in other parts. The signal moves to nearby plants when the salicylic acid converts to the volatile ester methyl salicylate. Willow communicates... 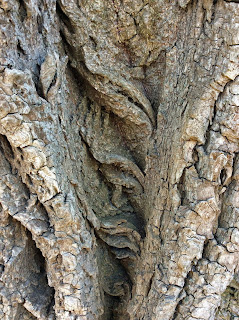 Willows enact an important ecological function by colonizing areas that have been disturbed and undergoing successional recovery. Because they grow quickly and easily propagate using stem cuttings, willows can also be used to vegetate stream banks to help prevent erosion and sometimes to re-vegetate other types of disturbed lands. Willows are also common food—especially in winter—for mammals such as deer, moose, and rabbits, among others. Willows are also an important source of nectar for bees in early spring when few other species of pollinators are flowering.

Willows are also a good source of renewable energy, which may prove important in the future. The willow biomass can be burned directly, or it can be chemically converted into more easily portable liquid fuels such as alcohol or a synthetic, petroleum-like mixture. Willow twigs are flexible and have been used to weave baskets, for caning, and to make woven fences and other lattices.
Willow as Healer 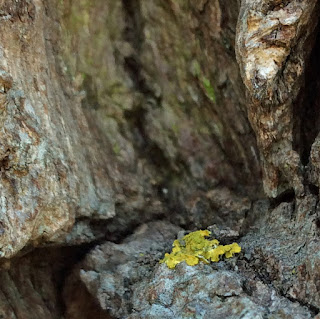 Willows have a long history of medicinal use. Many cultures are known to have chewed willow twigs to relieve pain and fever. The original source from which salicylic acid was extracted was the bark of the white willow (S. alba), a native of Europe. This chemical is used to manufacture acetylsalicylic acid (ASA), an analgesic useful for treating pain, fever, and inflammation.
Willow as Magic
The magic and legends associated with the willow tree are often bound up with water—its preferred habitat—and the moon. Hecate, the Greek goddess was the moon and of willow, taught sorcery and witchcraft. The priestesses of Helice, also associated with water, used willow in their magic and witchcraft. The Greek poet Orpheus carried willow branches on his adventures in the Underworld. With its ability to regrow from pollarded trees and cuttings, the willow symbolizes renewal, growth, vitality and immortality to the Chinese. 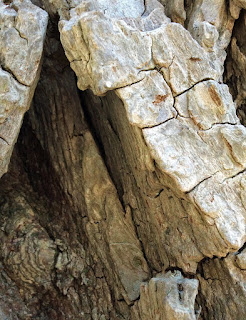 Klein, R.M.1987. “The Green World. An Introduction to Plants and People.” Harper and Row, New York.

Street, L. & S. 2002. “The importance of Aspens for lichen.” In: Cosgrove, P & Amphlett, A. (eds.). The Biodiversity and Management of Aspen Woodlands: Proceedings of a one-day conference held in Kingussie, Scotland, on 25th May 2001. The Cairngorms Local Biodiversity Action Plan: Grantown-on Spey.


Nina Munteanu is an ecologist and internationally published author of award-nominated speculative novels, short stories and non-fiction. She is co-editor of Europa SF and currently teaches writing courses at George Brown College and the University of Toronto. Visit www.ninamunteanu.ca for the latest on her books. Nina’s recent book is the bilingual “La natura dell’acqua / The Way of Water” (Mincione Edizioni, Rome). Her latest “Water Is…” is currently an Amazon Bestseller and NY Times ‘year in reading’ choice of Margaret Atwood. Nina's latest novel "A Diary in the Age of Water" will be released by Inanna Publications in 2020.

Posted by Nina Munteanu at 3:47 PM No comments: