Three Mistakes Not to Make When Crossing the Border 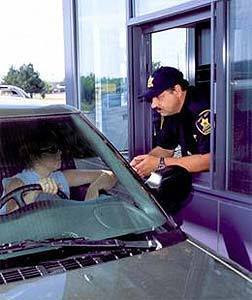 I wasn’t long back from my month-long sojourn out of province and country when I had to cross the border yet again into the United States on a mailing errand. I thought nothing of it, as I grabbed my passport and the package I was taking across the border to send to a bookstore in the United States because I was strapped for time and I knew it would take a bazillion days to get across the border via the traditional carriers. Well, I should have known better. My Karmic relationship with borders verges on dangerous at best. That day, I foolishly wore my new tie-dye t-shirt, donned my pilot sunglasses and had the New Age music blaring loud as I neared the border crossing. What was I thinking? I went on to make three fatal errors, which I pass onto you for your vicarious learning experience—at my expense, of course… LOL! Go ahead and laugh… I did… after…

Mistake #1—Attire and sense of humor: Was it the tie-dye shirt, my shades (which I stupidly didn’t take off right away) or my goofy smile…the customs officer started joking with me. That should have been the first alarm: customs officers don’t have a sense of humor, do they? So, when I told him I was just hopping over to mail a parcel of books to the States because it was cheaper and faster from there, he decided to get curious and wanted me to open the parcel I’d so meticulously put together and sealed. “To make sure it isn’t a bomb or has LSD or cocaine in it,” he teased—or so I surmised from his smirk and laughed. More mistake. I must have looked like some hippy-dippy mama drug dealer…

Mistake #2—Honesty and naïve attitude: I openly showed my disappointment at ruining the parcel I’d taped up so nicely. As I struggled to find something that would open the parcel without ruining the wrapping, I foolishly asked him if he could tape it shut again. He got downright surly and said he didn’t have to do that or anything. He then informed me tersely that I was using very suspicious language. Instantly realizing my error, I decided to adopt a guarded serious 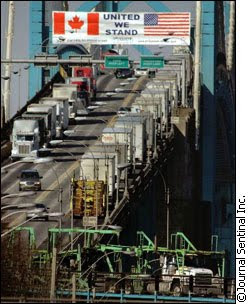 tone. As if to counter it, he produced what he called “a dangerous weapon”, which turned out to be a very tiny Swiss army knife to help me open the parcel with less damage. I felt like I’d entered the Twilight Zone as I used the inch-long blade to slice open the tape and showed him the books. After a cursory perusal, he decided that he was suddenly interested in the trunk. I was in for the whole meal deal, I guess…

So, I showed him the messy trunk, including a box full of books, which for some reason he wasn’t interested in. Holding onto my passport, he then told me to pull over and go inside. I felt a little helpless and conjured an old memory of the Cairo Airport when all our passports had been confiscated for over an hour under the guard of strange surly men with Uzis.

Mistake #3—Entertaining and cocky spirit… oh, and BIG mouth: The three large men in flack jackets looked up as I sauntered inside and surrendered my opened package of books to one of them. He pulled out a book and frowned at it then asked me what all that “Alien” stuff was about. I laughed and told him that I was “The Alien Next Door”. What WAS I thinking? (You’re doing the Facepalm thing, right?) That’s when they all got interested in me. Never be “interesting” when you’re alone in a room with four bored customs officials. One of the other men glanced knowingly at my tie-dye shirt, and casually "informed me" that he’d read that the province of British Columbia had the highest per capita sightings of UFOs. Then there ensued a four-way conversation about Canadians and UFO sightings—at my expense, of course. All kinds of theories were argued back and forth, which included Vancouver’s position as a drug-port, British Columbia’s slightly leftist politics and its history of being a haven for American draft dodgers. I tried very hard not to glance down at my tie-dye shirt and knew my windblown hair wasn’t doing me a favor right then.

Then, as if suddenly some light of justice had switched on, the officer put my books back carefully into the parcel, taped it all up with neon green U.S. Customs tape and cheerfully sent me on my way. And, yes, I got my passport back too. I wandered off in a daze as if I’d just left the set of a surreal movie.

The day after, a friend of mine passed me a CBC News article stating that Canadian border guards were pulling out their guns, batons and pepper spray more frequently. The article was based on a June report by the Canada Border Services and obtained by the Canadian Press under access to information legislation. The article reported that guards were pulling side arms from their holsters about three times a month. Pepper spray was used on aggressive travelers four times, but with no serious injuries. According to the report, the Canadian government made its decision to arm the guards for security reasons and to reflect their U.S. counterparts to help deal with cross-border criminal activity.

Posted by Nina Munteanu at 7:16 PM

Back in High School we were warned that Customs Officers have the power to detain and disassemble your vehicle. And like your mere package, it is your responsibility to put back together again.

I only leave Canada about once a year, but I always take note of the reccommendation - Don't wrap gifts just in case your baggage needs to be checked.

"Mere package"????? It was a veritable work of art! Ruined with a pinky knife! And wrapped hastily with green luminescent tape (by the customs officer... I was devastated! ... Ok... (I shouldn've taken drama in school... LOL!)

Yes, I have learned my lesson about packaging up my stuff... bring more tape! (easy) And leave my sense of humor at home! (harder to do...)

You certainly made a few errors there! At least you didn't jokingly say there's a bomb inside!

LOL! That would be the fourth mistake... HAHA!... 3 is my lucky number

Great post and very useful tips on the legal work that you should do the better task and its amazing to read out because few points we neglect during travel and show the carelessness!I must say that you done a superb job!

Thanks for sharing cheers mate!

It's nice to know that I done good... hehe

Good tips and these tips give knowledge about how to maintain a task. How to work with proper way and legally.

This is your country on the War on Drugs. America's misguided zeal to impose a drug-free society (and that's a joke right there thanks to Big Pharma) has resulted in this kind of aggressive and confrontational treatment of the common people. We also have an out- and-out war in Mexico that the media refuses to cover. Not to mention the Berlin-style wall that America thinks is so necessary on her southern border.
Why do Americans not demand this insanity STOP and STOP NOW!?!