The Christmas Truce of WWI—A Moment of Great Disobedience 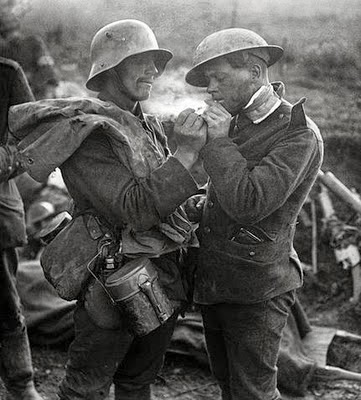 On Christmas Eve of 1914—a hundred years ago this month and in the midst of brutal trench warfare—a moment of peace broke out on the Western Front. It was a great moment of disobedience.
Cold, weary and homesick Christian soldiers on both sides of the infamous No Man’s Land of the Western Front, recognized their common humanity, dropped their guns and fraternized with their “enemy”. They had all hoped desperately that this miserable trench war would end soon but now knew they would not be home for Christmas like they had naively believed (and had been led to believe by the press). It was a moment of sudden clarity and tender mercy by those who also knew that they would likely never go home.
It was five months after the Great War had broken out; a war fated to last another four brutal years, in which fifteen million civilian and military men and women would be killed. Considered one of the deadliest conflicts in history, WWI had significant global effects, effects that still ripple through it to this day. Consequences include the Bolshevik Revolution, the Great Depression, World War II, the Holocaust, development of the atom bomb, the Cold War and the collapse of European colonialism.
As many as 100,000 of the million troops (10%), stationed along the 500 mile Western Front in World War I, mutually and spontaneously stopped fighting for at least 24 to 36 hours (from Christmas Eve to Boxing Day). Isolated instances of local truces occurred as early as December 11, and continued sporadically until New Year’s Day and into early January 1915. 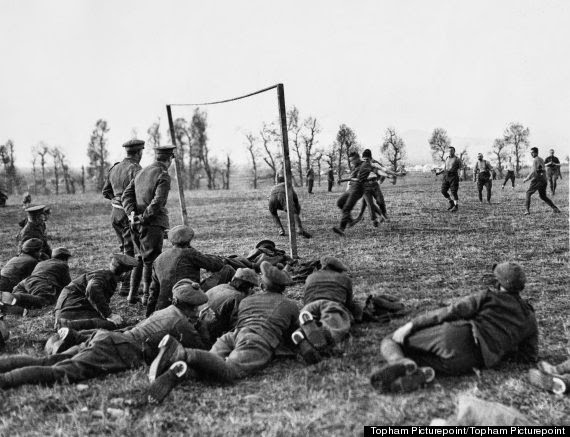 As Christmas neared, the soldiers on both sides of the trenches “sensed the stupidity of killing someone that was just like them and who had never done them any harm,” writes Gary G. Kohls of Global Research. “Many of the men that experienced the moment knew that something deeply profound had happened: a spiritual experience of mutual respect and love that epitomized their mutual Christian upbringing – and they refused to fight and kill when the war was ordered to re-start.” They disobeyed their orders that forbade them to lay down their weapons and fraternize with the enemy: an enemy—the soldier in the trench across from them—who in some ways more shared their lot than their own officers and politicians.
On Christmas Eve 1914, German troops ceased fire in the region of Ypres, Belgium and Saint-Yvon. They decorated the area around their trenches, just 30 to 300 yards from the British, French, or Belgian trenches. The Germans decorated Christmas trees and sang Christmas carols. The British responded with carols of their own. The two sides then shouted Christmas greetings to each other. Eventually, soldiers ventured out of their trenches into No Man's Land; they shook hands with their “enemy”, shared smokes, food and wine and sang with each other. Souvenirs such as buttons and hats were exchanged. The artillery in the region fell silent. Joint services were held. In many places along the front, the truce lasted through Christmas night, continuing until New Year’s Day. 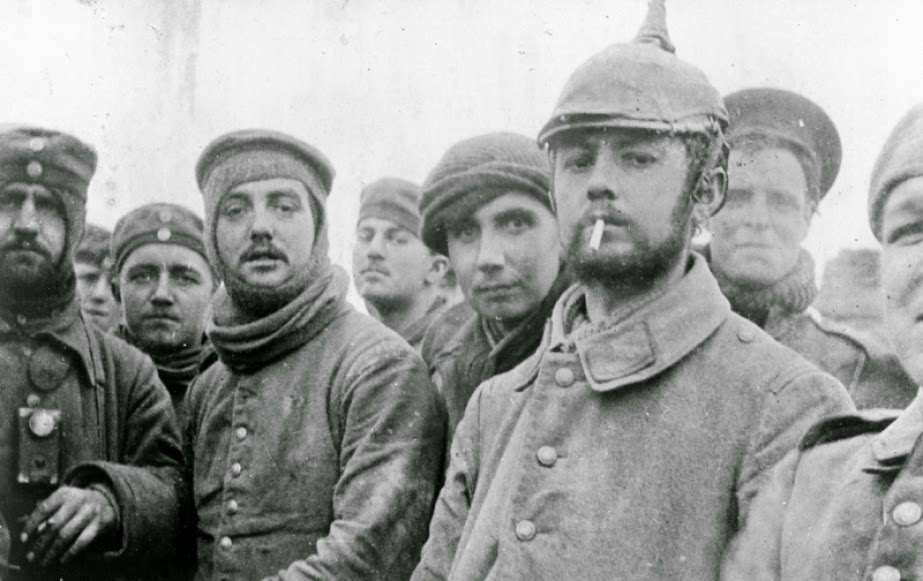 Troops from all sides took advantage to bury their dead, lying all over the battlefields; there were even reports of joint burial services and of soccer games played between the Germans and British.
Despite general’s strict orders against any kind of fraternization with the enemy, at least 115 fighting units among British, German, French and Belgian soldiers participated in the spontaneous truce.
Future nature writer Henry Williamson, then a nineteen-year-old private in the London Rifle Brigade, wrote to his mother on Boxing Day:

"Dear Mother, I am writing from the trenches. It is 11 o'clock in the morning. Beside me is a coke fire, opposite me a 'dug-out' (wet) with straw in it. The ground is sloppy in the actual trench, but frozen elsewhere. In my mouth is a pipe presented by the Princess Mary. In the pipe is tobacco. Of course, you say. But wait. In the pipe is German tobacco. Haha, you say, from a prisoner or found in a captured trench. Oh dear, no! From a German soldier. Yes a live German soldier from his own trench. Yesterday the British & Germans met & shook hands in the Ground between the trenches, & exchanged souvenirs, & shook hands. Yes, all day Xmas day, & as I write. Marvelous, isn't it?"

“I remember very well Christmas, I remember the Christmas Day when the German and the French soldiers left their trenches, went to the barbed wire between them with champagne and cigarettes in their hands and had feelings of fraternization and shouted they wanted to finish the war …”

The Christmas Truce of 1914 came close to ending the futile and brutal trench war; but it didn’t…
Eco-psychologists and cultural historians argue that human archetypes rooted in mutual respect, empathy, and cooperation are crucial to our species survival and evolution.
Around 5,500 years ago, small Neolithic villages burgeoned into larger urban “civilizations,” and a new organizational idea emerged, says Bruce Wilson of Popular Resistance:

“What cultural historian Lewis Mumford calls a megamachine, comprised totally of human parts forced to work together to perform tasks on a colossal scale never before imagined. Civilization saw the creation of bureaucracies directed by a power complex of an authority figure (a king) with scribes and messengers, which organized labor machines (masses of workers) to construct pyramids, irrigation systems, and huge grain storage systems among other structures, all enforced by a military. Its features were centralization of power, separation of people into classes, lifetime division of forced labor and slavery, arbitrary inequality of wealth and privilege, and military power and war… We have been stuck for three hundred generations in a model requiring massive obedience to large vertical power complexes.” 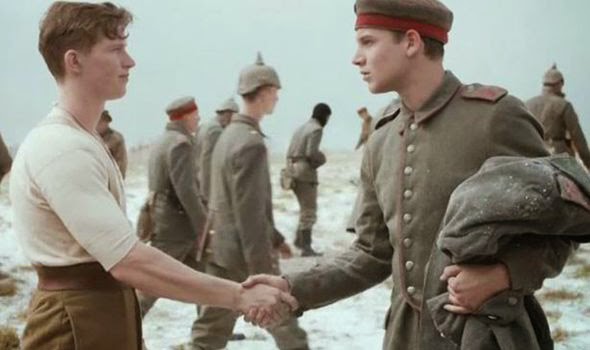 Etienne de la Boetie (1553), founder of modern philosophy in France, tells us that massive civil obedience is required to enable vertical authority structures to prevail, whether in the form of monarchial succession, dictatorship, or democratic selections. Autonomous freedom once enjoyed by peoples in pre-civilization tribal groups have given way to the controlling ideologies of authority structures. These de la Boetie described as oppressive “domination hierarchies” where private property and male subjugation of women prevail, by force if necessary.
The emergence of vertical authority structures, the rule of kings and nobles, ripped people from historical patterns of living in small tribal groups (Theodore Roszak, Mary E. Gomes, and Allen D. Kanner, 1995). Along with forced stratification, the separation of people from their intimate connections with the earth produced deep insecurity, fear, and trauma to the psyche. Ecopyschologists suggest that such fragmentation led to an ecological unconscious.
The 1914 Christmas Truce was a heroic act of disobedience by men, who—recognizing a common belief and trust—refused their orders to fight each other on Christmas Eve and laid down their arms to “fraternize” with their enemy.

“The 1914 Christmas Truce of one hundred years ago was an extraordinary example of how wars can only continue if soldiers agree to fight,” says Bruce Wilson of Popular Resistance:

“It needs to be honored and celebrated, even if it was only a flash of a moment in time. It represents the potential of human disobedience to insane policies. As German poet and playwright Bertolt Brecht proclaimed, General, your tank is a powerful vehicle. It smashes down forests, and crushes a Hundred men. But it has one defect: it needs a driver. If commoners refused en masse to drive the tank of war, the leaders would be left to fight their own battles. They would be brief.”