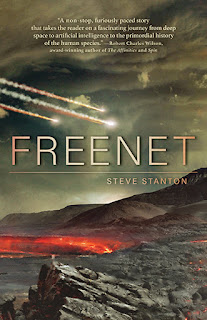 Steve Stanton’s fourth science fiction book Freenet explores humanity in the far future after we have created the “Macpherson Doorway” through folded space-time, and vaulted ourselves with the blink of an eye into a galaxy far far away and 12 million years into the future. No traffic back through the doorway is permitted since a quarantine was placed some dozen years ago to prevent any unwanted DNA from sneaking through from Earth to “New Jerusalem”.

As the back book jacket reveals, Freenet is a novel about the “power of [free] information…in a post-digital age.” The book explores what digital immortality means, when “consciousness has been digitized and cybersouls uploaded to a near-omniscient data-matrix.” This is a world where information “is currency and the truth belongs to whoever has the greatest bandwidth.”

Stanton shared with me that he was inspired to write the novel “from the simple observation of watching a woman lose her cellphone. Young people today are so tied to technology that they freak out when the strings are cut. In the future when life experience is delivered directly to the brain by wi-fi, the personal loss will be catastrophic.”

Told in three parts, the book begins with Simara Ying—a plugged-in V-net jockey and spacer—about to crash-land on the desert planet Bali. Her rescuer, a naïve—almost too nice to be true—native, Zen Valda, introduces her to his cave-dwelling culture with no social network support. The persistent electromagnetic storms of Bali interfere with digital communication and wipe all data. Like a baby removed from her comfortable womb, Simara survives panic attacks and heavy withdrawal chiefly because she is bombarded so heavily with Bali experiences that demand her attention. Lost without the support of her V-net—a comforting web of infinite communication and information—Simara struggles with Bali’s foreign ways. At every turn, she stumbles across some custom or taboo, forced to rely on her own wits; making the kind of mistakes she’s not used to making. More than a simple communication/information tool, the V-net embraces Simara with confidence. Without it, she fears she may go insane.
Intrigue arrives on Bali and chases Simara with a bounty on her head for murder. Zen demonstrates a simple faith in her innocence and helps her escape. Zen accepts a cochlear installation to connect him to the V-net, thinking it will help him better communicate with Simara, who—already somewhat distant—is even more so now that she has reunited with the V-net.  The V-net instead overwhelms him with a surging sea of irrelevant chatter and information, which threatens to drive him insane. Struggling with chaotic information overload, he remains with Simara, even after she estranges herself from him and is captured for murder. They escape and survive an arranged “accident” by literally jumping into space from an abandoned troopship about to crash.

The story deepens into nuanced commentary in the last third of the book when Roni Hendrik, an energetic V-net anchorman of the Daily Buzz, pokes into the intrigue surrounding Simara Ying. He discovers that she is biogenic, an omnidroid—bioengineered from human DNA—and likely smuggled from Earth.

Omnidroids share a major cerebral augmentation that includes unlimited access to the V-net, higher intelligence and an unknown possibility of enhancements, including pre-cognition and telepathy across vast distances. Created as effective firewalls and filters, omnidroids streamline all V-net data for users across the galaxy. “Omnidroids [are] born into zero-day digital space and live in a fantasyland far beyond the mortal sphere of intelligence,” Henrik reflects, sensing a deeper story than a simple murder conspiracy. “Physical experience and bodily sensation [are] only tiny fragments of their transcendent existence, mundane accessories to digital infinity. In time,” Henrik concludes, “life itself might become a vestigial appendage.”

Hendrik, a humanist and closet idealist, pieces together connections with Neurozonics a New Jerusalem private corporation, responsible for the creation of biogenic humans. With holdings in a vast range of areas and an streaming amoeba of interests, Neurozonics is “a grinning spider on a translucent web of intrigue.” One discovery leads Henrik to more. He learns that the omnidroid community, to which Simara belongs, acts and communicates like a hive-mind, guided by a collective voice called “Mothership”. Other omnidroids have been targeted for elimination—and killed. Hell-bent on getting answers, Henrik confronts the owner of Neurozonics, Colin Macpherson—the same Macpherson who created the wormhole. Macpherson was uploaded earlier and runs his empire from digital space, part of the consortium of eternal intellect.

Henrik’s meeting with Colin8 (the seventh clone of the original Colin Macpherson) runs like a “Neo-Architect” lecture in which the truth behind the omnidroids deaths is revealed. It’s not what you might think. Macpherson divulges his vision, which includes the reason for omnidroids’ communication abilities and the role of the Neurozonic brain. The ultimate meaning and use of the omnidroid freenet ties to a greater destiny that redefines what it is to be human and subverts the history of our primordial origins.
The story flows seamlessly from one perspective to another with crisp page-turning narrative, action and intrigue. Stanton trades some richness of character for a page-turning plot and clever dialogue. If there is a weakness in the narrative for me, it lies with Simara, the arcane omnidroid, who remains mysterious—from her introduction aboard her ship about to crash land, to the limited revelations of her character during her interactions with Zen, both in her POV and in his. Considering her unique characteristics and experiences as an omnidroid, I would have enjoyed more insight to her unique outlook and perspective, especially when faced with no social network—perhaps the most frightening experience for an omnidroid: to be disconnected from the hive. On the other hand, Zen Valda as the simple Bali boy on an insane rollercoaster ride is painted with a sensitive and graceful hand. Stanton also skillfully portrays his news team, Roni and Gladyz, with finesse and subtly clever notes. The dialogue and overall interactions between them is some of the most enjoyable of the novel.

Ultimately, Stanton’s Freenet flows like a fresh turbulent river, scouring and building up sediment then meandering like an oxbow into areas that surprise. He lulls you into expectation, based on your own vision of the digital world, then—like a bubble bursting—releases a quantum paradox of wormhole possibility.

Freenet will be available in Canada on April 1 and in USA on April 12. Preorders are open on Amazon in both countries.

Posted by Nina Munteanu at 9:55 AM