It’s been a while since I drank scotch.

The last time was more than several years ago in a dark bar at the foot of Mount Kilimanjaro in Tanzania.

I had just come down the mountain, having barely reached the upper foothills. My friend Margaret and I had abandoned the taxing ascent in favor of a more pleasant and relaxing hike and more time at the local bar. The place was somewhat run down and smelled of burnt plantain and rotting fruit. All they had was scotch. The whisky burned down my throat like a wild fire; its pungent rawness mocked the disappointment that lurked beneath my relief in the abandoned climb. As I nursed my drink over some fried goat’s meat, I decided that I didn’t like scotch. And that was that. Scotch—like the peak of Kilimanjaro—remained elusive.

Many years later, I found myself travelling in Kentucky and sampling its signature drink—Kentucky small batch bourbon whisky. Bourbon is a barrel-aged American whiskey made mainly of corn. Like Champagne, Bourbon is named for the area it was first conceived, known as Old Bourbon (now Bourbon County in Kentucky) and after the French House of Bourbon royal family. The typical bourbon grain mixture, called mash bill, is 70% corn mixed with wheat and/or rye and malted barley. Yeast is added to a sour mash of ground grain and then fermented. This “wash” is then distilled into a clear spirit, which is aged in charred white oak barrels. Bourbon gains color and flavor from the wood as it ages. When I finally graduated to drinking bourbon neat, I learned to look for a premium class sipping whiskey that is a Kentucky Straight (aged at least two years and made entirely in Kentucky) and a single-barreled bourbon (e.g., the bottle comes from an individual aging barrel; not a blend from various different barrels to provide uniformity of color and taste). A good sipping bourbon boasts a very deep and satisfying nose, with a start of caramel and vanilla and a “soft pepper” aftertaste.

Fast forward to a few days ago, as I lounged in the outside patio of the University of Toronto Faculty Club, recently opened for the season. It was early May and a warm breeze brought with it the promise of adventure. The patio provided a cheerful setting as I prepared to celebrate a double birthday—mine and a friend’s—as well as my soon to be released book Water Is… I decided to order a bourbon as I waited for my friend to arrive. Alas! They didn’t have any! What was a girl to do for her birthday and first of many launch celebrations?

“The 16-year old Lagavulin is a lovely scotch,” offered one of the kind patrons as reprieve to my forlorn disappointment. I forgave him for not knowing my legacy with scotch. “Lagavulin is a fine Islay single malt scotch; great for a celebration,” he insisted. Malt scotch whisky is made by the pot still process using malted barley only. And the name Lagavulin, I later found, means “hollow by the mill” (Laggan Mhouillin) in Gaelic.

I demurred at first.

Then, with thoughts of an elusive mountain unclimbed, I agreed and watched Leanne, the manager of the Faculty Club, pour me a dram of intense amber liquid. She left the bottle for me to study and I read the strange description on the front label:

“Moss water, passing over rocky falls, steeped in mountain air and moorland peat, distilled and matured in oak casks exposed to the sea shape Lagavulin’s robust and smoky character. Time, say the Islanders TAKES OUT THE FIRE but LEAVES IN THE WARMTH.”

I inhaled the sharp organic scent of peat
bog with something else not identifiable. Intrigued, I took a sip. The deep musk burned down my throat with a complex fire, warming every cell of my body with stories of ancient peatlands by the sea and rolling acidophillous grassland and marsh—home of the elusive and endangered marsh fritillary butterfly. The complexity of loam, smoke and sweet meadow grass gave way to a long and intense finish of burning sweet caramel: what I imagined a crème brulee would be if it decided to be a liquor. Do the villagers of Islay enjoy crème brulee as much as I do? 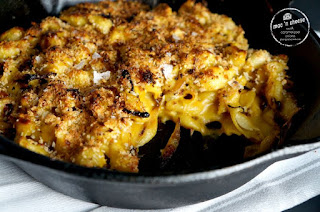 When my friend arrived, we toasted each other’s birthdays and ordered something to go with the scotch. Merridy ordered the warm mushroom salad and I went with the club’s signature macaroni and cheese, baked with spinach and mushrooms. Exquisitely baked and briefly braised on top, the mac and cheese was a divine mate to the 16-year old scotch. A libiamo ne’lieti calici of sharp and salty seashore tempered with the bursting melt of cheese and pasta. A comingling in a lively Verdi duet. I sipped my scotch and dug through the crispy crust of baked cheese pulling out gooey strings of cheddar, parmesan, mushrooms and spinach.

Mac and cheese originated in southern Italy in the 12oos. Liber de coquina, written by someone familiar with the Neapolitan court then under Charles II of Anjou (1248-1309) contains a recipe called de lasanis, purported to be the first “macaroni and cheese” recipe.

Six hundred years later, John Jonston and Archibald Campbell built the Lagavulin distillery—a whitewashed jumble of buildings by the sea—in the village of Lagavulin on the rocky southern shore of the island of Islay, the southernmost of the Inner Hebridean Islands off the west coast of Scotland. Amy Zavatto of Serious Eats describes Islay as a “wild and windswept corner of the world where sheep may well outnumber people and waterproof shoes are your good friend.” Peat, she reminds us, is decomposed organic matter—grass, heather, moss—that forms along the coastal, boggy lands that make up much of Islay. Peat holds moisture and smokes wonderfully when you burn it. And when this is used to truncate the germinating of the little barley bits via heat it flavors the malted barley with a unique perfume. This is called peating whisky. Most of Scotland’s distillers no longer peat their whiskies (preferring oil burners); but Islay still harvest and burn peat to make their whisky.

The Master of Malt writes that Lagavulin is “a much sought-after single malt with the massive peat-smoke that's typical of southern Islay—but also offering richness and a dryness that turns it into a truly interesting dram. The 16 year old has become a benchmark Islay dram from the Lagavulin distillery.” This 16-year spirit has won many awards, including the Whisky of the Year in 2013. Lagavulin is known for its use of slow distillation speed and its pear-shaped pot stills.

The waters of Solum Lochs, along with the peating levels of the barley, help give this scotch its distinctive flavor. In an interview with Eric Knudsen, master distiller Donald Renwick of Lagavulin affirmed that, “The water from the Solum Lochs is obviously important, as it is our own water, good quality with lots of peat in it. However one of the most important parts is the Malted barley (malted at our own Maltings plant on Islay) During the kilning process a peat fire introduces the peat smoke into the malted barley. This gives Lagavulin its distinctive peaty and smoky flavours.”

T he Whisky Exchange writes that, “Lagavulin is not for the faint-hearted but inspires fanatical devotion in its many followers.” Says Zavatto: “Give it a couple of gentle sniffs (e.g., don't go sticking your nose all the way in the glass; there's a lot of alcohol there, so take it in easy!) to take in that first burst of sea spray and smoke, and then try to see what else you find underneath that. I'd recommend that you consider adding a drop or two of water, which you'll find really teases out some of the underlying orchard fruit, citrusy, or caramel-vanilla notes that are lurking beneath the peaty surface. This is, after all, uisge beatha—the water of life. It's worth a wee moment or two to enjoy it.” 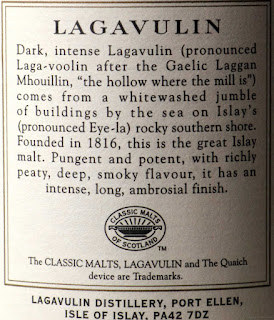 express that smoky character and what some—me included—would describe as a “medicinal” quality. Notes of iodine, seaweed and salt have been used to describe the element that I found deliciously unidentifiable.

It made perfect sense, I finally decided, reminded of what D.H. Lawrence said about water: “Water is H2O, hydrogen two parts, oxygen one; but there is also a third thing that makes it water. And nobody knows what it is.”

So with water; so with scotch. Uisge beatha. 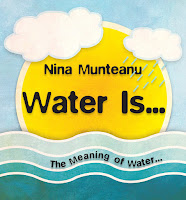 Nina Munteanu is an ecologist and internationally published author of award-nominated speculative novels, short stories and non-fiction. She is co-editor of Europa SF and currently teaches writing courses at George Brown College and the University of Toronto. Visit www.ninamunteanu.ca for the latest on her books. Nina’s recent book is the bilingual “La natura dell’acqua / The Way of Water” (Mincione Edizioni, Rome). Her latest “Water Is…” is currently an Amazon Bestseller and NY Times ‘year in reading’ choice of Margaret Atwood.
Posted by Nina Munteanu at 11:11 AM