In keeping with my old Friday Feature tradition, I'm delighted and honored to feature today a wonderful and tantalizing story by guest author, Adria Laycraft (see her bio after the story).


I had the fortune of colliding into Adria at ConVersion in Calgary last year, and her bright personality and beaming aura told me she was a rising star. I’m sure you’ll find this compelling fable, told in the tradition of oral storytelling, a delightful and thought-provoking read…
Please leave a comment for Adria. Now the story:


One day an old hedge witch set off from her home in the woods to gather herbs for her magiks.


It so happened that she came upon her youngest son. He sat alongside the way, an uncorked wineskin in his lax hands and a blurred look to his eyes. He blinked at her when she stopped before him. “Mother, dear,” he said when he finally recognized her. “Could you spare me a coin or two?”
“And what of the coin I lent you last?” the witch replied. “I’m sure it’s long spent and the swill in your hands is yet another loan.”
The youth hung his head, longish black curls falling into his eyes. The witch shook her head. With such pretty eyes and dark hair, he could be such a charmer. Instead, he chose to be the local drunkard.


“Shameful,” she said aloud, moving on, but she tossed him a coin from her belt purse first.
Not long after, she passed a farmyard. Her middle son sat by the sty, so round he seemed one with the pigs.


“Ah, my second son. Weren’t you to fetch my eggs and milk this morning?”


“Surely, but the way is far, and the farmer gave me three days worth of his eggs and milk, too much to carry home, so I ate it all.”
“How does that help me?” the witch asked, amazed as ever by his complete selfishness.


He shrugged, and the witch wondered why she was even surprised. The boy did naught to help her, yet would not move off into the world on his own, too lazy to leave his mother’s roof.
“Shameful,” she muttered again, moving on, but she tossed him a bun from her basket first.
Not much farther on she came upon her eldest son working his fields with another man.
“Mother!” he cried, setting aside his hoe to greet her. “I hope this pretty day finds you well.”
“It does, at that, but for meeting your brothers,” she replied. “But never mind them, how goes your work?”


“And who is this young man helping you?” she asked, eyeing the fine cut of the boy’s arms, and the broad width of his shoulders.

The eldest son waved the fellow over and clapped him on the back. “This is my new farmhand, Mother,” he said, a broad smile of pride on his face. The poor boy blushed bright pink. “Won’t you sit and share our lunch, or at least a sip from my water jug?”
The witch smiled up at her eldest. How could it be possible to have one such fine son and two such like the others? She patted his arm and shook her head to his offer.


“No, I must be about. It seems I’ll be needing to fetch my own eggs and milk, and I shouldn’t be gone too long, or my meager collection of coins will be plundered as well.”


“I will come by later, then, and bring you some vegetables to hearten your stew,” he said, taking up his hoe. The two young men turned back to their work.


The witch carried on to the river and marshes where she sought her herbs and collected them into a hand-woven basket. It was a warm day, and she sat to rest atop the river’s steep bank.
“My boys be needing their due,” she murmured. “And it is in me to be giving it.”
Reaching about her she gathered some long grasses and, with nimble fingers, she quickly shaped and tied and wove.


Soon she had three simple grass figures. She took up the first and smudged the top with a piece of burnt wood to represent dark hair. Then she raised it up and chanted.
“Curls and swirls, your life is adrift, far from those you would stiff.”


And she tossed the doll into the swift flowing river.


The next morning a certain dark haired youth would wake after an especially good go at the drink to find he was at sea. For years he would ride the ships, scanning the ports, but he would never find his way home again. 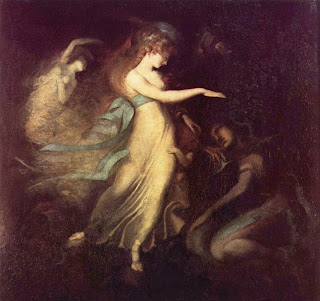 To the next doll the witch added a mound of grass to round out the belly, and spoke again.
“Alone you will be since your help we’ll not see, until a crone comes along, a shrewish wife she’ll be.”
This doll arced through the air to land in the thick underbrush of the riverside willows.


The next day a certain large, slow-moving young man would find himself inexplicably lost in the woods. Wandering for hours, he would finally realize he always returned to one particular stand of willows, so there he would stay, unwilling to try anymore. An old crone would find him there, and care for him, but her ways would be bitter and full of complaining. Many times he would try to leave her, but always his footsteps led back to the cottage in the willows.


Finally the witch took up the last doll and placed a twig on its hand to be his hoe. Smiling, she deftly wove another to be his mate, then two more half size. She hummed while she worked, her talent bringing it all to be.


“No curses for you, but blessings be, for witches do both, though not many see.”
Before she could finish her weaving a sudden shadow covered her. With a gasp she twisted around to find her eldest son standing over her, a frown darkening his face.


“What have you done, Mother?” he said. “Why didn’t you just turn wine to vinegar, and food to dust? You’ve taken it too far, and you were the one to lead them down the very path they walked!”


The flow of angry words faltered and stopped as he took in the four dolls in her hands.


The witch shook off her shock before he could say anything more. “Well, at least I’ve done right for you,” she said, raising the dolls for him to see.
Her son blanched. “Oh, no, Mother, what have you done? I have no interest in this. I am happy with my new man--”


His words failed at the sight of her expression. The witch scrambled to her feet, her stomach twisting with new understanding. Searing disappointment scorched away the last of her hopes.
“Well,” she huffed. “Well, I can change that,” the witch declared. She began to re-weave her spells over the doll with the stick hoe.


“No! Mother, no! I don’t wish to be changed...” He grabbed for the dolls and she yanked them away, causing him to overextend and stumble forward. With a startled yell he tumbled over the cliff and fell head first down the riverbank, landing with a sickening crunch at the bottom. The witch let out a screech at the sight of his utterly still form lying below.
Hot tears burned her cheeks. She scooped up the grass figures and threw them down upon him.
She stood a long while after that, murmuring in quiet rhythm. Small changes came over her features. Lines smoothed along her face, and graying hairs grew blonde in the sunlight.


“Shameful,” she finally said, her head bowed. She turned and made her way back to an empty cottage. She took out her prettiest dress and put up her hair, and emptied her coin box into her belt purse.
She made her way to town, knowing that many strange ships would be in port this time of year. When wives saw her coming down the street they pulled their husbands inside.


That night a handsome sailor had a wonderful time, and the next morning the witch returned back home alone. She rocked and knitted, pausing to pat her tummy every now and then.
“Let’s have a girl this time, shall we?” 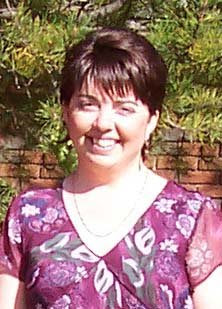 Author Bio:
Adria Laycraft is from Calgary, Alberta, Canada, where she lives with her husband and five-year-old son. She is a graduate of the Odyssey Fantasy Writer's Workshop and a member of the Imaginative Fiction Writer’s Association (IFWA). She likes to write science fiction and fantasy, and she can’t decide which one is her favorite. Pie and cake will go down in history as the funniest food to talk about, thanks to Odyssey, but cookies will forever be closest to her heart.

A super feature. Adria is quite a writer.

Yes, I think so too, Jean-Luc. :)Hey, when's your Christmas party?

Great story, Adria! Thanks for posting it, Nina! Woohoo!

Thanks, Rob. You're new Wake is pretty darned good, too. :)

It was my pleasure, Rob. Cool, story, eh? Thanks for showcasing it here, Adria. We'll have to do lunch next con... :)

So clever. Enjoyed every word.

The party is long gone, Nina. I did send lots of invites out on my Journal.

You mean I MISSED IT?... Me miss a party? Oh, dear! Apologies, Jean-Luc. I'll have to check your journal site for the "damage" ... :) I'm sure it was wonderful. I seem to recall that people were still recovering months after last year's party! :D