It was several days ago, as I was driving home from a friend’s place in the sultry dark of night that I noticed the change…

Perhaps it was the rain and the winding road that nudged my psyche to wander into that other realm. Or was it the motion picture The Fountain that I’d seen the evening before—a surrealistic journey of the mind and the soul through crisis and toward enlightenment, true love and “ever-lasting life”? Or had it more to do with the fact that I’d been, for various reasons, without sleep for over forty hours, that I glimpsed the ordinary in an extra-ordinary light?


Light had everything to do with it, too…Amber traffic lights at a construction site pulsed like living things...smoky clouds billowed over an inky sky…a garish screen of trees, caught in the beams of my car lights as I turned a corner, flashed, Nature recast…a half-built apartment building loomed up like some dark tower in Lord of the Rings… I was reminded of a scene early on in The Fountain where the viewer is disoriented initially by a busy street at night because it was shot upside down. Ironically, the picture was filmed in my hometown of Montreal and I didn’t even recognize it.

Have you ever done that? Looked backward or craned while driving through a familiar scene to gain a different perspective? And felt different for just a moment? Like you’d briefly entered a different dimension and glimpsed “the other”?

I firmly believe that we ultimately define ourselves through our experience and our approach of the unfamiliar. A new relationship. A stranger in town. A different culture. An alien encounter…

How do we react? Is it with fear? Wonder? Curiosity? A mixture of these?

This is why the genre of science fiction so vividly and deeply and satisfyingly explores our humanity. By describing “the other” science fiction writers describe “us”. Who 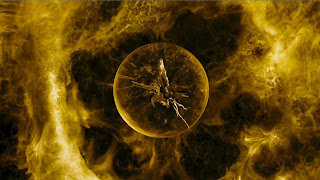 we are and where we might go. It is, after all, through our own eyes that the other is described and viewed.

The very best science fiction does this impeccably. Think of your favorite SF authors and books… Here are some that stand out for me:


I know I’ve left out so many…What are some of your favourites?

There are so many SF authors and books I could name that can shift your sense of reality, but one of my favorites is Samuel Delany's Dhalgren. On a more realistic level, but also mind-changing: David Brin's Earth. Frank Herbert's oeuvre, as a whole.

The Fountain is not recommended for anyone who demands a definitive answer to "What does it all mean?" I was fortunate enough to have caught it in its theater run, and have watched it many times since on DVD.

Ah, neat choices, Catana... Yes, David Brin and Frank Herbert... I haven't read Dhalgren but heard of it. I'll have to pick it up...

I missed the Fountain in the theatre. Must have been mind-blowing to see it on the big screen. Cool! And, yes, the Fountain certainly doesn't answer any questions. The directors were challenged on this very thing and suggested that the question was more important. This is more in keeping with European films that remain open ended, less formulaic and more thought-provoking.

That was an exceptional post, Nina. The Fountain sounds something else, though I haven't heard of it.

I have read a few Wyndham novels. I know there was one where people were hounded if they were not 'perfect'...one had six toes...my mines a little jaded here.

Yes, I think that was the Chrysalids, Jean-Luc... so your mind's perfectly sound there... LOL! It's been a while since I've read it too... HAR!

If you have a chance see the Fountain. It is definitely different... :) If you like Rachel Weitz, she is impeccable in it as the queen and the wife of Hugh Jackman, who plays the conquistador and the surgeon... a wonderful role for him. I must admit that I am a Jackman fan... :D

Nina you find the most interesting photos to include in all your blogs! I look at the photos first before I read. Your choice of photos visually evoked for me what you expressed in this post. It was an eerie feeling as I read.

HAR! Thank you, Anne... Like you, I am very much a visual person and like you I enjoy photography and have an eye for seeing images... so, my writing often reflects that aspect in me... :) Another friend of mine noted how the two flowed together in this post ... the images and the writing (well, I wrote the post while still sleep-deprived... HAR, so that may have had something to do with it! LOL!)

Also brings to mind my post on writing and painting... :)

Beautiful photos and interesting post. I loved the way you wrote about looking at things in a different way and what that can mean.

Thanks, Mountain Woman... That post generated a few very interesting discussions among my friends... who are looking at me differently too... LOL! Opening doors...More on this topic in later posts... :)

Wow! Someone else mentioned Delany's "Dhalgren" before I could! Well done, Catana! This is also one of my favorites - a novel that has haunted me ever since I first managed to read it all the way through some 25 years ago.

A great post, Nina. I must look out for The Fountain - sounds intriguing!

Thanks, Bob... Yes, do look for The Fountain. It is a worthwhile piece of art... not "of this earth" and worth discussing with friends over a cup of java or a good red wine, a Pinot Noir, preferably in a candle-lit room...sharing a New York cheesecake... :)