Fall on the Little Rouge River 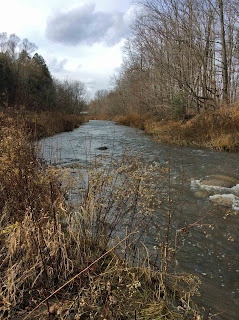 Yesterday, I drove to the Little Rouge River woodland park to experience Nature for several hours. I had discovered the park by chance this spring and was totally enchanted by the rich and pristine woodland along the little river; I now wished to explore more of the woodland’s phenology: this time draped in fall colours.

It’s a half-hour drive to the woodlands area from where I am currently cat-sitting. The drive is mostly through suburbia until I emerge into open country and farmland. The park entrance lies off a small road with no obvious sign. I park the car and see that I’m the only one there. Then I make my way to the path alongside the river, noting several older maples, oaks and white willows (Salix alba) along the forest edge. The wind has shaken all the willow's yellowed lanceolate leaves onto the ground; The tall many-branched trees stand with deeply furrowed shaggy bark that looks like interlocking ropes; watersprouts spring out of the lower trunks. 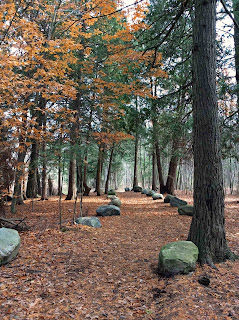 The mixed woodland I’m walking through lies in the Carolinian forest region— a diverse mix of willow / Manitoba maple / cedar bottomland, with red oak / hemlock / white cedar slopes and hemlock/white pine/sugar maple/beech/black cherry/red oak tableland. The path leads me through snaking roots beneath the fresh aroma of pine and cedar. I make my way toward the banks of the river where beech and maple bow over the chortling water.

The forest is now a mix of colour. Most of the deciduous trees have stripped off their leaves in a revealing show of textured grays, gray-browns and blacks. The bare trunks and fractal branches contrast with the deep greens of the conifers. Rogue trees—like the oak and beech—still claim their leaves, adding deep russet tones to the varied grays and deep greens of the canopy. The forest is now more open, emerging from a soft brown carpet on the ground. 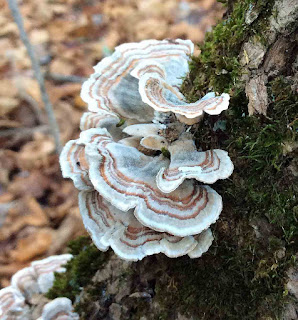 The air is fresh with the scent of loam, decaying leaves and saprophyte activity. I have the whole place to myself—that is, along with scolding chipmunks, scampering squirrels, tapping woodpeckers and the like.

I am looking for the old sugar maple I’d spent time with this past spring. After several bends in the river, I see it, leaning precipitously over the river bank like an old man sharing an intimate story. It has already lost its leaves; they cover the ground in a soft carpet of maple leaves. The old tree literally hugs the bank with its roots; like a carved figurehead hugs the prow of a great tall ship.

Eager to see my old friend up close, I scramble down the overhanging bank using the old maple’s root “stairway,” then ungracefully drop onto the cobbles below. I do a scrambling dance not to slide into the river (that will come later) and gaze at my prize.

There it is! My shaggy gnarly old maple. What a splendid tree! Every part of it is splendid. I gaze up at its shaggy trunk, stretched up in a long bow, with typical silhouette of branching out arms that every Canadian kid drew when they were six. I gaze down at the horizontal roots that stretch out to hug the bank. They stitch the bank together with their tangle of ropes, keeping it intact.

Science tells me that all the trees of a forest are really one organism, connected by roots and the microorganisms inhabiting them, communicating through the micorrhyzae in the ground and the hundreds of aerosols the trees exhale every second of every day. If you sit long enough in the forest you will start to feel this too. You will breathe it in. And in doing so, you will realize that we are all connected and we are all one.

Feeling the need to get to the other side of my maple, I do a kind of contortion to scramble beneath its bow and get around it. I stumble through the loose cobble and finally splash into the river as the cobble rolls out from under me. But I cheer myself; I’ve reached the other side of my tree. From this vantage, I note several large burls at breast height on the maple’s trunk and extensive aerial roots. Dead branches drop off healthy trees all the time, and wood knots appear in the trunk and roots where branches have died. These burls are the result of self-pruning—particularly on the river-side—when the tree drops its lower branches as it reaches maturity.

Refreshed and joyful after visiting my maple, I scramble up the bank and resume my walk through the woodland. I pass an opened stand of beeches that have left a thick monopoly of beech leaves on the ground. There are more maples and red and white oaks—their splendid overall forms proudly revealed. I spot other trees and shrubs and try to identify each using the tools now presented to me: the bark of the tree trunk; the overall form of the tree; the now visible branches (whether they are oppositely or alternately branched); the clues left on the ground in the litter of leaves, nuts and seeds.

The trunk of the Yellow Birch (Betula alleghaniensis) peel off in curls of amber-gray. I remember my botany professor at Concordia demonstrating that if you scrape a twig with your finger nail, the twig emits a strong wintergreen scent.

The bark of a mature Ash (Fraxinus sp.) is tightly woven in a distinct pattern of diamond-shaped ridges. The ash tree, like the maple, also branches in pairs, not alternately. There are, in fact, few tree groups that show an opposite branching pattern like the ash and the maple.

The various species of maple in the Little Rouge woodland appear healthy; they grow tall in good loam and are thick with leaves and seeds and are surrounded by healthy community of trees, making up a flourishing and highly functional forest ecosystem.

But there are concerns for climate-induced impacts on the sugar maple in southern Ontario and Quebec. Concerns that were raised already in the 1950s and have resurfaced in recent reports of a declining maple syrup industry.

In January of 2018 scientists published a study in the journal Ecology on how the fate of maple trees is threatened by climate change. The growth of sugar maple trees will be stunted over the decades by climate change through warmer and drier growing seasons. Their examination of 20 years of tree and soil data in four Michigan locations, found that, despite increased nitrogen from agricultural runoff for growth, lack of water will drive the negative impact on maples growth.

Lead researcher Inés Ibáñez, ecology professor at the University of Michigan, used climate modeling to forecast the fate of sugar maples if nothing is done to curb greenhouse gas emissions. "The biggest trees will still be there, but won't be growing as much and the little saplings won't survive, [so] once the older trees start dying, there will be no new trees to replace them," she says. Sugar maple habitat is at great risk of decline as well. Scientists have projected that in southern Ontario, some of the highest occurrences of sugar maple stands also show the strongest potential to decline under climate change.

Decades ago (in 1980s), when only scientists were talking about climate change, reports of sugar maple decline in rural Ontario since the 1950s was shown to be caused not just by overcutting (leading to over-exposure) and over grazing by animals; their decline was also linked to acidic atmospheric deposition, disease and insect infestation—all resulting from a changing climate.
Scientists Scott Bailey (a geologist/soil scientist), Steve Horsley (a forest physiologist), Bob Long (a plant pathologist), and Rich Hallett (an expert in foliar chemistry)—who have been studying sugar maple decline since 1995—agree that climate change and milder winters contribute to the insect infestations threatening sugar maples. Historically, native insects are on a cycle of population growth and decline every 10 – 20 years. “What’s been happening instead,” Bailey said, “is that species are going away and coming back every 3-4 years.” Research does show that maples are resilient if the soil contains adequate nutrition. Sugar maples require a lot of nutrients in their soil to help them grow, cope with disease, and provide internal signaling (i.e. when to seal off decay or injury, when to take up water). 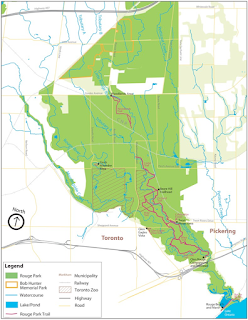 Little Rouge woodland is part of the extensive Rouge Park. Alternatives Journal calls the Rouge Park the largest urban park in Canada. “Totalling 79.1 square kilometres, Rouge National Urban Park contains multitudes of wildlife, rivers, flora and fauna,” writes Andrew Reeves in his article. Protected areas alone can’t safeguard all species, “there’s a need for wildlife to have room to roam through the landscape beyond the boundaries of a park,” said Alison Woodley, national director of CPAWS’s Parks Program when interviewed by Reeves. “They need that kind of corridor to move through.” Preserving ecological corridors is especially vital in southern Ontario, writes Reeves. Once blanketed in Carolinian forest, southern Ontario retains just 15 percent of the highly biodiverse Carolinian land it once did. “Fly across southern Ontario today and the occasional woodlot or tree line along a stream are about all that remain of the Carolinian ecosystem,” wrote author Chris Wood on the vanishing ecozone for The Tyee. The scraps of marginal forest remaining are so fragmented and miniscule they’re almost useless, writes Reeves. It wasn’t until 1984 that the Rouge Valley was formally recognized as a critical slice of Carolinian forest. Today, Rouge Park remains, next to Point Pelee National Park, one of the largest intact Carolinian zones left in Canada.

Standing among the maples and beeches of the Little Rouge woodland, I felt grateful for this natural reserve. As I made my way back through the stand of oak, pine and cedar, it started to snow. 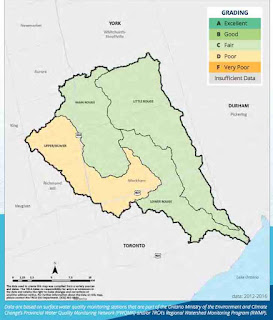 The Rouge River watershed is home to 1,700 species of animals and plants; more than 20 are classified as species at risk. While the forest shows a healthy diversity and the river appears pristine—supporting a healthy fish and benthos population—the woodland was once logged and farmed; continued disturbance is demonstrated by flourishing invasive species such as black locust on the forest’s ecotone. As development further encroaches from all sides, this gem of natural beauty will continue to be at risk. In 2018, the TRCA gave the Rouge River watershed an overall ‘C’ grade for surface water quality, the same as the previous report card in 2013. The Little Rouge also received a ‘C’ grade. This was based on concentrations of phosphorus (from agricultural runoff), presence of bacteria, and the kind and abundance of benthic invertebrates found in 24 stations throughout the watershed. Chloride concentrations—thought not part of the grade—were high throughout the watershed, including the Little Rouge River, where concentrations at times came close to exceeding the guideline of 120 mg/L. Chloride typically comes from road salt and can harm many aquatic life forms, particularly the benthic invertebrates, which are food for fish.