Get Your Dose of Nature … And Feel Better

This past October, good friend and naturalist/phenologist Merridy Cox took a group of us on a nature walk in Earl Bales Park, located south of Sheppard Avenue W and east of Bathurst Street in North York, Ontario. Earl Bales Park spans 127 acres (51 hectares) of natural park and features a dogs off-leash area, playgrounds, a sensory garden, splash pad, outdoor amphitheatre, memorials, paved walking/cycling trails, picnic sites and fire pits. The park also has one of the two Ski & Snowboard Centres run by the City of Toronto. I parked off Don River Blvd and found the group gathering at the head of the trail.

It was a brisk 6 degrees out as Merridy led us along the main trail through a mixed woodland of black walnut, ash, maple and paper birch.

Merridy stopped beside a sumac shrub, leaves and berries now a brilliant red, and invited everyone to experience the forest with all our senses—including taste. The sumac’s deep red berries are dried and ground into a coarse powder as a spice in the Middle East. I’ve used ground sumac in many of my salads and dishes with poultry to add a “pop of colour and taste”; so, I wasn’t surprised when I detected tangy lemon—even in the leaf.

Another example of “tasting” the forest are the twigs of the birch tree—particularly the yellow and black birch—which, when scraped with a knife (or chewed with your teeth) will give off a strong wintergreen smell due to methyl salicylate produced in the bark.

We strolled along a wide path that led to a pair of murky settling ponds with a colourful view of the forested hills of the park. Filtering the surrounding storm water runoff, the marshy ponds eventually flow to the Don River. We looped back via an enchanting side-path of cedar and hemlock, overseen by a well-established maple upland forest.

At the beginning of the walk, Merridy instructed everyone to stay silent and focus on their environment. She suggested that each person find something of interest in the forest and be ready to share their discovery at our lunch spot by the ponds. Mine was the ubiquitous Queen Anne’s Lace, now gone to seed. Merridy showed us how its outer “basket” enclosed the cornucopia of seeds inside. Essentially, the large flower head had become a dried cluster of 70 or so smaller clusters with 20 or so seeds—each sticky and light enough to be blown great distances to find some animal to stick to and disperse it even further.

According to Legend mavens, Queen Anne, the wife of King James I, was challenged by her friends to create lace as beautiful as a flower. While making the lace, she pricked her finger, and it’s said that the purple-red flower in the center of Queen Anne’s Lace represents a droplet of her blood. But Merridy has another version of this story, and you must ask her. This plant, considered a weed by most, is also called Wild Carrot, given it is the wild progenitor of today’s carrot.

Merridy was using elements of her booklet “Nature Breaks for Busy Urbanites: Five Doses of Relaxation” to connect people with nature. The booklet provides five steps to help those wishing to reacquaint themselves with the natural world around them. “Walking every day for a few minutes in a park or along a trail preserves our health,” writes Merridy. “The benefit is not just from walking but from the very act of gathering in the scents, sounds, and the feel of the natural world.” In her booklet, Merridy prescribes an easy stepwise emersion in Nature through five steps with associated “dose” of relaxing Nature. Step One, for instance—which is 5-10 minutes in Nature—is a dose that is good to see you through the work day.

Step One is a dose of 5-10 minutes in Nature, once per day. Given our busy lives in the city, this obviously means finding Nature in the city: urban forests, parks and parkettes. This is, in fact, a critical step; it’s the first step toward turning to Nature and connecting in some way. Merridy recommends practicing breathing, listening to bird song and focusing your eyes on natural things, both stationary and moving: clouds, trees, birds, squirrels and other little things. This first step is key to training your senses of the natural world. It will take some practice (to filter out the city sounds) but soon the natural world will make itself known to you.

Step Two is a dose of 20-30 minutes in Nature, two or three times per week. This might be during a lunch hour or other break long enough to permit a longer walk. This entails you finding a suitable area and park to walk to and through. This might include walking to and from work through a different route. “Create a destination, such as a landmark tree, rock, or architectural structure,” says Merridy. During your walk, she recommends looking for natural phenomena. Hone your skills from Step One; she suggests taking an observation and looking for change over the times you visit. For instance, a tree over the seasons. What the wildlife are doing. Cloud-gazing is one of my favourite things to do.

Step Three is a dose of 2-3 hours in Nature, once per week. This is easily done, because you can incorporate your day-off time into this pursuit. It may include some driving time to get to a natural park outside of town. If so, try to find an easeful way to get there. For example, I currently live in Toronto and I discovered the Little Rouge River woodland and the Rouge River park nestled within farmland outside of Markham. The route I’d initially navigated was through the miasma of endless suburbia. I then chanced upon an alternative route: the 401 Highway to Morningside then Old Finch Road, a charming little winding road that led me along the high cliffs off the Rouge and eventually to the Little Rouge. This made the entire trip relaxing and wonderful. I’ve been regularly walking the trails since.

Merridy writes: “A red leaf, a splash of water, a fish jumping, a white gull against a blue sky—all of these are moments of grace, a gift from Nature that takes you outside of yourself and lets your heart soar.” The effect on your sense of well-being and ability to accomplish things is palpable.

Step Four is a dose of one full day in Nature, once every two weeks. While she doesn’t specify, I assume this means at least four hours—possibly six or more hours of Nature experience. Long enough for a totally immersive experience. Merridy writes: “You may come away with a memorable meeting with a wild animal; you may find a copse of woods filled with radiant bird song; you may be inspired to write a poem or draw a landscape.”

Step Five is a dose of a whole weekend in Nature, once every month. With this kind of immersive potential, Merridy suggests being mindful of natural rhythms, the diurnal motions of sun and wind. You can pursue “forest bathing”, explore more deeply by returning to the same place over each day. You have the chance to truly study Nature using field guides. You can create poems, write letters to friends, sketch or paint. Look for solitude and simply “be.” I enjoy my longer moments in the forest or meadow, when my quietness allows Nature to return to its natural rhythms and the wild animals ignore me to go about their business.

It has long been proven that a human’s well-being is enhanced and maintained through personal experience with the natural elements. A forest. A stream. A meadow. A mountain. 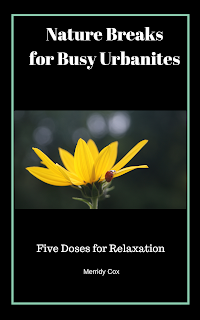 “Nature Breaks for Busy Urbanites: Five Doses of Relaxation” will be available on Amazon for Christmas.
Posted by Nina Munteanu at 11:21 AM

Email ThisBlogThis!Share to TwitterShare to FacebookShare to Pinterest
Labels: dose of nature, forest and health, forest and wellness, forest bathing, learning from nature, nature, nature walk, walk in a forest