Does ‘Dark Matter’ to Philip Pullman?...


Dark Matter… “Dust” … call it what you want… It makes up 90 percent of our universe, according to astronomers. This makes the kind of matter that you and I see rather exotic; while we must accept the existence of the most common element, dark matter, on ... well ... faith. You see (oh, another bad pun!), dark matter doesn’t emit or reflect light and doesn’t interact with what we think of as ordinary matter. Yet, this invisible particle is faithfully being credited with playing a crucial role in shaping the visible cosmos. Dark matter is some form of matter theorized to exist that cannot be observed by radio, infrared, optical, ultraviolet, x-ray or gamma-ray telescopes and is theorized to be MACHOS, WIMPS, or GAS (see this site for more info on this incredible particle).


Dark matter only reveals its presence by its gravitational effects, guiding the evolution of the early universe and still affecting the motion of galaxies, according to astrophysicists.

Discover Magazine (Jan, 2008 issue) reported that “scientists now believe that during the early universe, dark matter provided the gravitational scaffolding on which ordinary matter surrounding them should have clumped together into hundreds of small satellite galaxies, most of which should have survived today." But the observed number of satellite galaxies is only a fraction of what the theory predicted. Astronomers call it the missing satellite problem. 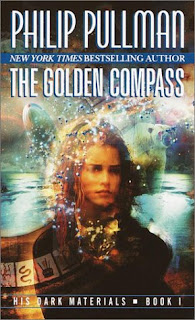 So, what does author Philip Pullman have to do with dark matter and why should he care?...This is the Philip Pullman of the His Dark Materials trilogy with his first installment, The Golden Compass, now a deliciously controversial major motion picture (which I will be reviewing as soon as I see it--very soon)… Well…Consider the title of his series, His Dark Materials. While Pullman certainly borrows his title as well as his overarching theme from Milton’s epic poem, Paradise Lost, Pullman’s title and his magical particle, Dust, also takes the concept of dark matter from real science. The mysterious material called “Dust”, which ‘speaks’ through Lyra’s aletheometer is also known as “dark matter” in an alternative ‘parallel universe’ of Pullman’s book.

I find it rather curious and ironic that The Golden Compass opened this December, so close to Christmas, a religious holiday when Christians all around the world are gearing up to celebrate the birth of Jesus Christ. The irony lies in the fact that so many Christian weblogs have been vilifying Pullman as not only being an atheist (which is anyone’s prerogative, after all) but for promoting 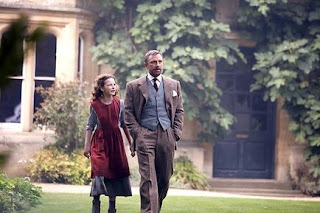 anti-God sentiments and atheism to children. However, despite the fact that Pullman adamantly opposes religious authoritarianism, his books uphold the important values of love and sacrifice. And faith (I’ll get back to that later). What I both enjoy and find compelling in a controversy (and Pullman’s particularly) is that at its core lies a challenge to ALL parties to re-evaluate their position amidst new information. A controversy is ultimately a learning experience for all involved. Controversies, like good art, invite the collision of diametric opposed ideas, and provide a nexus point for discussion, change, and—if all are respectful—eventual redemption and reconciliation.

According to Mike Todd of the Vancouver Sun (Dec. 8, 207) three major themes in Pullman’s books enmesh potential controversies surrounding science, art and religion. For instance, Pullman meant for the sinister organization known as the “Magisterium” to represent all ideology-driven theocracies or dictatorships, including secular ones. The concept in Pullman’s book of the “Authority”, who the two child protagonists help to defeat, led to accusations that Pullman advocates the “death of God”. I don’t think he meant this at all. Donna Freitas, a Catholic feminist professor at Boston University calls Pullman “a liberation theologian”, freeing Christians from the traditional church image of an all-powerful tyrant God who “rules from the clouds.” (Douglas Todd, Vancouver Sun, Dec. 8, 2007). Then there is “Dust”, elemental particles (resembling dark matter) that appear to contain a kind of conscious energy, experiments on which the church (in the book) prohibits. Pullman’s own ‘faith’ in these particles can be suggested in his admission to following “panexperientialism”, a philosophy that suggests that all living things, even molecules, have traces of consciousness (shades of Sheldrake’s ideas, autopoiesis and local fields). Another author who explores this concept is SF author, Greg Bear (see his Darwin’s Radio and Darwin’s Children).

Donna Freitas, in Killing the Imposter God, suggested that Dust acted in Pullman’s trilogy as the “divine fabric of the universe.” Could Dark Matter do the same?... Aren’t we all creatures of light…and dark, after all?...

Pullman’s humble and passionate appreciation for the power of the story (and the muse) is reflected in this quote from his autobiographical essay: “I was sure that I was going to write stories myself when I grew up. It’s important to put it like that: not ‘I am a writer’ but rather ‘I write stories’. If you put the emphasis on yourself rather than your work, you’re in danger of thinking that you’re the most important thing. But you’re not. The story is what matters and you’re only the servant, and your job is to get it out on time and in good order.”

That's true, Nina. I haven't seen the movie or read the books, but it has been said that the novels have an 'anti-God' message due to Pullman's aethiest beliefs. Because they are essentially children's novels, many don't like them reading it. The religious element has been toned down in the film, which has angered Pullman. Nicole Kidman, a staunch Roman Catholic, has said she stands by the film.

There are varied views about what the book stands for, and is clearly open to interpretation. People will judge them how they wish to.

Yes, there is certainly room for much personal interpretation. Good art does that; allows you to derive your own metaphoric meanings in it. I am looking forward to discussions on this film, particularly within my community here. We are a mixed bag of spiritual, religious, and agnostics...

Great post...I think sometimes people get a little to worried about the effect of entertainment. I personally get tired of the church being so sensitive to this stuff...I say that as a non-religious person. If they're strong in their faith this kind of thing wouldn't make a difference to them.