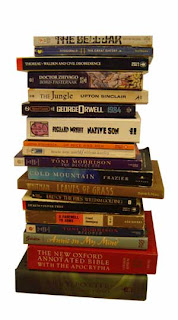 For today’s Friday Feature, I’m showcasing Canada’s largest genre book publisher, Edge Science Fiction Publishing. It wasn’t always so…In fact, it wasn’t until a recent merger with Tesseracts and then with Dragon Moon Press, both now imprints of Hades Publications, that this dynamic publishing house gained its new notoriety. Notoriety?...Well, let me begin with the beginning…

A press devoted to Science Fiction and Fantasy literature seemed like a natural extension to Brian Hades' previous experiences in publishing books on theater, magic and the performing arts. Over a mug of hot chocolate (now standard at all planning meetings), he worked out a business model that would both establish EDGE Science Fiction and Fantasy Publishing and allow for its future development as a well-established genre publishing house.

In a 2006 interview with Celu Amberstone at SF Canada, Hades explained ho

w EDGE got started: “…The idea of starting a dedicated SF&F publishing house began in the mid 1980's—and was spurred on by a January 1989 Quill and Quire article entitled "SF: Welcome to the Golden Ghetto". The article featured a very young bookseller-turned- author by the name of Tanya Huff. Unfortunately the Canadian market for science fiction and fantasy was very small at that time and there really wasn’t that much opportunity for a new publishing venture. EDGE had to wait for better times.” Then in 1997 Hades met Lynn Jennyc at a meeting of local independent publishers and they started assembling the building blocks that, one year later, became EDGE Science Fiction and Fantasy Publishing.


Since its award winning publication of Marie Jakober's "The Black Chalice" in 2002, life has been on high speed for this Calgary publishing company. It quickly gained recognition from readers and writers alike for its critical selection of engaging speculative fiction. EDGE's authors come from Canada, the USA, New Zealand and Australia and have garnered world wide recognition and by winning a number of awards; including a Canadian Aurora Award and Australian Aurealis Award and an American ForeWord Magazine Award.


In 2003, EDGE acquired Tesseract Books, the publisher of the highly respected and extremely popular "Tesseracts" anthology of Canadian short speculative fiction. Since its inception 22 years ago, the Tesseracts anthology has featured 344 short works and more than 200 Canadian authors, editors and translators -- including such well known writers as Margaret Atwood, Robert J. Sawyer, Spider Robinson, and William Gibson, to name a few.

Dragon Moon Press came into being in 1993, when Gwen Gades opted against law school after finishing her BA in history. At the suggestion of one of her professors, she decided to incorporate her love for science fiction and fantasy into a career as a publisher. 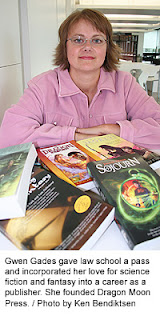 The name for her publishing company came in a dream, according to an article by J.J. Rahn in On Campus (University of Calgary). Gades recalls being struck by inspiration in the middle of the night with the image of a dragon—an archetype of fantasy—and the moon—a standard of science fiction—coming together as one.


Since the first printing of "Daughter of Dragons" in 1997, Dragon Moon Press has established itself as a leading Canadian publishing house whose dedication to first time authors and writers of literary excellence earned the company a place in the hearts of readers around the globe. The company has produced a number of books over the years, including the very popular "Complete Guide" series, which includes three guides to writing Fantasy and a soon-to-be-released guide to writing Science Fiction, plus an number of award-winners, including this year's top prize in the ForeWord Magazine Award.


Tee Morris, one of Dragon Moon Press’s authors refers to Gades as a woman bent on world domination. Gades says her goal is somewhat smaller—to capture enough of the market to expand to a mid-sized press. The merger with EDGE has, no doubt, provided her with this. In the short term she reflects, “I’d like to walk into any bookstore and find our books on the shelves, have a few breakout authors make the leap to big presses and be able to say ‘Oh, I discovered him/her’!”


Now with the merger of EDGE Science Fiction and Fantasy Publications, Tesseract Books and Dragon Moon Press, this publishing house now has more than 90 titles in print, making it Canada's largest genre-specific publisher. Brian Hades and Gwen Gades (Geez, their names rhyme—they MUST belong together!) expressed their delight with the merger or Vulcan "Mind Meld" of Literary Proportions, as they called it: "We are both committed to producing quality books which feature today's best Science Fiction and Fantasy authors. We know readers will find a wonderful variety of both short fiction and novel length books to choose from ... including works by some of the world's finest writers."


They are celebrating, folks! And well they should! You can get in on the celebration. EDGE is putting on one heck of a Christmas sale on some of its books. Some are going for as little as 50% off regular price. My book, Darwin’s Paradox, is even selling for less! Check it out here.


As for notoriety…well, have you never attended a science fiction & fantasy convention and heard Brian sing SF karaoke? Or seen his vivacious wife, Anita (a ball of fire, by the way) dance the Lambada? Or experienced Gwen Gades’s rendition of a gold Bratislavian dragon hunting prey?...Well!... In my scientific career as a consultant and field scientist, we have an unspoken rule that “what goes into the field stays in the field.” If I were to follow the same code of ethics here, I had better shut my mouth right now…(big smile, though…I like all red wines and the finest quality chocolate…hint, hint…)
Posted by Nina Munteanu at 12:35 AM

A good feature on your publishers. They seem quite an influential group.

They're sure getting that way! :) What's neat, Jean-Luc, is that they still have the home-spun feel of a small publisher (friendly, accessible, with a lot of freedom for the author and opportunities to participate in product creation--like cover art--that larger publishing houses usually don't give)