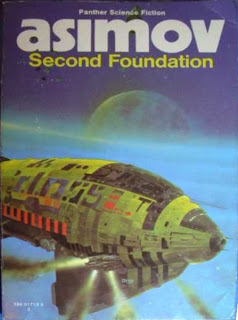 Thanks to my friend, Josh, I became aware of a strange article by Giles Foden, which appeared in the Guardian in 2002 that linked classic SF writer Isaac Asimov to the al-Qaida. WHAT? You may very well ask. Entitled, “War of the Worlds” Foden's article in the Guardian cites an item that appeared in an authoritative Russian studies website claiming that Isaac Asimov’s 1951 classic Foundation was translated into Arabic under the title of “al-Qaida”; and, furthermore, that Bin Laden may have been inspired by the novel.

Okay…bizarre as it may seem, here is some of the foundation (pardon my awful pun) for this assertion:

The Arabic word qaida means “base” or “foundation”. It is also used for “groundwork” and “basis” and is employed in the sense of a military or naval base or chemical formulae and geometry (e.g., the base of a pyramid). Qaida comes from the root verb meaning to sit down, remain, stay, abide. So, where does Asimov’s Foundation come in? Dmitri Gusev, the scientist who posted the Russian article asserted that “this peculiar coincidence would be of little interest if not for the abundant parallels between the plot of Asimov’s book and the events unfolding now,” referring to the pursuits of the al-Qaida. Nick Mamatas argued in an article on sci-fans in Gadfly magazine, “even the terror of September 11th had science fictional overtones: it was both an attack on New York from a tin-plated overlord with delusions of grandeur and a single cataclysmic event that seemingly changed everything, forever.” Says Giles Foden of the Guardian, “intelligent idealists who are also psychopaths might find comfort in a fictional role model—especially one created by a novelist famous for castigating that ‘amiable dunce’ Ronald Reagan: the president that prosecuted the CIA’s secret war in Afghanistan.”

I had to dig out my copy of the 1951 classic and re-read it; I’d forgotten much of the book. Asimov’s acclaimed Foundation series is an epic written over forty years and consists of seven volumes with a total of fifteen novels and dozens of short stories (and 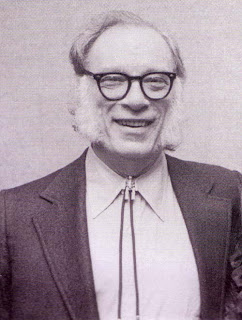 six stories written by other authors after his death, including Greg Bear and David Brin).

The Empire portrayed in Asimov’s Foundation is in turmoil (Asimov cited Gibbon’s Decline and Fall of the Roman Empire as an influence). The protagonist, Hari Seldon, is portrayed as the spark of creative effort in the gathering decay of an over-consumptive, corrupt and inefficient bloated empire. A scientist and prophet, who predicts the Empire’s fall, Seldon sets up his Foundation in a remote corner of the galaxy, intending to build a new civilization from the ruins of the old one. Of course, the Empire attacks the Foundation and tries to crush it. Seldon ascribes to religion (based on scientific illusionism) to further his mission. Hari Seldon’s concept of psychohistory gives the events in the saga a sense of rational fatalism, leaving little room for open moralization—which Asimov shies away from generally—as events unfold as inevitable and necessary. The Foundation, for instance, slides gradually into oligarchy and dictatorship prior to being conquered by Mule, an empathic/telepath with his own designs for the Foundation.

Similarities between Seldon and Bin Laden apparently abound, according to the Guardian: like Bin Laden, Seldon transmits videotaped messages for his followers, recorded in advance’ Seldon’s vision appears similar to Bin Laden’s campaigns. “Did [Bin Laden] realize much earlier than anyone else that the march of globalization would provide opportunities for those who wanted to rouse and exploit the dispossessed?” asks Foden. Muslim intellectual, Yussuf Samahah, in the Arab newspaper al-Hayat said, “anyone who believes that [Bin Laden’s] ideas and the new phenonomen [globalization] are contradictory would be mistaken, because while globalization is gradually uniting the planet, it is causing many introverted and revivalist reactions which use the tools that globalization provides to give the impression that they are not only fighting it but will ultimately defeat it.” According to Foden, “Asimov’s Hari Seldon worked on exactly such principals, taking into account, across time, the dynamic between intergalactic megatrends and local reactions to them.”

Bin Laden consumed many western products as a young man and may well have read the fabled translated version of Foundation, though the Guardian points out that no copy is definitively known to have been translated. Foden provides other examples of sects that are apparently trying to build a community of scientists modeled on the members of Asimov’s Foundation. For instance, Japan’s Aum Shinrikyo’s “bible was… the Foundation series by Isaac Asimov,” said David Kaplan, author of the Cult at the End of the World. Foden asserted that “the space opera sub-genre of science fiction offers the possibility of a massive expansion of self-mythologizing will-to-power.”

There are other examples of books (whether in science fiction or not) that according to Foden “fueled the swollen fantasies of the murderous”. Heinlein’s Stranger in a Strange Land apparently inspired Charles Manson. I am reminded of the Unabomber, Ted Kaczynski, a luddite who had purportedly read Conrad’s Secret Agent a dozen times and modeled himself on Conrad’s anarchist.

Should we be concerned about the supposed disastrous influence of our prominent science fiction novels? I think not. I hope not. We can no more predict the effect, whether negative or positive, of a great work of art than we can predict our personal future. All great works of art will affect us in profound ways that speak to our cultural identities, the evolution of humanity, the soul and each of our personal destinies. For better or worse, great fiction will inspire us in ways that move us to act, to be, to love and to change. How each of us is affected depends upon our worldview and our perspective on life. Do we live our lives in hope or in fear?
Posted by Nina Munteanu at 1:26 AM

I've read the original 'Foundation' myself.

I think a fanatic will ALWAYS find something which he can claim inspired him. The truth is, it was in his make-up all the time.

Your Party entry is up now, Nina.

Thanks for the insightful comment, Jean-Luc. I agree with you. It is interesting to ponder where people draw their inspiration from though, isn't it?

Hi Nina,
Stopped by to see how our author was doing. Have you started your next book yet. :)

Oh, have I ever, Princess! Thanks for asking... I'm currently marketing a trilogy (space opera SF/fantasy about a galactic cop investigating a spiritual cult massacre). I am now 3/4 through on a historical SF set in medieval Prussia that weaves a timeless coming-of-age tale, taking the reader first to future Paris then back through the 1st and 2nd world wars of an alternate reality... I'm certain that I'm enjoying it all too much!

Great analysis. It makes sense that some elements of a 'grand epic' would be reflected in reality. Sci-Fi often projects itself into the future logically. Certain innovations in technology, conflict and social interaction will always come about.

Yes, I so agree with you, c'bs alife... You would think that, given the premise "what if" in most SF works, there would be more "predictions" recognized... Having said that, this is why visionary SF authors such as Greg Bear, and others, are often invited to sit in on government task force think tanks for future plans.

I like Isaac Asimov's books. He was inspired to write Mr Spock is Dreamy by his daughter. She blurted out her affections for Spock when he came on TV. Thats when it clicked with her dad, Isaac Asimov that women prefer smart guys. Funny really, the dude was already married by then.

I know you wrote this in 2007 and it's 2011 now, but your comments about the Foundation fascinate me.

I haven't read Asimov in years, but just a few weeks ago Julian Assange hit the headlines with Wikileaks.

Assange reminds me of the Mule because he's apparently come from nowhere and breaks all the "rules", spoken and unspoken.

Thanks for your interest and your comments, Lizzie! Wikileaks is interesting... I'm curious to see what comes of it. The concept has merit...