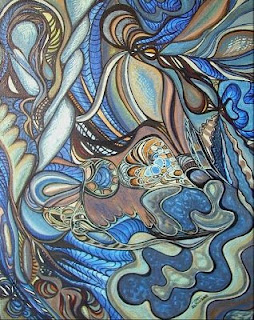 I happen to believe that everything that happens in life happens for a reason. This type of logic removes a lot of stress because it allows you to not focus on things that are outside of your control—Teresa Young
I met Teresa many years ago when I moved to Victoria, British Columbia to do my PhD and teach biology. She was this energetic, eccentric, wild-eyed student who worked in the lab that I was instructing. At the time, she was more of an artist than a scientist, and after she broke the last test tube in the lab, we gravitated toward each other like opposite charges and made fast friends.
After getting her degree, Teresa moved back east (that’s to the east coast in Canadian), got married and had a son. She couldn’t stay away, though, and has returned to work and play in beautiful British Columbia. Her surrealistic-abstract work has been described as fluid, bold and explosively introspective. A native of British Columbia, Canada, Teresa has been drawing and sketching pretty well all her life. She paid her way through college d 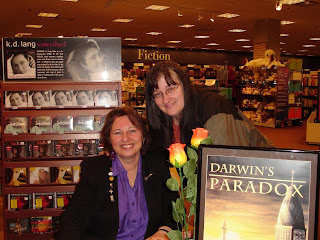 oing portraits in the tourist section of Victoria, BC. Now she helps design and implement relational database systems as senior implementation engineer with a web-based software company in Burnaby, BC.
She will be illustrating the PDF/Audio Book of Darwin’s Paradox, expected to be released this summer. I asked her if she’d like to see our beautiful planet Earth from Vinnie in orbit and she didn’t blink an eye to say yes, like I knew she would (she always knew I was an alien, though we never discussed it):
~~~~~ 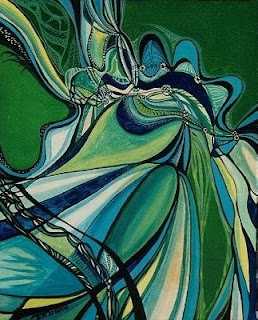 Like everyone before her, Teresa makes the ride via the crystal transporter without so much as a tummy rumble. I can’t say the same for me. Bathroom break later, I show her to the aft lounge where Harry, my irreverent droid, awaits with two Kokanee beers.
I settle into my chair and give my “old” green-eyed friend an appraising look: she’s matured. Gray flecks her thick mane; she’s let her hair grow long and flowing, like her art, and looks relaxed, awaiting my onslaught (she knows me).
SF Girl: I eagerly take the bait and send a barrage of questions at her like a machine gun: “How did you get started in art? How did it develop to what it currently is?”
Teresa: She takes an appreciative sip of her beer and beams an urchin smile at me. “When I was 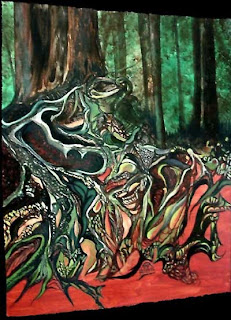 growing up, I was very interested in science fiction and fantasy books. This naturally also influenced my artwork in a big way, but the strange thing about this is, I drew largely in a realistic fashion in my youth. And I never pursued this artistic talent in a serious way as a career option. I think on some level, I had decided that doing it for a job would take the fun out of it. Also, doing portraits as a sideline for about fifteen years soured me quite young on selling my work. It's very rigid, only drawing what people want to see, especially when you are too young to realize that maybe what you want to see might be more valuable to you artistically. To this day, I shudder if someone asks me to draw them!”
SF Girl: I gasp and I’m about to ask another question when she blithely continues.
Teresa: “When I was fourteen, I started drawing in a surrealist style, but never showed this 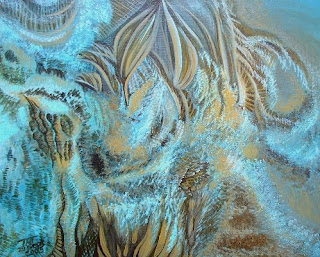 part of my artwork to too many people, perhaps thinking that it wasn't acceptable or something like that. So this part of my style developed separately from my "normal" artwork. I think it's like growing mushrooms in a back room or something.”
SF Girl: “You mean, like crack? What if—”
Teresa: She cuts me off, “Over time, the surreal and the abstract took over my art life. . . . Still in the shadows, developing in its own direction, it had a life of its own. When I am doing a piece, it is an expression of emotion, rather than a representation of a concrete reality. Life flows, emotions flow, and people grow. . . . So my artwork flows. I coined the term "emotional landscape" for some of my paintings; that is what they feel like to me.” She beams. 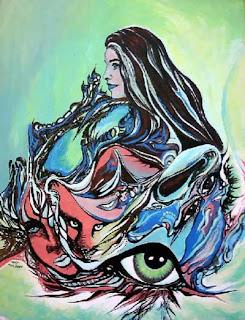 SF Girl: “But how does that—”
Teresa: She talks over me, “Lately, I have been wanting to seek an audience, so I have been getting some of my art out into the public eye. I was featured in December on an ezine called Latchkey.net. IAnd you can view a gallery of my work on Strange Horizons. I recently illustrated a story for a new magazine coming out in the next few months called !Ultra. Good thing the editor wasn't looking for strictly realistic pieces!”
SF Girl: I laugh. “But you also do—”
Teresa: She cuts in, “So if you would like to see more of my work, I have some pieces on a community website called webshots. It is quite nice, and they maintain it. (An added bonus for me!)”
She must have met my marketing manager, Karen Mason (SEO), I think, watching her pat a chortling Harry on the head and realizing that I haven’t gotten more than three words in edgewise and she’s marketed her work with the ease of a seasoned entrepreneur. Then, seeing that her beer is empty, Teresa leans forward and claps me hard on the back, then gets up to leave. I sigh…some things never change…
You can read Teresa's thoughts on art and philosophy on her blog, Surrealistic Reflections.
Posted by Nina Munteanu at 12:06 AM

A fine feature, Nina, with some good pictures.

Thanks, Jean-Luc. I'm proud and honoured to know this very talented and generous lady.

p.s. I have to chuckle... If you know me, it's no mean feat to keep me quiet in a conversation; Teresa and I seem to have made this tacit agreement early on in our relationship on an unspoken game we play during our lively discourse: who can go on the longest in monologue without the other being able to interupt. And, while I can claim many a victory, she is far more consumate at this game than I. God bless her! I'm learning... :)