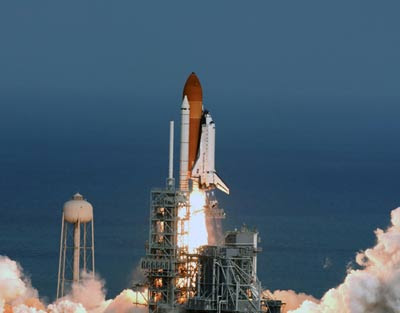 Yesterday, the space shuttle Atlantis and its crew of seven astronauts launched “on spectacular plumes of gold-tipped smoke … carrying Europe’s primary contribution to the International Space Station – the Columbus science laboratory” according to NASA. “The lab is filled with racks for experiments and research equipment and has fixtures on its exterior to also host research exposed to the vacuum of space,” continues NASA. “It represents the latest international addition to a facility already made of structures from the United States, Russia and Canada."


“It shows that there is a real partnership between communities,” NASA Administrator Mike Griffin said. According to NASA, the launch was crucial for the European Space Agency because the Columbus lab represents a cutting edge research facility for Europe and the continent’s first manned spacecraft. “Today we are opening a new chapter for ESA,” said Jean-Jacques Dordain, the European Space Agency director general. “Just as Columbus discovered the New World, with Columbus, we are discovering a whole new world.” 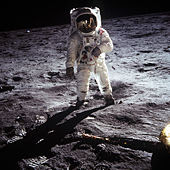 The event brought back stirring memories of NASA moments for me (e.g., the Mercury, Gemini, then Apollo series; man’s first walk on the moon, then the launch of the first space shuttle). So, today, in honor of yesterday’s launch, I dedicate this Friday Feature to the ambitious and highly valuable NASA program; a program that has steadfastly persisted and prevailed over funding cuts, political intrigue, commercial competition, scientific slashing and public apathy. 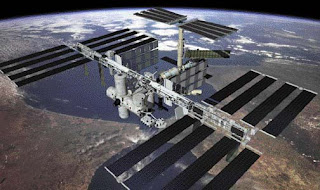 anet Earth. The station draws upon the scientific and technological resources of 16 nations: United States, Canada, Japan, Russia, 11 nations of the European Space Agency and Brazil.More than four times as large as the Russian Mir space station and a mass of about 1,040,000 pounds, the ISS measures 356 feet across and 290 feet long, with almost an acre of solar panels providing electrical power to six state-of-the-art laboratories. The station orbits at an altitude of 250 statute miles with an inclination of 51.6 degrees. This orbit provides accessibility by all the international partners.

Assembled in orbit, the ISS is an example of the first hands-on work in space, involving more spacewalks than ever before and a new generation of space robotics. About 850 clock hours of spacewalks were required by Russian and U.S. astronauts over five years to maintain and assemble the station (which is scheduled to be complete by 2010 according to the Vision for Space Exploration). The United States developed and currently operates the station. International partners contributed key elements to the ISS including Canada’s 55-foot long robotic arm for maintenance and assembly, Japan’s laboratory with attached exposed exterior platform, Russia’s research modules and spacecraft, and the European Space Agency’s pressurized laboratory. 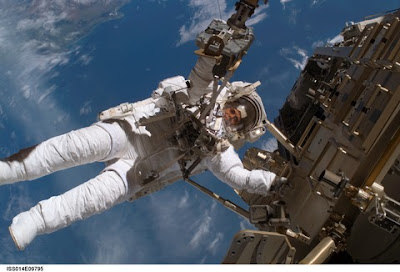 The station represents an unprecedented state-of-the-art laboratory complex in orbit, more than four times the size and with almost 60 times the electrical power for experiments — critical for research capability — of Russia's Mir. Research in the station's six laboratories have already lead to discoveries in medicine, materials and fundamental science that will benefit people all over the world. Through its research and technology, the station also serves as an indispensable step in preparation for future human space exploration. Research currently being performed aboard the station includes: investigations in protein crystals; tissue culture; life in low gravity; flames, fluids and metal in space; the nature of space; observations of Earth; and potential for commercialization.The first crew to live aboard the International Space Station, commanded by U.S. astronaut Bill Shepherd and including Russian cosmonauts Yuri Gidzenko as Soyuz Commander and Sergei Krikalev as Flight Engineer, was launched in early 2000 on a Russian Soyuz spacecraft.


On January 14, 2004, President Bush George W. Bush announced the Vision for Space Exploration, which represented the U.S. space policyUnited States space policy. It was seen as a response to the Space Shuttle Columbia disaster, the state of human spaceflight at NASA, and a way to regain public enthusiasm for space exploration.
The Vision calls for the space program to:
In a study by Zogby International of what Americans think of the NASA

space program, 44% of respondents thought that tax dollars spent on the program should remain the same, 32% thought it should be increased, 16% thought it should be decreased and 4% wanted it scrapped altogether.
I’ve heard many a person argue against the apparent profligate spending of the U.S. government on the NASA space program at the expense of housing, health, and education (funny, I don’t hear them complaining about the excessive amount spent on the military). Benefits of the program to humanity are doubtful at best, they complain. Who cares about space, the existence of planets in the Vega system or dark matter when we have so many problems to fix right here on Earth? This practical though myopic view has always been the bane of research, by posing the challenge to defend its value NOW. Research doesn’t work that way (hardly anything of value works that way); discoveries often occur serendipitously (e.g., Fleming’s discovery of penicillin); and often following many years of arduous and dedicated work. NASA’s research is no different. Its entire space program is based on unknowns and “what ifs”, on faith and on hope and ultimately on a vision of the future, a dream.
I have and always will support the NASA program… their dream. I too am a dreamer. Aren’t we all? Isn’t that our very nature? To dream?
NASA, better than any other organization, whether private or government-funded, represents humanity’s eternal dream to understand our universe and ultimately ourselves. We have always been and will continue to be explorers, whether it was Jacques Cartier who sailed across inclement seas up the Gulf of Saint Lawrence to discover a primitive Canada, Jacques Cousteau who dove the abysmal depths of a vast sea to coax out its dark secrets, or Captain Jacques Quasar who sailed the solar winds of the Milky Way Galaxy to find sentient alien life and ultimately answer the question of who and what we are. What program better represents our yearning for knowledge, understanding, and ultimately wisdom? The space program has always been about humanity’s search for meaning in an existentialist chaos of apparent vacuum. What is the nature of our existence? Why are we here? Our outward journey has always been ultimately about coming home.

An excellent feature, Nina, and a Quality Post. For too long, space travel has been in the doldrums since Apollo ended.

I agree, Jean-Luc. we should all be jazzed about what's going on.

Great post, Nina. As someone who suffers from severe fear of flying phobia, due to a near-fatal plane accident (midair fire) in a DC-3 in Alaska in 1983, and who NEVER flies anymore, NEVER, out of the sheer terror of the memory that got implanted in my brain and that I cannot shake (except with huge doses of valium, if need be) ... space travel is not only exciting to my grounded mind (if only as an armchair traveller) but also as a possible way to fugure generations to find refuge or new frontiers in space. Go go go.

By the way, did you know, I am sure you do, that Isaac Asimov, the great SF writer, suffered from a debilitating case of severe fear of flying, too, and never flew in airplanes? Yes. So I feel I am in good company, with my hard to understand neurosis. I trust airplanes, don't get me wrong; I just don't trust my memories of what I experienced that fateful day on June 23, 1983 -- high in the skies of northern Alaska on a beautiful sunny day. My entire life changed! Living on borrowed time now, and grateful for every every day that comes..... LIFE IS WONDERFUL! DESPITE THE ODD BUMPS AND BRUISES!

WOW, Danny! That's an experience you had... eek...midair fire... I didn't know about Isaac Asimov's fear of flying but did you know that Ray Bradbury suffered from the same phobia? He had to travel by train or drive everywhere...

HI Nina,
I stopped by to visit and see you are set to visit other worlds. Believe it or not I visited the European Space Agency, years ago when I lived in Holland. I was in the company of a certain young space scientist. This haiku poet does not have much of a head for science and although poets and physicists end up in the same realm, they get there via different means. Take care and hope all is well with you.

Oh, Princess! So true about poets and scientists ending up in the same place... Both pursue the same thing though in different ways: truth. I'll be posting on that in the next few posts, as a matter of fact. I'd love to hear your comments!

p.s. neat about your visit to the European Space Agency

Nina, I enjoyed your post immensely and have learned a lot!

Thanks, Jeane. I learned a lot writing it too. When I was a kid I wanted to be an astronaut. This is my vicarious way of being one... :)

Hey, Josh! Well done! Loved your answers and learned a lot too. 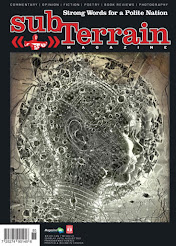