Your Gene or My Gene? 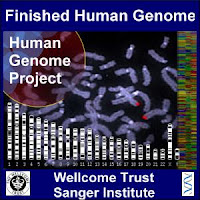 “We’re all pretty much the same except, of course, for the little things that make us different,” writes David Brown of the Washington Post, reporting on the conclusions of three Human Genome Project studies published last week.


All three studies support the notion that modern human beings left East Africa, walked into Central Asia and then dispersed east and west to populate the globe. The studies confirmed that Africans have more diverse genes than people of other continents. In fact, genetic diversity declines the farther one’s ancestor’s travelled from Africa. One study found that Americans of European descent carry more damaging gene variants than African Americans… No doubt “a byproduct of Caucasians’ arduous march eastward to the shores of the Atlantic,” suggests Brown.


Brown goes on to explain: “every individual carries tens of thousands of… [genetic] variations. Some don’t change the “words” that are the genes; some change a word but not its meaning; and some change the meaning in a way that can be beneficial or harmful. Each person’s collection of these changes (called ‘single nucleotide polymorphisms or SNPs) contributes to his or her individuality.”

Carlos Bustamante of Cornell University and his colleagues found that SNPs of European ancestors were more likely to result in unhealthy or unfavorable change then in other groups. Scientists theorize that the European ancestors suffered repeated population “bottlenecks”, with numbers crashing from epidemics, environmental catastrophes, and genocide. As a result, genetic diversity was lost and the deleterious single nucleotide polymorphisms (SNPs that increased risk of disease) were spread widely among the survivors and all descendants.
But here’s the neat part…About 90 per cent of the full catalogue of human diversity exists in every human population. Says Brown, “Individuals are likely to have almost as many differences with people we consider to be ‘like us’ as with strangers on the other side of the world.” Richard Myers, a geneticist at Stanford University School of Medicine suggests that “what this says is that we are all extremely related to one another.”


“There is no single gene, no single DNA marker that would distinguish one population from another,” Says Myers. “It is a pattern, like a bar code with thousands of lines on it.”

Like coffee, wine and love… our differences and similarities were written inside us to be explored and savored among individuals, like the rich full-bodied text of a compelling epic novel.

A quote from Oprah that I always kinda liked

Genes, DNA..they make up the very structure of life. Excellent.

LOL! Good one, Leigh. That Oprah...she's right. I do so love metaphor.... But sliding furtively from metaphor to homonym... How can you tell the difference between a male and female chromosome? You pull down the genes! HAR! ... okay, old joke...

This is what telegraph.co.uk said: "The difference between an obedient, friendly dog and a big bad wolf could be down to as few as 40 genes, according to a study into tameness."

Hi Nina,
This is a very interesting post and I like the idea we are all more similar than different.
Greetings from one variant to another. :)
Take care

Hi,
Another point of fact that is being researched into is the effect of living conditions of peoples grandparents. Apparently, those who came from families that shared one room, developed a different immune system to their peers from more wealthier backgrounds. Nowadays it has been claimed that this may be the cause of many modern allergies.

Thank you Princess! I always love it when you come and visit! You bring a kind of wonderful aura to the place.

Kloggers, I'd not heard of that research but it sounds compelling... and makes sense, though not necessarily in a Darwinian way...