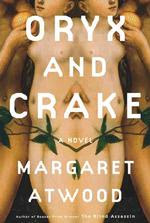 Margaret Atwood’s Booker Award nominee, “Oryx and Crake” is a sharp-edged, dark contemplative essay on the premise of where the myopia of greed, power and obsession with “self-image” and its outstripping of ethics and morality may take us. Replete with sordid subject matter and unlikeable but complex characters, Atwood’s gloomy post-apocalyptic tale follows the slow pace of introspection. It is a dark commentary rich with vivid, often viscerally provokative language, metaphor and symbolism.


“Oryx and Crake” is a dark “cautionary tale for a society addicted to vanity, greed and self.” Often sordid and disturbing, it depicts “an acquisitional era where everything from sex to learning is about power and ownership” (Sarah Barnett, Anglican Media). In her typical sharp-witted prose and edgy humor, Atwood “uses those rare birds, oryx and crake, like canaries in the mines,” says Victoria Bramworth of the Baltimore Sun, “to invoke a metaphor ― and warning ― for our times”.


The story begins with Jimmy, aka Snowman (as in Abominable), who lives a somnolent, disconsolate life in a post-apocalyptic world created by a worldwide biological catastrophe.
Slowly starving to death, Snowman’s mind leap frogs back and forth between his haunting memories of an abysmally amoral past to his present empty existence as the apparent sole survivor except for a group of naïve genetically-engineered youths. They are called the children of Crake, Crakers (after his best friend, who ― you guessed it ― created them) and they regard Snowman as their caretaker-prophet-demi-god. He spends a great deal of time wallowing in mourning for his beloved, Oryx, and best friend, Crake, as he searches for supplies in a wasteland where freakish genetically-engineered animals ravage the Pleeblands (where ordinary people used to live) and the Compounds (that used to shelter the extraordinary). His journey back to Crake’s high-tech facility, where the genesis of the Paradice Project was conceived, is Snowman’s journey “home” to his past, which unfolds insidiously like a twisted version of Adam and Eve: And the Lord God commanded. . . “You must not eat from the tree of the knowledge of good and evil, for when you eat of it you will surely die.”(Book of Genesis). And there was much of that. Dying. Decaying. Suffering. It plays out like a warped tragedy written by a toked-up Shakespeare, with Crake as the self-proclaimed god and snake in one, Oryx his ill-fated Eve, and Jimmy a callow and ineffectual Adam. Jimmy more aptly fulfills the role of the court jester, the Fool (there always is one in a Shakespeare play and he often fulfills the role of commentator).


Atwood fittingly paints Jimmy this way. He is basically an unappealing jerk (like most Fools); a debauched, morally dubious individual whose “life and circumstances,” according to critic Sarah Barnett, “beg our sympathy but many readers may be reluctant to give it.” Yet, by the last third of the novel, I found myself indeed sympathizing with him, despite his shortcomings, which began to wither next to the soulless actions of his best friend. It is at the same time that I also noticed I was no longer “observing” the book but “participating” in it. Somewhere around page 280 (the book runs 378 pages) I began to get involved. Up until then the story was mostly an exercise in literary cleverness, sharp dark wit, and smartly turned phrases ― my reaction being: “Ah, that was clever, Margaret! I see your point, Margaret!” Never, “Oh, my God, what’s going to happen next?” My patience was vindicated in the last third of the book, however, when this cornucopia of documentary-style detail ironically provided me with a wealth of material to draw and feel pathos for Snowman’s cascading plight toward the book’s inevitable and tragic climax. Atwood cooly subverts the reader into accepting and viscerally experiencing her “mundane” world. So, why did Jimmy incite my compassion? Perhaps it was the mother in me hoping he’d find his way, his connection with his soul and the heart of humanity. Even the mother who abandoned him (to pursue her principals) makes a last feeble effort to instill this in him in her final message to him: “I love you. Don’t let me down, Jimmy.”


Atwood’s astute command of the grim subject matter explored in “Oryx and Crake” provides an edgy realism that is not found in much traditional science fiction. I think this is largely due to Atwood’s mainstream literature background and to her virtuoso writing style (yes, including all that detail!). This is why it works, despite not being terribly original within a purely SF context. What Atwood brings to us that is more important than originality is her gritty realism and a tone of visceral immediacy. Oryx and Crake is a poignant commentary of our disfunctional society of isolated, fearful people who have lost touch with what it is to be human. She has accurately captured a growing zeitgeist that has lost the need for words like honor, integrity, compassion, humility, forgiveness, respect and love in its vocabulary. And she has projected this trend into an alarmingly probable future. This is subversive SF at its best.


Atwood’s “Oryx & Crake” is a swift left hook in the gut from the darkness; for those willing to spend time reflecting on the dark poetry of Atwood’s smart and edgy slice-of-life commentary, there is much to gain in reading “Oryx and Crake”.

A super review, Nina. You analysed it all really well.

I read that book in school! It was a good book, but I didn't really like the ending.

And, speaking of "Canadian"... That's cool that you read this book in school, Kai. I'd be curious what kind of discussion you had in your English class on it. As for the ending... well... it IS very Canadian (Margaret Atwood is Canadian)... There's a blog post on that, I realize... maybe you can help me write it?

hat a great review, you really conveyed the essence of the book. Unfortunately for me I just can't seem to enjoy any of her books. My ex read them all the time and I have tried and tried to engage with her style of writing, but it just doesn't work for me. I feel like I'm missing out on a treat, but for me I feel nothing but frustration with her style.

Yes, her style isn't for everyone. I did find it rather ponderous at times. But the subject matter was sufficiently compelling for me to plow through. Did you ever try reading the Handmaid's Tale? It is more "speculative" in tone.