What Color is Your Alien? 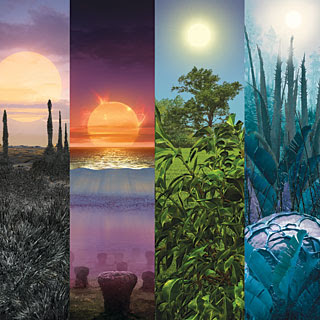 Apparently the vegetable kingdom in Mars, instead of having green for a dominant colour, is of a vivid blood-red tint—H.G. Wells
According to Nancy Y. Kiang (biometeorologist at the NASA Goddard Institute for Space Studies) green aliens are so passé. Well, she may have a point. In a fascinating article in Scientific American (April, 2008), Kiang tells us that “light of any color from deep violet through the near-infrared could power photosynthesis.” For instance, the cooler type M stars (red dwarfs) are feeble and planets receive less visible light. Plants might need to be close to black in color to absorb as much light as possible. Young M stars fry planetary surfaces with ultra-violet flares, so many organisms would likely be aquatic to survive. Our sun is type G, and on Earth green generally dominates the color of living plants. Around F-stars, hotter and bluer than our sun, plants might get too much light and would need to reflect much of it, so they would tend to absorb blue light and might look green to yellow to red or violet.

Photosynthesis, says Kiang, adapts to the spectrum of light that reaches an organism; and the spectrum results from the parent star’s radiation spectrum, combined with the filtering effects of the planet’s atmosphere. Kiang further adds that photosynthesis can produce very conspicuous biosignatures (see more below): 1) biologically generated atmospheric gases such as oxygen and its product, ozone; and 2) surface colors that indicate the presence of specialized pigments such as green chlorophyll.

When I first learned about photosynthesis in Grade 3, I thought it was a magical process. Scientists who make it their specialty still do. It is truly one of God’s wonderful gifts to life in this universe. Well, think about it: photosynthesis converts light energy (sunlight) into chemical energy through living organisms. The raw materials include carbon dioxide and water and the end-products include oxygen and (energy rich) carbohydrates, like sucrose, glucose and starch. The process is arguably the most important biochemical pathway on Earth since nearly all life either directly or indirectly depends on it. And like all marvelous things in nature, the pigments that harvest sunlight don’t operate in isolation. They operate “like an array of antennas, each tuned to pick out photons of particular wavelengths,” says Kiang. Chlorophyll preferentially absorbs red and blue light. Carotenoid pigments, responsible for the vibrant reds and yellows of autumn, pick up a slightly different shade of blue. All this energy is funneled to a special “hub” chlorophyll molecule, which splits water and releases oxygen.

How plausible is it for photosynthesis to arise on another planet? The process is so successful on Earth that it remains the foundation for most life (exceptions being organisms that live off methane of oceanic hydrothermal vents, etc.). The majority of life on earth depends on sunlight. Photosynthesis evolved early on in Earth’s history, with the first fossil evidence dating to about 3.4 billion years ago. “The rapidity of its emergence suggests it was no fluke and could arise on other worlds too,” Kiang contends and adds, “As organisms released gases, they changed the very lighting conditions on which they depended,” which meant that hey had to evolve new colors. We can see this in the evolutionary range in pigmentation of simple unicellular life, from the near-infrared absorbing first photosynthetic bacteria to the early blue-green algae, red and brown algae and finally the more evolved green algae. "Studying Earth life to guide our search for life on other worlds is the essence of astrobiology," said Carl Pilcher, director of the NAI at NASA Ames. "This work broadens our understanding of how life may be detected on Earth-like planets around other stars, while simultaneously improving our understanding of life on Earth."

Predicting alien plant colors takes experts ranging from astronomers to plant physiologists to biochemists. While the longest wavelength observed in photosynthesis on Earth is about 1,015 nm (in purple anoxygenic bacteria), the laws of physics set no strict upper limit. The limiting factor, according to Kiang, isn’t the feasibility of novel pigments but the light spectrum available at a planet’s surface, which depends mostly on the star type. Astronomers describe what’s called a “habitable zone” around each star. This is a range of orbits where planets can maintain a temperature that supports liquid water. In the solar system of our G star, this includes the orbits of Earth and Mars. The habitable zone of an F star, a hotter star, would be farther out and that of a K and M star, would be closer.

Aside from colors reflected by plants, the following features may provide signs of life (e.g., biosignatures) according to NASA:

According to Kiang, astronomers are considering four scenarios for life on other planets depending on the age and type of star. These include:

Finding life on other planets is a fast approaching reality—if it hasn’t already happened by the time I’ve written this. Understanding photosynthesis is one of the keys to designing and interpreting NASA’s exobiology missions. Says Kiang, “our ability to search for life elsewhere in the universe ultimately requires our deepest understanding of life here on Earth.”

Given that alien vegetation may have a dominant color other than green, I wonder how that might affect the range of colors in flowers and fruits, especially considering the varying amounts of light from the different types of stars.

And, how would the high-light plants react? How would they attract pollinators in a world full of bright light? Perhaps they would produce stronger odors or use other forms of attractants that would appeal to senses other than vision.

It would also be interesting to see how wildlife would be colored on these different worlds. On Earth, reds and yellows are frequently warning colors, warning you that something is poisonous (or mimicking something that is). What color would the warnings be on these other worlds?

Fascinating stuff, and stuff which isn't frequently explored in science fiction. At least, not in film or television.

Excellent points, dcr. I don't think these considerations are explored as much in science fiction as we might think because they require time to explore (for the reader) and may not be perceived as interesting as other, more technological stuff, by readership. I personally find it all fascinating and tend to include it in my world building (see Collision with Paradise or my upcoming book, Splintered Universe, both on other worlds). But, then again, I'm an ecologist...

As a chemist, I was certainly aware that a colour other than green would be required for optimal photosynthesis under different wavelengths of light. But, even the leaves of plants plants on earth, you might think, would benefit from being black so they could trap all available photo energy. However, there are the harmful effects of absorbing energy of too high a frequency to consider here, so green has become the generic optimum we see and beautiful it is too. Looking at my garden which is currently bloom-free (we've a dog) I could probably count at least 1000 different shades of green, each one tailored by evolution (and selective breeding) to optimally trap sunlight in the specific strain or species.

Thanks, David. Aside from the various shades of green there are also the various shapes and textures which nature has given her foliage to cope with lack of or too much moisture, or dealing with predators, etc. It's a wonderful world out there! And then there's the whole gamut of reproductive strategies as dcr mentioned, which may involve more than flower, but also sepals, stalks, leaves, etc.