Waves, Spirals and the Face of God 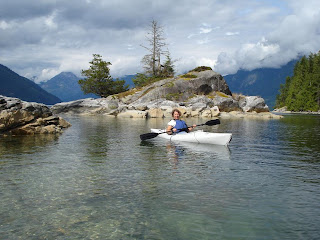 I wasn’t home a week from my American book tour when the family motored north to do some boating along the British Columbia coast to our usual haunts: Cortes Island and Desolation Sound. Named so by Captain George Vancouver in 1792 due to some bad luck, poor weather and its remoteness, Desolation Sound is far from desolate. During the summer, it 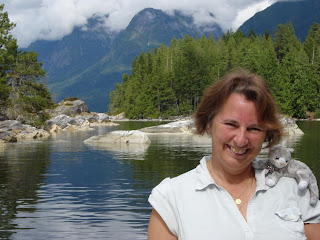 offers one of the best cruising grounds in the world, drawing boaters from all over the planet to its clear and warm waters, exceptional scenery and a kayaker’s paradise at the northern tip of the Sunshine Coast of British Columbia.

Despite years of practice with my husband and his family, I’m not a very good boater. As much as dark clouds and thunderstorms draw me on land, they send me cowering in the hold on water. Waves and I just don’t get along. You guessed it: we had wind and we had waves. I’ve said before that I usually don’t dream. Well, I dreamt that night.
I dreamt that two large vortexes opened up beside our boat and it broke free of its 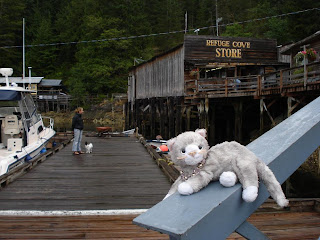 mooring and pitched toward one yawning spiral. In a surging move, I grabbed at a piling nearby to keep us from dropping down into the dark waterhole. Great start to a holiday, I thought.

The next day, more for my benefit than to get supplies, we stopped in at Refuge Cove—my husband seems to know when I need a coffee. Refuge Cove is a charming boardwalk community nestled in the craggy granite shoreline of West Redonda Island. Run as a co-op, it offers the visiting boater a general store, café, laundry, showers and free wireless internet. I noticed no cell phone coverage, though (yes, I’m spoiled). The café, up the boardwalk steps to the right of the general store, seduced 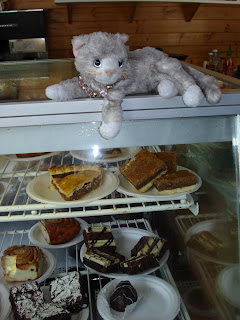 us with exotic coffee and “fantastic chile dogs” plus an assortment of pastries. Toulouse had his eye on an exquisite-looking chocolate-covered pastry. My son wondered what it was and I responded, “It has to be French. Anything rich and mysterious is French.” He nodded, as though my proclamation was a truism for all things French, and we chose a zebra cake instead. It was rich too.

We cruised on to one of our favorite haunts, Prideaux Haven, protected waters behind a cluster of islands in Humphrey Channel and a haven for kayaking, diving, swimming and sight-seeing. Eager to tour the scenic area with my kayak, my husband and I paddled off in search of Nature’s beauty. While hugging the shoreline of one island, we spotted an intense windfall on shore that had recently occurred. We pictured the focused devastation, likely caused by a cyclone, which might have easily stirred up a waterspout. I swallowed and thought of my dream. The next day, as I was boat- 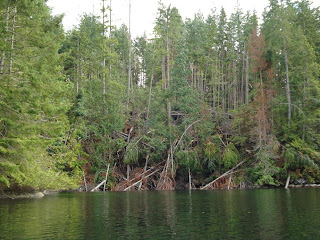 tendering for my son and his friend who were diving along one of the rocky islands, I noticed the two spirals that formed as I drew my paddle across the water. I had to do a double take (hmmm, bad pun, I guess…). What was nature trying to tell me?

I don’t consider myself superstitious, but when my psyche persists in bringing up a symbol, I pay attention to it. Carl Jung, the founder of Depth Psychology, proposed that symbols appear to us when there is a need to express what thought cannot think or what is only divined or felt. Jung discovered reoccurring symbols among differing peoples and cultures, unaffected by time and space. He called these shared symbols archetypes which are irrepressible, unconscious, pre-existing forms of the inherited structure of the psyche and manifested themselves spontaneously anywhere, anytime. Joseph Campbell, scholar and mythologist, called these synchronous symbols mythic images that lay at the depth of the unconscious where humans are no longer distinct individuals, where our minds widen and merge into the mind of humankind. Where we are all the same.

The symbol of the spiral, and the double spiral particularly, comes from ancient times. Reflecting the yin-yang symbol, the double spiral “symbolizes the polarity and balance of the two reverse streams of a unique cosmic force” according to several studiers of metaphysics.

The double spiral is essentially a sign of balance, life, regeneration and the equinoxes—seasons of “change”. Like the equinoxes, it reflects the co-existence of death and life. The death of a cycle is the prior condition for the birth of a new one. Examples include the Hindu double helix of the Brahman’s staff or the “destructive” and “regenerative” power of the vajra; the double operation of “coagulation” and “dissolvation” of the Hermetic tradition; or the alternate rhythm of “condensation” and “dissipation” of Taoism. An individual’s breathing (expiration-inspiration) or heartbeat opposites (diastole-systole) correspond to the cosmic phenomena of “development-envelopment” and “evolution-involution”. As a symbol of lightning, the Hindu vajra represents the “world axis” when held vertically and when tilted on one side or other it depicts the Goddess and union of beings. Poseidon’s trident and Thor’s hammer of Nordic mythology possess a similar role. The double spiral is also seen in Lorenz’s Butterfly Effect of Choas Theory.

In an earlier post, I discussed the alternating rhythm of creative destruction in an ecological paradigm that takes place in Nature. Ecologists call this succession.

The spiral is one of the oldest symbols of human spirituality. It was found scratched into rocks from thousands of years ago, on every continent in the world. In current times, the spiral is an emblem of “the Goddess”. The ancient Celts used the spiral as a symbol for reaching the soul and God. An example is their famous spiraling knotwork, derived from their concept of a Great Cosmic Loom; the Hopi Native Americans use circular and square labyrinths as symbols of Mother Earth and the emergence from her womb upon creation and spiritual awakening.

Examples of spirals in nature abound. Just look around you. The spiral growth patterns of daisies and sunflowers; celestial galaxies, cylindrical spirals in sea shells are just a few examples. Examples in the human body include: the cochlea, brain, fingertips, entire nervous system, DNA, etc. 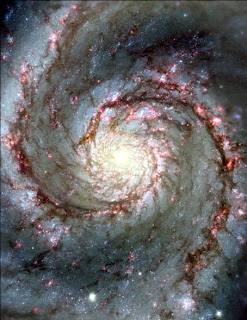 nd by contemplating his existence we become one with the transcendent, ultimate reality. Like Jung, he believed that if you find the inward thing which you are then you have discovered the “truth”. The spiral is thought by some to be the universal symbol of God and the Self. According to Jung, spirals symbolize our soul, our essence; remaining the same while experience deepens and elevates our egos.

So, what did I really dream and see in Desolation Sound that tugged so relentlessly at my psyche?

Paula Vaughan of One Woman’s Mind suggests that “if we heroically choose to become aware of the spiraling spiritual and psychological awakening taking place in our lives at all times, then we will find ourselves face to face with Divinity.”

What a beautiful realm that you travelled through, Nina. Such an interesting feature.

Yes, it is a beautiful marine park, isn't it? And with such an ironic name (Desolation Sound). My experiences there are never boring!

now that is a post! ;) very beautiful. I love BC, but have you ever been to the Canadian Shield/Lake of the Woods? no mountains but very hilly/rocky with vast webworks of lake and river. its nice.

Thanks, Sean! Yes, I've been there too... Beautiful, indeed! The planet Earth has so much in the way of beauty, from our flat barren plains to the rugged mountains and marine coasts. This is why I love to travel.

Extremely well synthesized and said, Erik! Thanks for the wise comment. I've missed hearing from you. Welcome back! :)

Hi Nina, i stumbled this! "Very inspiring and surprising combination of family holiday report and spiritual insight." Thank you.

Thanks, Heidrun! It was indeed a trip that "opened my eyes". I had several epiphanies there. God's country, you know... :) Thanks for the stumble!