There are more things in heaven and earth, Horatio, than are dreamt of in your philosophy—William Shakespeare (Hamlet, Act 1, scene 5)
Physicists like to say that all you have to do is say, these are the conditions, now what happens next?—Richard P. Feyman

When the Greek poet Hesiod wrote Theogony in the 8th Century, he stated that “first of all Chaos came to be,” and then the Earth and everything stable followed. The ancient Greeks seemed to have accepted that chaos precedes order; that order comes from disorder—the opposite of what current science postulates. The dragon in Chinese myth represents the principal of order, yang, which emerges from chaos. Yin and yang, the female and male principals, create the universe and retain the qualities of chaos; too much of either brings back chaos.

Chaos theory emerged in the 20th Century as a new and exciting field of scientific inquiry during a flagging discipline suffering the crisis of increasing specialization. Chaos breaks the lines that separate scientific discipline, bringing to the world a science of the global nature of systems. Here’s how James Gleick (“Chaos”, 1987) describes it:


Where chaos begins, classical science stops. For as long as the world has had physicists inquiring into the laws of nature, it has suffered a special ignorance about disorder in the atmosphere, in the turbulent sea, in the fluctuations of wildlife populations, in the oscillations of the heart and the brain. The irregular side of nature, the discontinuous and erratic side—these have been puzzles to science, or worse, monstrosities.

Then, in the 1970s, mathematicians, physicists, biologists, and chemists began to seek connections between different kinds of irregularity. Says Gleick:

Physiologists found a surprising order in the chaos that develops in the human heart, the prime cause of sudden unexplained death. Ecologists explored the rise and fall of gypsy moth populations. Economists dug out old stock price data and tried a new kind of analysis. The insights that emerged led directly into the natural world—the shapes of clouds, the paths of lightening, the microscopic intertwining of blood vessels, the galactic clustering of stars.


Chaos theory presents “a universe that is at once deterministic and obeys the fundamental physical laws, but is capable of disorder, complexity and unpredictability,” say Sardar and Abrams in their excellent (and very entertaining) book, “Introducing Chaos” by Totem Books. Chaos describes aperiodic, apparently random events in a deterministic system. In chaos there is order and in order there is chaos. And “now that science is looking,” says Gleick, “chaos seems everywhere. A rising column of cigarette smoke breaks into wild swirls. A flag snaps back and forth in the wind. A dripping faucet goes from a steady pattern to a random one.”


We can witness chaos in the random changes in weather, the spread of epidemics, the metabolism of the cells, the changing populations of insects and birds, the rise and fall of civilizations, and the propagation of impulses along our nerves. Gleick notes that “the most passionate advocates of the new science go so far as to say that twentieth-century science will be remembered for just three things: relativity, quantum mechanics and chaos.”


Chaos is perhaps best defined by the very terms scientists have had to invent to describe it; for instance:


Chaos is nonlinear: relationships involve powers other than one; variables cannot be simply and directly related. tself and shows the effects of any small perturbation that makes prediction impossible and a series of measurements appear random. History is aperiodic. Despite showing broad patterns in the rise and fall of civilizations, events never actually repeat. Some seemingly small unimportant events have also led to long-lasting changes; the Butterfly Effect. One of the signatures of chaos and coined by Edward Lorenz, the Butterfly Effect describes the sensitive dependence of chaotic systems on initial conditions—infinitesimally small changes at the start lead to bigger changes later. In Ray Bradbury’s short story, “A Sound of Thunder”, the death of a pre-historic butterfly changes the outcome of a present-day presidential election.


Chaos is made up of fractals: coined by Benoit Mandelbrot, fractals expose the abstract geometrical nature of chaos. A fractal object looks the same when examined from far away or nearby—it is self-similar. Trees, mountains and clouds are examples of fractals. So are turbulence, blood vessels, earthquakes.


Chaos is self-organized: Here’s an example—the Great Red Spot of Jupiter is a vast, swirling oval “storm” that never moves and never runs down. John Updike describes “the red spot roaring like an anguished eye/amid a turbulence 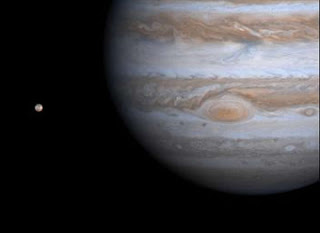 of boiling eyebrows.” A stable storm. A paradox. And a case of the more you know the less you know. But, what is it? With each new fact learned, the last century has produced a march of theories in rapid succession (the lava flow theory; the new moon theory, the egg theory, the column-of-gas theory). Yet none provided a definitive or convincing answer. Wherever there is paradox, look for chaos theory to explain it. Scientist and Chaoticist, Philip Marcus, determined that the spot is a self-organizing system, created and regulated by the same nonlinear twists that create the unpredictable turmoil around it. It is stable chaos. Unlike most physicists, Marcus had learned from Lorenz that a deterministic system can produce much more than just periodic behaviour. He looked for wild disorder, knowing that islands of structure could appear within the disorder.
These new sciences have been intuitively understood by indigenous and non-Western societies for centuries; for instance, natives in India have used fractals as an art form; symmetrical fractals adorning the ceilings of most medieval mosques; the use of fractal patterns in Islamic art and design to focus the intellect on the contemplation of the Infinite. Traditional non-Western agricultural techniques also reflect chaos, from the use of underground aquifers in the Middle East to pest control with birds in Sri Lanka. They seem to have long grasped the fact that “no rain, no trees” also translates to “no trees, no rain.” The mysticism of Buddhism and Sufism has long used the self-looping contradictory statements to take the minds of students to the edge of chaos and then to enlightenment through self-organization.


In the 1980s scientists began to describe the ability of complex systems to balance order and chaos—called the edge of chaos. This is where a system is in a kind us suspended state between stability and total dissolution into turbulence. They called it complexity. Some European scientists even coined a new term, “chaotics”, to describe the integration of studying chaos and complexity. Here’s the cool part:


Complex systems:
Can spontaneously self-organize. Think of a flock of birds, adjusting and adapting to their neighbours and unconsciously organizing themselves into a patterned flock. Atoms form chemical bonds with each other and organize themselves into complex molecules.
Adapt and relate. They’re not passive; they respond and transform whatever happens to their advantage. Species adapt to changes in their environment; markets respond to changing circumstances; the human brain organizes and reorganizes its millions of neural connections as it learns from experiences.


Are interconnected. Like trees with climates, people with the environment, societies with each other.


Which brings us back to Hesiod. Maybe he really knew what he was talking about, after all.


David Ruelle, professor of Theoretical Physics at the Institut des Hautes Etudes Scientifiques, Bures-sur-Yvette, France. He coined the term “strange attractor” in a paper he co-wrote with Floris Takens “On the Nature of Turbulence” (1971) in which he proposed that fluid turbulence is an example of chaos.

Edward Lorenz, meteorologist at the Massachusetts Institute of Technology, was the first to record a known instance of chaotic behaviour. Responsible for the term “Butterfly Effect”, in 1972, he presented a paper in 1972 at a conference in Washington, entitled, “Does the Flap of a Butterfly’s Wings in Brazil Set Off a Tornado in Texas?”

Benoit Mandelbrot, a mathematical physicist for IBM, coined the term “fractal” and developed the field of fractal geometry, which played a key role in the emergence of chaos theory. Mandelbrot suggested that what we observe depends on where we are positioned and how we measure it. In a well known paper, he asked, “How Long is the Coast of Britain?” and suggested that scale had everything to do with the answer. A fractal is a way of seeing infinity.

Robert May, a mathematical biologist at Princeton University and Oxford University, in his studies of predator-prey populations found that nonlinear feedback forces in the environment produced pseudo-random changes. He confirmed that biological systems are governed by nonlinear mechanisms and portrayed them in plots he called “bifurcations”.


Mitchell Feigenbaum, a graduate student at Massachusetts Institute of Technology, was the first to prove that chaos is not a quirk of mathematics but a universal property of nonlinear feedback systems, coining the notion of “universality”. He provided the first significant theoretical evidence that chaos exists in real world situations.

Ilya Prigogine, a Belgian chemist, introduced the notions of dissipative systems and “self-organization”, showing that conditions created structures far from equilibrium. He contended that most of reality is not stable, but full of disorder and change.

Thenks, Kaz. Speaking of fractals...your site is incredible. For others, here is Kaz's site: http://rorschachfractal.blogspot.com/ Go check out the incredible fractal images on there.

That's always been good enough for me.

Good overview. My work revolves around finding what the social implications are for this. Happily, there are a growing number of other people involved but it isn't a tide or anything. It does, however, remain an important context for designing and reforming institutions from government to private business. You can see some of my ideas at: www.ingenuityarts.com

Milton said:
> My work revolves around finding what the social implications are for this.

Oh. I wish I could find time to write this much about equally interesting things, and with all the references in place... You probably really are an alien, or at least you have a superpower I haven't yet developed. I'll have to irradiate some spiders the next time I have a radioactive source at my disposal!

Good luck with the spiders, Aka!

And, Erik...maybe NOTHING is really determinant (we just made it all up to feel better about line ups at the Bank...

Milton, you'll also enjoy my post in a while on autopoiesis...Practicing chaos theory in a corporation is fascinating stuff and is an emerging and thriving philosophy of doing business... :)

Jean-Luc...I never saw that movie. Was it good?

Yes, Nina..it was super. This student found he could travel back in time by reading his diary, but everytime he did, things got worse in the present day.

THanks for telling me, Millar! WOW! So Blogrush DOES work!... :)

Cool, Scotty! I will definitely look it up. The title is very compelling, indeed! Thanks.

What an excellent summary of Chaos Theory! It was Gleick's 'Chaos' that first turned me on to the beauty of fractals. That must have been about 10 years ago: I remain in their thrall!

Most excellent. Other referents might include Godel & his incompleteness theorem, Dirac's unitary hypothesis, and "The Librarian"'s "the name of God is me."

These are neat, Bezdomny... I've heard of Godel's work...and like that title. I'm immediately skeptical of any unifying theory or hypothesis...as for "the Name of God is Me" sounds deliciously fascinating. Will have to look that up. Thanks, Bezdomny!

WOW! Even the spam is following chaos theory! Cool...

This was an incredible synthesis :D! I was wondering how does chaos relate to your field of work? Do you have any studies posted anywhere?

Chaos theory,complexity, synchronicity, autopoiesis and fractals all relate to my studies in aquatic ecology. I published a scientific paper on "creative destruction" in aquatic systems, based on Buzz Holling's work. I blog about it here:
http://sfgirl-thealiennextdoor.blogspot.com/2008/03/creative-destructionyet-another-paradox.html
and here:
http://sfgirl-thealiennextdoor.blogspot.com/2008/03/creative-destructionyet-another-paradox.html