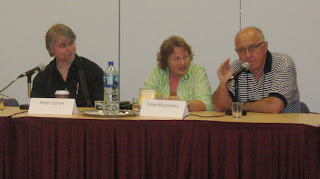 “We want to see a hero who works to achieve an environmentally sustainable world through innovation and creative technology,” said Tom Doherty, publisher of Tor Books, beside me at a panel on alternate energy. I was delighted to hear that Tor was officially embracing a new kind of hero along with a new paradigm for storytelling. One based on intelligent innovation, creativity and cooperation. 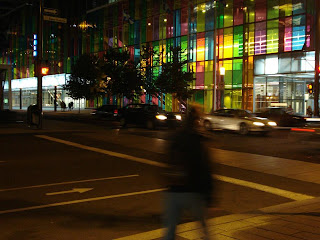 So, what was I doing sitting next to Tom Doherty at a panel on alternate energy? Truth be told, it was Toulouse’s fault.

Several weeks ago, Toulouse enticed me to embark on a book/convention tour that would last a month. The starting point was Montreal, Quebec (my old digs when I went to university). We went there to participate in the 2009 World Science Fiction Convention. These guys put me in a pile of cool panels on top of doing readings and signings for my latest books, Darwin’s Paradox and The Fiction Writer (Darwin’s prequel, 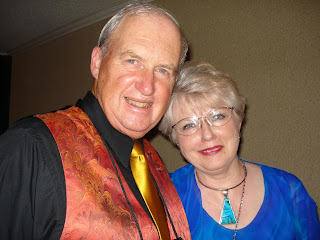 Angel of Chaos, is still in pre-production, so I didn’t even have a cover for it yet to show). I participated in science/ecology, writing and SF panels with rock stars like Tom Doherty, Julie Czerneda, and new faces like Bruce Rockwood, David B. Coe, Peter Cohen, John Kessel, Jason Tuell, Kristin Norwood, Bob Sojka, Mike Gallaher, Michael Sestak and many others. 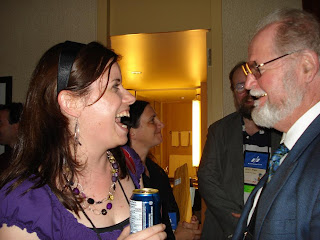 On the alternate energy panel, besides Tom and I there were science experts Bruce Lindsay Rockwood, Peter Cohen, and Charles Stross. The panel was hot with intelligent and lively discussion as we pursued topics that included solar and wind power, nuclear power and alternatives to hydro-electric power. Tom brought up Craig Venter and Shell Oil’s current venture with genetically modified algae to produce diesel oil, which fueled further debate on future ethical questions. 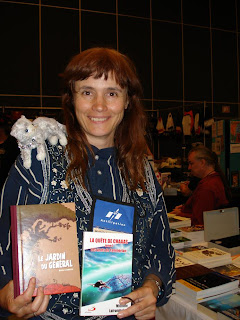 The other panels were also lively, contentious in some cases, erudite and fun. What struck me about the science panels at this particular convention over previous cons I’ve participated in was the level of commitment and knowledge shown by both panelists and those who attended.
I measure the success of a con through its surprises as well as by how many old friends I visit with and new friends I make. This one was a resounding success because I met so many weird—eh—wonderful people and encountered many thrilling surprises. The list is too long to give here but I’ll include some unexpected highlights.

What illustrious company you had there, Nina. I'm sure they said the same when seeing you!

Was a good one. Sorry I missed the alternate energy panel.

Karl... you should have been ON that panel!

Thanks, Heather! It was rich.

I had a great time too! During costume night, someone asked me what character I was playing? LOL!