Nina and Toulouse Go To Georgia (as told by Toulouse) 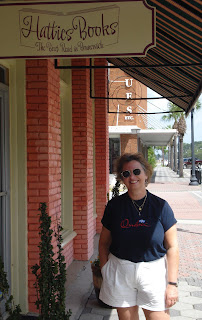 Nina’s too busy (writing 90 articles for her publisher) to post so she asked me if I could post for her. I said, “ok, dude. I can write as good as the rest of them!” On an aside, I should tell you that I’ve been Nina’s ghost writer for years, (since I was rescued from a truck stop in Michigan, that is…) and that her publisher corrects Nina's spelling all the time… In fact, everyone corrects her spelling all the time. But enough about her. This post is about ME…

Oh, and about my neat adventure in Georgia…


Stoked by some cool times at the World Science Fiction Convention in Montreal, Nina and I 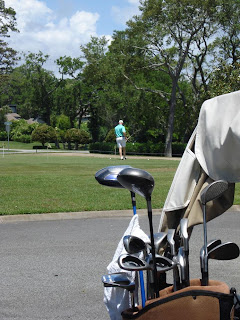 hopped on a plane at Trudeau International Airport and flew to sunny Georgia because we felt like it. Well, we actually stopped in Jacksonville and drove to St. Simon’s Island on the southern Georgian coast. The drive was boring for me (Nina forgot me in her briefcase!) We drove to Sea Palms Resort, a golfer’s mecca on St. Simon’s Island, to deliver a lecture on “A Hero’s Journey” at a local con there, Scribblers Writers’ Retreat. While Nina slaved on her lecture and handouts, I slipped out of the confining briefcase and wandered the grounds. I remember thinking that they could use the touch of David McLay Kidd, the golf course minimalist that Nina—er I wrote about in a previous post.

My adventure took a hairpin turn for the better when I came underfoot of Mildred Wilcox, a beautiful and elegant southern lady, local art expert and art gallery owner of The Left Bank Art Gallery. Being a lady of impeccable taste, she 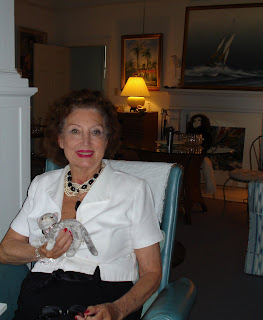 picked me up and invited me to her house on St. Simon’s where she offered me orange julep and we traded stories about French Impressionism, Paris in the springtime, Georgian marshes, live Oaks and why there are no cats on St. Simon’s Island… She was teasing me, I’m sure!

While Nina did a reading and signings at Hattie’s Books, a quaint independent bookstore in Brunswick, GA that carries both Darwin’s Paradox and The Fiction Writer, I hid in her briefcase. Marcia Stutz, the bookstore owner lets the store’s feisty terrier mascot, Mister Wiggles, run around freely without a leash! Imagine that! I didn’t like him. Even though everyone else did.

The next day, Nina donned her "Nina the writers coach" hat and did at least a dozen one-on-one consultations in the lobby of the hotel. The sessions were filmed by Rizzuti Productions and Starfire World Syndicate. Nina reminded me of Ellen DeGeneres; she was having way too much fun in front of the camera! I was amazed; she did the whole thing without a single break, even though she must have had a dozen coffees. I bet you’ll see a blooper reel on 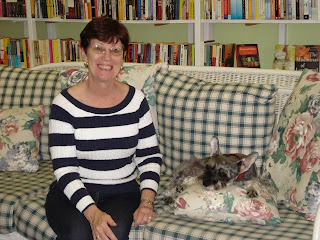 YouTube shortly. I saw a few choice bloopers! That’s what happens when you don’t take any breaks, Nina! But a few victim—er clients walked away from her advice with genuine smiles on their faces, not just dazed grins of confused euphoria… “What did she say?” I heard them whispering to each other in the hallway by the espresso machine where Nina would have preferred to be. “Did she really want me to spell ‘the’ for her?...”

Talking about bloopers… Despite fully embracing new tools, Nina isn’t particularly adept technologically. So, when she decided to give a fancy Power Point lecture using interactive 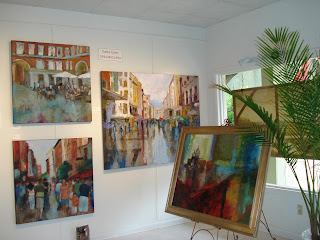 interface and a Wacom Bamboo Tablet, I sniggered and asked her why she didn’t just use a whiteboard and colored felts like she always did. She insisted (rather petulantly, I might add) and what could go wrong did—computer and projector refused to talk, the tablet had a hissy fit with lines scrambling everywhere and the screen decided to cave into a black hole. So, after much hand waving (which never works; she isn’t a Jedi yet…) Nina resorted to her twenty-year teaching experience using a whiteboard and colored felts. Of course, the lecture went well and the audience appreciated her instruction, if not her bad jokes. But I took the opportunity to say “I told you so,” anyway. One must take them as they come. Where I’m from in southern France—No, I wasn’t born in Michigan! I was just rescued from there—there is a saying: quel sera, sera…
I may be posting for her again… I don’t think she’ll get those 90 articles done as quickly as she thought.

Great post, Toulouse. nina certainly has a busy time putting on all the hats she wears. There's more to do than just writing a book.

Always love to hear about Toulouse and Nina's Excellent Adventures! Georgia once again comes alive for us! Can't wait to see pictures and hear stories from Nova Scotia!

Thanks, Jean-Luc... Yes, a writer must wear many hats these days. It isn't enough to write a book. It must sell too! LOL!

Yes, we just love Georgia! I had to take a break to help my son move to his university (you'll see my post) then I will "disappear" once again... :)

She did finally write them too! Amazing... Well, I did help edit and with spelling, of course... :-3
Toulouse