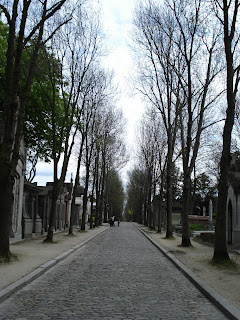 If you are lucky enough to have lived in Paris as a young man, then wherever you go for the rest of your life it stays with you, for Paris is a moveable feast
—Ernest Hemingway

It’s been a week since I left Paris and came home. My heart aches like a lost lover. You could call it jet lag, but I prefer to believe that I’ve fallen head-over-heels in love: dazed with haunting visions of a city that opened me like a bracing wind sweeps open the shutters of a window to light my soul with wonder.

To fall in love is to open oneself completely and be changed. Paris changed me.

When I returned home, several people asked me what struck me the most about Paris. I was challenged to provide a single highlight and realized that everything coalesced into a larger phenomenon that encompassed the attractive 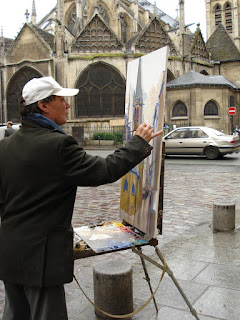 Paris is a beautiful, complex city that cannot be described or defined without giving oneself totally away.
In the final analysis, it is the people who make the city… Parisians are elegant stylish people with a mild reserve that melts instantly when you approach them with sincerity and respect or if you require assistance. Then, they are quick to help and to smile and laugh. And are ultimately the kindest people I have met.

The Parisians express their sensuality with a quiet ease and confidence that is attractive and alluring. They may not gesticulate like the Italians, but they speak eloquently over wine and coffee, and show affection openly (their typical greeting with friends is a kiss on one or both cheeks, and both sexes partake in this wonderful ritual). My apartment 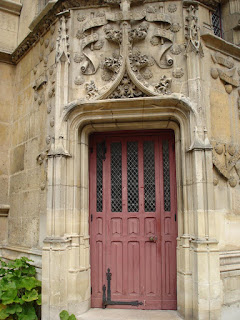 lay just west of the Latin Quarter off Rue Saint Germaine overlooking a maze of cafés, bistros, bars and brasseries. My landlady warned me of the late night noise and suggested I get earplugs. I foolishly didn’t and the first night, as I lay awake in bed during the late night revelry, I was struck by the thought that the crowds of smokers below my window were simply talking and laughing. In North America, it would have been the thundering beat of music and stomping feet and drunken yells. Instead it was the lively carillon of Parisians communicating.

Parisians walk with fluid elegance, confident in their own attractiveness. They embrace and exude an inner beauty that shows in the gracefulness of their gate, the flourish of their dress, and their impeccable poise. Simply put, they are beautiful, but mainly because they do not flaunt it; they simply are.

The French live a balanced life, where the sensual pleasures and relationships with others play 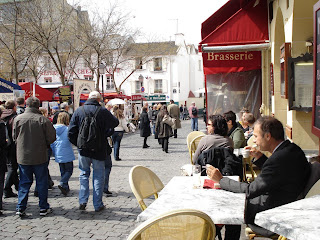 equal to, in fact supersede, ambitions for wealth and power. Paris supports a culture that values art and philosophy over money and power. There are, for instance, more chefs in Paris than there are lawyers; not surprising, actually. Yet, the Parisians are impeccably dressed and can afford a cup of coffee for 2.5 Euros. The difference is that the coffee is exquisite, like everything in Paris.

So, I haven’t come home yet. A part of me, a ghost of me, lingers on the cobble streets and inside the cafés of Paris… tasting and smelling Paris and missing the thrill of being newly defined each day.
Paris, je t'aime...
ton amant, Nina

So true, Nina. Paris is so sophisticated, full of places to explore. A Quality Post.

Thanks, Jean-luc. When were you there? I think I will have to go back again and again...

In fact, I may have to take up partial residence there! LOL! I'm reminded of what Gertrude Stein said: "America is my country and Paris is my hometown." Although I was born in Canada and grew up there, my parents are both from Europe (and lived in Paris for some time); we kids grew up with that kind of background and influence. I think that may be one reason for my affinity and incredible draw to Paris and Europe, generally. Of course, it's entirely possible that I lived in Paris in another lifetime too ( :) ... yes, I think that's it.

I ran across another quote by an author I admire, Scott Fitzgerald, who said: "France has the only two things toward which we drift as we grow older—intelligence and good manners."

As possibly the only Parisian who subsribe to your blog.I make you "Honorary Parisian".You didn't visited by the "Tour" but by the "SOUL" and that the way.If you ever go back,tell me,I have my secret places.
Janus

I was there 10 years ago. When I was there, there was a giant egg under the Tower counting the number of days to the Millennium.

Cool! Wow.... it's hard to believe that the millenium was already close to 10 years ago...and it was quite the deal...everyone thinking the whole world was going to "end" as we knew it... then "nothing" happened. LOL!

Janus, you intrigue me greatly. I will certainly return to Paris, "My home town", and will let you know when I do. We must have a Croque Madame or Escargots de Bourgogne and a Pinot Noir together when I do...Perhaps at a cafe at le Mouffe...