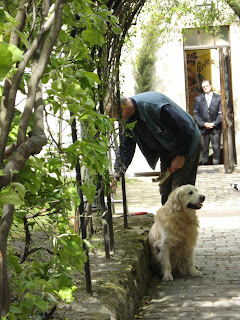 My journey in Paris provided only one of several epiphanies I experienced since my initial encounter with a tornado in Louisville, Kentucky, last January. Challenges that thrust my comfortable bloated self toward an edgy lean cliff of awareness. Soon after the tornado, I had that climate change nightmare. It prompted a spate of blog posts on climate change (Tornadoes & climate change; human health; solastalgia). Posts dedicated to our culture’s headlong hurtle toward a “speed of life” that may result in a collision with disaster if we aren't careful.

Paris showed me another culture; a culture who’s reflective gait lies more in step with Nature, a walk that embraces a pace in keeping with life’s cherished sensual qualities: to see, hear, smell, touch and taste all one can… Taking the time to converse with a friend over a quality coffee or wine; waiting contentedly in line at a local boulangerie or patisserie for their favorite loaf of bread; stopping at the metro station to listen to a local chanteur singing 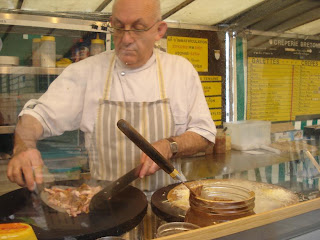 
My good friend, Danny Bloom (the cool guy who envisioned the concept of Polar Cities in a climate-challenged future) showed his colleague, Paco Mitchell (dream analysist and contributing author of Dream Network, see his bio, below) my climate change nightmare and Paco was so intrigued, he HAD to analyze it. Here is his analysis:

Thank you very much for sending me your friend Nina's dream. Very
powerful images.

Certainly the dream shows how what's happening world-wide affects
people generally, and at the same time how it affects her
individually. We all feel the pulse of human activity speeding up, and
some of us, at least, worry about how those activities, in turn,
affect the planet. It's a two-way street: We affect the planet, the
planet affects us. All part of a whole.

What strikes me most about her account of the dream is this
sentence: "I could feel the centrifugal pull of its motion unbalancing
m 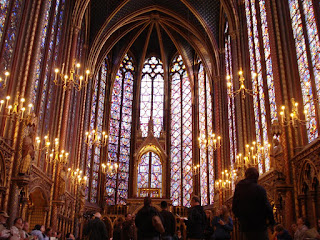 It seems to me that the most important thing she can do is to maintain
her "balance" in the face of unsettling circumstances -- to stay calm
when things get phrenetic, quiet in the midst of clamor, etc. She
wisely points out the paradoxical nature of the conditions we face.
The balance she herself calls for is indeed difficult, but, I would
say, absolutely crucial. In global terms, much depends on large
numbers of individuals achieving such balance in the face of
paradoxical circumstances.

Interestingly, I recently had a simple dream that has me thinking
along unusual lines, and which may just resonate, in a way, with your
friend's dream. In my dream:

I am looking at two jet engines, alongside the man who is responsible
for, or at least knowledgeable about, them. Instead of being mounted 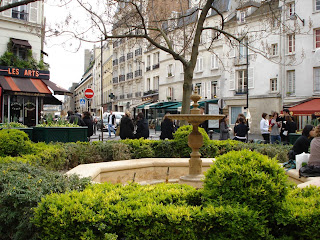 on a plane, as one would expect, however, the engines are part of the
interior of a house. As I watch the turbines, I notice that they are
still spinning, the way they often do at an airport after they've been
shut off -- except that in the dream they are spinning BACKWARDS. I
ask the man if they are spinning backwards in order to remove some of
the CARBON DEPOSITS that have built up inside them. [End of dream.]

After waking and thinking about the dream, I wondered if it had something to do with a global need to "unwind" the fast-paced lives we lead -- the engines, after all, were mounted inside a HOUSE. It occurred to me that anytime we slow down -- or even back up -- and make room and time for simple things, or silence, or just DOING NOTHING, we stand a better chance of opening ourselves to the majesty of being, the beauty of WHAT IS.

In that connection, I've been contemplating writing an article about
raising what I call America's "Epiphany Quotient," which is pitifully
low, of course.
~~~~~~~

Now do you understand why I’m still in Paris? Yes, I’m still there… strolling her beautiful streets, walking her well-kept gardens, adorned with marble statues that line dirt-gravel paths…sitting quietly on a bench, sipping an Antonin Rodet Pinot Noir out of a paper cup and savouring a soft, gooey chunk of heavenly camembert cheese held in my fingers, but only after I’d taken a long appreciative sniff…

Those of you who know me a little also know that I enjoy paradox (it appears in the title of my recent book, Darwin’s Paradox by Dragon Moon Press). Do you know about the "French Paradox?"

The French paradox refers to the observation that the French suffer a relatively low incidence of coronary heart disease, despite having a diet relatively rich in saturated fats. Their constant consumption of red wine is supposedly one of the reasons.

I think it is their balanced pace of life. They take the time to live. And to love.

It's our choice.... To suffer nightmares... Or to dream...
~~~~~
Paco Mitchell, M.A., is a writer, depth psychologist, flamenco guitarist and sculptor living in Santa Fe, NM. He studied and attended to dreams for thirty-six years. Currently he is writing a column on dreams (Dreaming Planet) for the Dream Network Journal. Recent articles deal with Pre-Cognitive Dreams, Destiny in Dreams (3 parts), and Wisdom in Dreams (1 of 3 parts). He is also collaborating on a project with Jungian analyst and author Russell Arthur Lockhart, Ph. D. Among other topics, their project -- in dialogue form -- deals with coming global changes as anticipated in dreams. Paco is interested in "gathering dreams that 'belong to the world': dreams that extend beyond the personal situation of the dreamer and touch on collective issues that affect us all." He would welcome hearing from people who are interested in dreams of this kind, or who have some to contribute. You can reach him at: mitchell@cybermesa.com.

A spellbinding post, Nina. Paris is hard to forget, as are some dreams.

Had any good dreams lately, Jean-luc?...

I heartedly concur with you, SF Girl. I lived in Paris for a year in 1971-72, after college, and loved loved loved it. I first went to France when I was 16 years old to live with a French family in Rouen city north of Paris, where Joan of Arc was burned at the stake, two months of a Rotary travel problem for young people, I could not speak much French at 16, just two years of high school French under my belt, er, beret, at that point, and the French family, the Lebrun family, they could not speak one word of English. This was in 1965.

So I have loved French culture and French people and French food -- not restaurant French food but home cooked French food in homes -- and my first girlfriend was a French girl of 16 named Gisele Bridoux, from Rouen, and a 16 year old boy never forgets his first love, even if he is almost 61 now!

And, yes, first loves are always memorable. In some ways, Paris was like a first love. I will go back.

I usually don't either... just the nightmares! LOL! Now, what would the Jungian psychologists say about that?

super post, Nina. Balance is one of my own abiding concerns, and the prism through which I regard the cycle of the Church year as well as the seasons of nature.