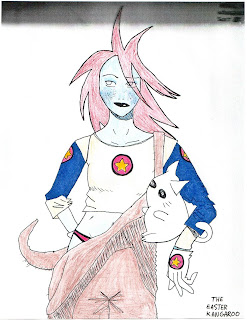 Before I dashed off into the science program on registration day at Concordia University, I was signed up in their fine arts program; I was going to be a commercial artist and go into advertizing. Then, I decided to save the planet instead (big grin). I'm still doing it...

Ever since I was a kid, I've been a cartoonist. I created the first "Get Smart", a spoof on James Bond. I called my cartoon, James Back, 000 (triple O). My recent graphic art piece was a cartoon, The Adventures of SF Girl, which you can see below. Well, my constant fascination for this medium led me to today's Friday Feature, Emma Biron, a fascinating illustrator from Vancouver, B.C.

Emma met me at one of my book signings and immediately caught my attention when she mentioned that she did animation. What follows below are a few examples from her recent comic book, MITMOL, which I'd describe as funky anime-style, with something else. Not sure what to call it, certainly an Emma-signature. Emma tells me that she draw s"everything by hand, using fine liners for inking."

When I asked her to elaborate on MITMOL, Emma told me that it "is set 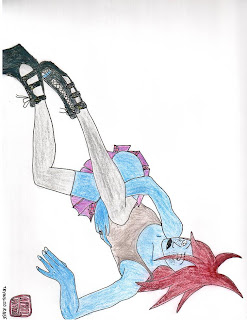 in outer space and follows the characters April, Neko, and a few others. The one with purple hair and blue skin is April. Right now I’m still working on MITMOL, which is an acronym that is not really worth figuring out (it has something to do with the meaning of life)." Okay...

"I love drawing," she continues. "But I think eventually I would like to become a writer. I’m especially looking forward to the comics exhibit (KRAZY) that will be coming to the Vancouver Art Gallery." Me too, Emma! See you there!

I asked Emma to describe her pictures shown here. 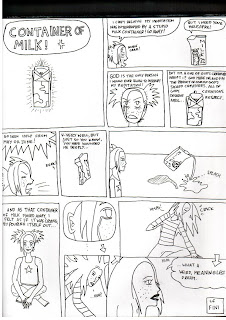 The first cartoon, about talking to a container of milk, is a dream sequence from MITMOL. Says Emma: "Perhaps it has a slightly religious subtext, but that’s entirely subjective."

The next cartoon describes a scene with women in burkas and masks who are interrogating a police officer. Says Emma: "This page was rushed sadly, but I liked its subject matter."

The blue girl is April. Says Emma: "I was inspired for the pose by Egan Shiel paintings. Some comic artists have sexy main female characters, but April usually isn’t, so I was joking when I drew her like this and named it 'trying to raise viewership' ".

The illustration at the top is, according to Emma, "a self portrait I drew when I was feeling sick after eating some cheap food. My friends said my sweater looked weird in it, but it honesty looked like that... I was leaning weirdly!" 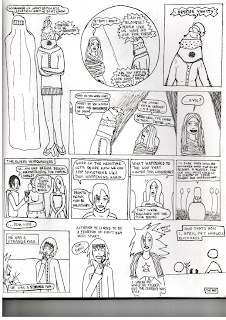 There you go... lean weirdly and you too might draw something that awesome.

Emma's got a certain style there, Nina.

I was going to be a commercial artist at one point- chased it all the way to third year before circumstances changed. Thanks for the heads up about the show at the Gallery... I'll have to check it out, been awhile since I was there.

Hey, Blackburn1, you must live in Vancouver! Cool! Neat to hear about your commercial artist aspirations... I sometimes wonder where I would have ended up if I'd continued down that path instead of the science path I'd decided to take on the day of registration... Ah... I've actually had this conversation with a close friend of mine and we had a good laugh about the possibilities... In the end, I feel that the path you choose is always the right one even if you don't realize it at the time... hmmmm... does that make me an existentialist or a Kabbalist?

Yep... Vancouver is a great city to live in.

I returned to drawing and writing after years away, and found them waiting for me. I've missed them, and it's so good to be back.

Even if the critical decisions have been made, it's never too late to explore other interests, particularly those that require the creative side. It's the same energy.

Not enough space to go into the philosophy. =]

Ah, yes... Philosophy does take time... just look at the French; that's why they drink wine and eat cheese, to sustain them during those extended lunches while they discuss "le grand philosophe"... Geez... I am definitely living in the wrong country...