The Hero’s Journey—Part 3: The Journey’s Map 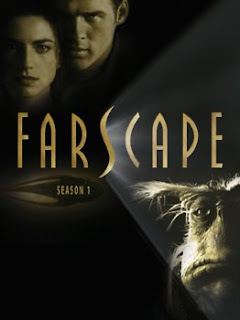 Heroism cannot be measured by the overt grandeur of the act, not even by the ensuing consequences, but by the swelling conquering heart commiting the act--Nina Munteanu

In this article I map out the Hero’s Journey for two popular mythic stories, STAR WARS and FARSCAPE using Christopher Vogler’s 12-stage description of the 3-act storyline (based on Campbell’s 8-step transformation model) and discussed in my writing guide, The Fiction Writer:


You can read my previous posts on the Hero's Journey, the first on "The Journey" and the second on "Archetypes".
This article is an excerpt from The Fiction Writer: Get Published, Write Now! (Starfire World Syndicate, 2009) (Part One of the Alien Guidebook Series). The Hero's Journey is also part of my online writing class and workshops. This lecture/workshop series will be available summer 2010 on DVD at Amazon.

Another fine part to this feature.

Thanks, Jean-luc! When do you folks aboard the USS Enterprise celebrate Thanksgiving?...

Yes... me neither... You know, it struck me when I did this exercise of the mythic journey on both these shows, how much more complicated and multi-layered Farscape was compared with Star Wars.... One could spend a lot of time interpreting this incredible show... Does anyone know where that boy-genius, David Kemper, went?

I was so excited to read your excerpt. After noticing the similarities in mythic stories, and viewing the History Channel's special on Star Wars (specifically, the epic myth), I started inquiring around home school circles about sources and templates for teaching children to write. No one seemed to be able to point me in the right direction. NOW I'VE FOUND IT!! I can't wait to read your book, and get my hands on your "recommended reading." I have reluctant readers and writers, but applying their writing attempts to a template might be something they could bite off and chew. Thank you!

Sadly, the entertainment industry has tended to move away from intriguing and layered drama like FarScape. I know ratings are a major part of decision. What is wistfully apparent is the viewing public's lack of support for such shows. Perhaps the special effects budgets cannot be justified by the ratings and advertising revenue, or even more disappointing, as in The Time Machine, that people have become less and less interested in learning, books, and deep thought? Just musing, don't mind me!

Thanks for your enthusiastic comments, Laura. Just so you know, I am creating a curriculum and associated materials as part of a modular education program that I will be using in workshops and presentations that I am giving throughout North America (and maybe Europe!); it will be available early January.

Yes, your laments are well taken. I too lament how "simple" and plot-driven much of our entertainment has become. As for musings, muse away, Laura! Musing and good discussion is what I live for (well, along with an exquisite pinot noir and camembert!)

Well we don't here in England. May the Enterprise crew will get a replicated turkey soon.

LOL! Thank God for the replicator! Does it replicate stuffing too? If so, I'll be right over! :)

Laura mentions lower ratings as one reason for good shows not being supported. I agree and I think that part of the problem is of the TV networks own making - they are shooting themselves in the foot and can't seem to stop.

1) Schedules are chaotic. No one can get set a rhythm, a habit, for watching. Case in point - I've almost forgotten that Battlestar isn't over yet, but part of me has begun to weary of waiting.

2) Popups. We hate pop ups on our computers, why in blazes do TV suits think I like them any better on my TV? I'm watching a show, getting into its mood, its characters, the plot and POP there is a large, distracting Pop up. It annoys. Even if not consciously. It sends a signal of "hey, don't bother with this show, there's something even better" except when you watch that show being advertised, it will have a pop up as well. They take up huge real estate on the screen. They cover captions for when someone is speaking an alien or foreign language, they cover up sight gags, they cover up scenery, they disrupt the mood of the scene. Shows that have complicated plots or layers to them are more easily negatively effected.

It is as if the TV execs don't care about their own shows - don't care about what the director thinks is important to include in a scene, or how a scene is framed, don't care about the mood or atmosphere (lets show a pop up for a comedy right during the height of a sad scene), or care that the audience gets all the information (covering up captioning for when an alien or foreign person is speaking sometimes covering up important information or a comedic moment such as when the character is saying one thing and the translator is lying and saying something else - we catch that by reading the caption).

This is turning off viewers. Consciously for some. Sub consciously for others. Combined with chaotic scheduling and why is it a surprise that viewership is down?

There are ways they can advertise new shows - they can put a simple scroller on the bottom (like ESPN or CNN) or the semi-opaque mention in a corner. They can also be more intelligent about it, and not put them in on first run episodes, not cover up captions, and not interrupt dramatic or climatic scenes.

Oh, gosh, David....if I watched TV more those pop-ups would be my pet peave. One of the reasons I stopped watching TV was because of the commercial interuptions. Pop-ups would be so annoying and distracting. What next??? When I was introduced to Farscape at an SF convention (long after the show was cancelled, by the way) I bought the DVD set and watched it like one long uninterupted movie. WOW! Now THAT's the way to watch a good show!

I was right in there with the analysis of Star Wars according to the model. Powerful to be able to isolate the basic elements of a great story... as long as I'm not consciously doing that while I'm reading it for the first time. =]

I lost the tv several years ago, and have gone through a couple of TV series (serii? serieses?) on DVD as you mentioned. No going back to tv for this viewer.

Good for you, Blackburn! I admire that. But one does potentially lose out on some gems (for me, Farscape was one) although they have a way of emerging into the market through dedicated fans.

Sorry for ranting about the state of TV nowadays. I'm one of those folk who can lose themselves into a picture and find today's TV so frustrating.

Anywho, I'm looking for The Alien's Practical Guide to Cool Writing - where can one purchase it (Amazon was no help)?

David,I feel the very same as you about TV these days... sigh...

BTW, the Alien's Practical Guide to Cool Writing isn't out yet... :) It will be launched December 13 in print and pdf format and you can purchase it online at the Pixl Press website. It will be available at Amazon and other bookstores in the new year.

Can I use your Hero's journey blog notes and examples (with full credit of course) in my Freshman 102 classes? Also, for my online 102 class in Spring I would like to point them to your blog posts.

You certainly may, David (with credit and links to this blog). I should also mention that these are excerpts from chapters in my book on writing and publishing, due out in PDF and print form on December 13th with Pixl Press ("The Fiction Writer: Get Published, Write Now!" morphed from "The Alien's Practical Guide to Cool Writing". It is part of "The Alien's Guidebook Series on Writing and Publishing", which will include more on craft, non-fiction, etc. You--and your teaching institution--may be interested in purchasing this first writing guidebook. Let me know and I can send a complimentary copy for your consideration.

That's very kind of you. I would love a copy to review. If a hard copy, my department has a book shelf in the faculty lounge for texts we feel our colleagues may be interested in or would like them to review as well and I could place it there. Our dept allows us freedom for ancillary books - for the main text we have book committees review books faculty submit.

Cool! Just so happens that I've been in discussions with the parent publisher about hard cover publication of the book for college audience (we have some interest elsewhere too ... :) You'll get a copy in the mail when it comes out. Can you email me your address, David?

I am woefully behind in thanking you for the examination copies of your book. I have one copy in the faculty lounge for others to look over as a possible text for their classes.

Also, since my father recently passed away after a heroic struggle with cancer, I decided to donate books to my university's library in his name - I will definitely be purchasing another copy of your Fiction Guide to give to the library. My father loved to read and learn, and encourage his children to do the same. He also loved libraries, and with the present budget crisis, my university's library has precious little money for acquisitions. So for all of the above, I figured donating good books in his name is a great way to honor him.

Alas, alack, and wail away - please excuse the grammar errors I just noticed in my last comment :-p.

Ah... LOL! It's good to see that even English professors make those mistakes once in a while... ;)

I'm honored that you've included my blog posts in your course. Hopefully your students will both enjoy and learn from them. :D

I really liked reading what you shared about your father; donating to the university library in his name is a touching tribute. Thank you for including "The Fiction Writer" in your list of donated books.