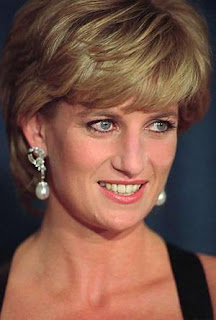 I am a believer in the autopoietic nature of life in the universe, that events in our lives are not just random events, but simply not understood in a seemingly chaotic mosaic. I think everything has a "meaning" in God's eyes, whether we discern it or not. For that reason, I am not surprised that Diana shares Canada's birthday. In some very fundamental ways, this iconic yet unassuming humanitarian embodies the nature and spirit of our nation.

Diana was a philanthropist, characterized for her sense of style, charisma, humour and charity and her selfless devotion to her children, indeed to all children of the world.

Diana became well known for her charity work and her participation in the campaign against the use of landmines, a cause which garnered a Nobel Prize in 1997 in tribute. She also helped to decrease discrimination against victims of AIDS.

In 2001, Bill Clinton said of the Princess: "In 1987, when so many still believed that AIDS could be contracted through casual contact, Princess Diana sat on the sickbed of a man with AIDS and held his hand. She showed the world that people with AIDS deserve no isolation, but compassion and kindness."

True to her humble nature, Diana also made clandestine visits of kindness to the sick, turning up unannounced with instructions that her visit was to be concealed from the media.

Diana could have been a Canadian. I'm proud that Canada shares her birthday.
Posted by Nina Munteanu at 1:32 PM

What a lovely, positive post. It saddens me when people remark on Princess Diana's good points and follow up with what they feel were her negative traits.

It suits them to totally ignore the reasons for her behaviour at times maybe because she was portrayed as superhuman therefore any slip from perception was magnified.

I remember her first trip to Canada, she was so young and naive back then.

So Happy Birthday Diana, and Happy Birthday Canada! I have a airline ticket there in my visions so that one day I shall witness your true magnificance first hand.

Nice post... I was greatly saddened by her untimely death and that of her bf's as well.. The world lost a true princess! I saw her in 85 in Australia.. so young then, too.. I feel honored that I got to see her in person, though! Peace and God bless, Leesa

Thanks, Leesa. Yeah, she really was the people's princess. p.s. neat that you got to see her in person.