My last post for 2008 documented my experience with a dead eagle in the back yard. It brings me to this first post for 2009: about death and rebirth.

Nature—and God— is full of contradiction and paradox. There is so much that we do not understand (at least on the surface)… and apparent contradiction proves that to me: reciprocal altruism; aggressive symbiosis; evolution through cooperation; morphic resonance; autopoiesis and spontaneous order; creative destruction...

I understand something of paradox. As an ecologist, I deal with it all the time. Destruction in creation and creation in destruction is inexorably ingrained in the life-cycles of everything on this planet, indeed in this universe. A forest fire can destroy life but in so doing creates a more vibrant, healthier forest. Nature reveals many such examples from its divine circular patterns, fractal self-organization and infinite spirals.
In an e 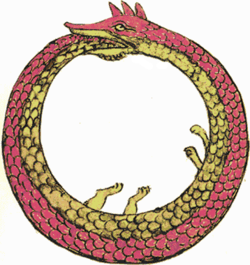 arlier post I discussed the image of the Ouroboros (the mythical snake swallowing its own tail to sustain itself) and how it exemplified the natural cycles of our planet and universe.

The Ouroboros is an ancient symbol depicting a serpent or dragon swallowing its own tail to form a circle. It represents self-reflexivity or cyclicality, especially in the sense of something constantly re-creating itself, the eternal return, and other things perceived as cycles that begin anew as soon as they end (e.g., Phoenix (mythology)).

As the serpent biting, devouring, eating its own tail, the Ouroboros symbolizes the cyclic Nature of the Universe: creation out of destruction, Life out of Death. The ouroboros eats its own tail to sustain its life, in an eternal cycle of renewal. In Gnosticism, it symbolizes eternity and the soul of the world.

Ecologist C.S. Holling suggests that the experience of instability maintains the structure and general patterns of ecosystem behaviour; in other words, that Nature ‘learns’ and accommodates with time. In his classic paper, entitled: “Simplifying the complex: the paradigms of ecological function and structure” (1987) Holling’s model of ecosystem behaviour recognized ecosystems as non-linear, self-organizing and continually adapting through cycles of change from expansion and prosperity to creative destruction and reorganization.
In the final analysis, it is a matter of scale.

We can’t expect the natural world around us to run smoothly and safely for our benefit. New diseases, pollution, species extinction, and climate change are all results of unexpected impacts, whether human-caused or not. Though incredibly elegant, Nature is not simple, or “simple-minded”; Gaia has a complex agenda that we really aren’t terribly privy to yet. I mentioned scale in my Creative-Destruction post. Scale is something you can’t see or easily measure and assess if you are in it. Scale is like hindsight.

The systems of Gaia are complex from the tiniest cell to the complex planet itself. Weather, for instance, is a “chaotic system” that displays a fractal structure and a range of chaotic behaviour on many scales. Temperature, air pressure, wind speed and humidity are all sensitive to initial conditions and interrelated in multi-scales. 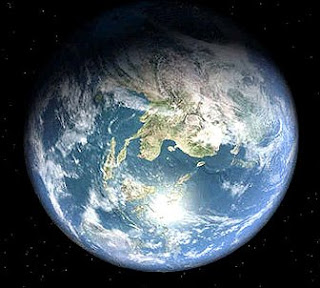 t Stanford University: the complex approach is total Taoist. In Taoism there is no inherent order. “The world starts with one, and the one become two and the two become many, and the many lead to myriad things.” The universe in Taoism is perceived as vast, amorphous, and ever changing. You can never nail it down. The elements always stay the same, yet they are always arranging themselves. So, it’s like a kaleidoscope: the world is a matter of patterns that change, that partly repeat, but never quite repeat, that are always new and different.
Western scientists are just beginning to appreciate this through the application of complexity theory and chaos theory, something the eastern world has “known” since ancient times: humility before nature; respect for richness and diversity of life; generation of complexity from simplicity; the need to understand the whole to understand the part.

I wish you a wealthy 2009: a year’s wealth of unexpected wonder, of genuine love, of unguarded honor, and dazzling bravery. There is no wonder without tolerance; no love without humility; no honor without sacrifice; and no bravery without fear. I wish you the gift of unbridled compassion. As Dante Sarpé (in my story, Arc of Time) said: Without compassion to fill it, knowledge is an empty house, casting its shadow on our courage to embrace the paradoxes in our lives: to feel love in the face of adversity; grace when confronted with betrayal.

You;re reminding me of the movie 'The Butterfly Effect' here, Nina. It goes with great depth into the chaos theory.

Ah, yes. I didn't actually see that movie yet...funny, you'd have thought I would have. I shall make a point of it, Jean-Luc.

Thank you for a wonderful post. Perfect thought for a brand new year!
Happy New Year!

Thank you, Metapsyche! It is a topic that continues to intrigue me. A Happy New Year to you as well.

Happy New Year to you, Nina!

Good thoughts! Let's look for the best in what comes our way. Meanwhile, have an ice day. ;]

HAR! Good one, Blackburn! I think the ice may melt with all this rain we're now having (back to Vancouver weather)... :) And, yes, let's have ourselves a wonderful 2009!
Best wishes for the New Year, Blackburn

Hello there my friend! I found your blog very interesting so I have added your link in my Blogroll. I hope you'll link me back. Have a nice day! http://hapiblogging.blogspot.com/