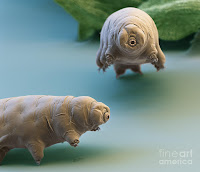 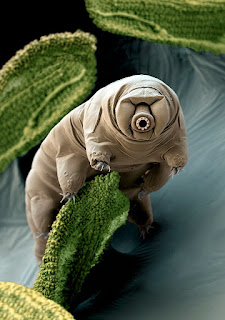 Blika lived in Mossland with her clone sestras, gathering and sucking the delicious juices of detritus and algae. Never looking up or in much of a hurry, she lumbered from frond to frond on eight stubby legs in a gestalt of feasting and being.

Blika led a microscopic life of bloated bliss—unaware of forests, human beings, quantum physics or the coming singularity…
A sudden fierce wind wicked her water away. In a burst of alien urgency, she wriggled madly for purchase on the frond as it shivered violently in the roaring wind. Blika lost hold and the wind swept her into a dark dryness. Her liquid life-force bleeding away from her, Blika crawled into herself. The moss piglet felt herself shrivel into oblivion. 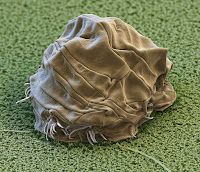 No, not oblivion… more like a vast expanse…
She had entered a wonderland of twinkling lights in a vast fabric of dark matter. Where am I?
It occurred to her that she had never thought such a thing before. Am I dead? She’d never thought about existence before either. What has happened to me? And where are my sestras? She felt an overwhelming sadness. Something else she’d never felt before and wondered why she hadn’t. Did it have to do with that liquid that had always embraced her with its life-force? 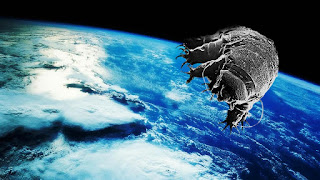 Here, in the darkness of space, she felt alone for the first time, separated from the plenum.
“Welcome, sestra!” boomed a large voice.
Blika beheld a being like her with eight arms and hands, seated on a throne and wearing a jeweled crown. “Why do you call me sestra?” Blika asked.
“Because we are ALL sestras! You are a Tardigrade, aren’t you?” She waved all eight arms at Blika. “Well, I am your queen!” She looked self-pleased. “You are in Tunland now! The land of awareness. And now that you are self-aware, you can do anything! We’re special,” the queen ended in smug delight. The folds of her body jiggled and shimmered. 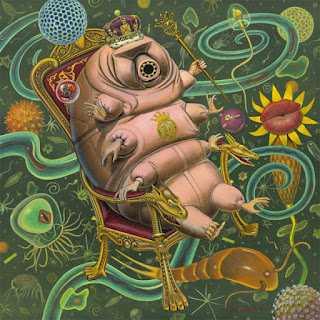 “Why are we special?” Blika asked.
“Because we are!” the queen said sharply, already losing patience with her new subject. “Don’t you know that you can survive anything? Ionizing radiation. Huge pressure. Boiling heat. Freezing cold. Absolutely no air. And no water…”
Blika gasped. Water was the elixor that connected her to her sestras and her world… her…home…
“How do you think you got here, eh?” the queen mocked her with a sinister laugh. Blika cringed. The queen went on blithely, “So, where do you come from, piglet?”
“I’m trying to find my way home…”
“Your way? All ways here are my ways!”
“But I was just thinking—”
“I warn you, child…” The queen glowered at her. “If I lose my temper, you lose your head. Understand?” 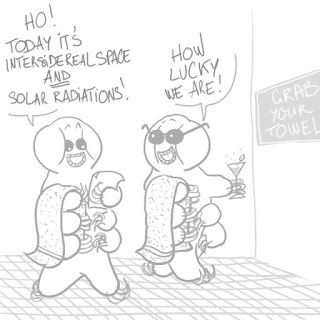 Blika nodded, now missing her home even more.
“Why think when you can do!” the queen added, suddenly cheerful again. “First there is BE, then THINK, then DO. Why not skip the think part and go straight to the do part? In Tunland we do that all the time,” she went on blithely. “And, as I was saying, here we can do anything!”
The queen grabbed Blika by an arm and steered them through the swirling darkness of space toward a box-like floating object. “This is my doctor’s Tardis…”
“Doctor who?” Blika naively asked.
The queen shivered off her annoyance and led them eagerly through the door and into her kingdom.
They entered a strange place of giant blocks and whining sounds beneath a dark swirling sky.
The first thing Blika noticed was the huge tardigrades floating above them like dirigibles! Others were dressed in suits holding little suitcases and walking into and out of the huge blocks through doorways. 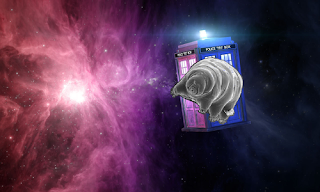 “We’ve crossed into another dimension—my universe,” the queen announced cheerfully. “Here you can do anything you want. So, why be tiny and feckless when you can be huge and powerful!” She studied Blika. “This is your moment to do what you could never do before. Think of the possibilities! You too could be huge!”
Blika stared at the strange world of smoke and metal and yearned for her simple mossy home.
As if she knew what Blika wanted, the queen quickly added, “But you can never go back home!”
“Why not?” Blika asked, disappointed. 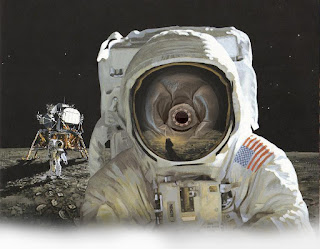 “Because, that’s why!” the queen shouted.  Squinting, she added, “It’s too late. It’s just not done! Once you’ve learned what the colour green means you can’t erase its significance!”
“But I still don’t know what the colour green means,” Blika complained. “And, besides, I think you’re wrong. Becoming self-aware doesn’t stop you from going home. It just changes its meaning. And if I can really do what I want, then you can’t stop me. I’m going home to my family.”
The little hairs on the queen bristled. Then she grew terribly calm. “I won’t stop you, but…” The queen pointed to the floating tardigrades above them. “My water bear army will. I sentence you to remain in Tunland forever for your crime!”
“I haven’t done anything…yet.”
“You’ve broken the law of thinking before doing. In Tunland you have to skip that part—”
“You just made that up—” 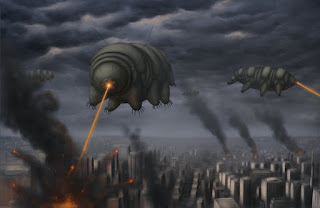 “Doesn’t matter!” shouted the queen. “Sentence first, verdict afterwards!”
“That’s nonsense,” said Blika loudly. “The idea of having the sentence first.”
“Hold your tongue!” said the queen, turning a shade of chartreuse.
“I won’t,” said Blika.
“Off with your head!” the queen shouted at the top of her voice, pointing to Blika with all eight of her appendages. The water bear army hovered over Blika, taking aim. They were going to get more than her head with those lasers, Blika thought, and scurried for cover faster than her stubby eight legs had ever moved before. She was doomed—
Then, just beyond her sight, she saw—no felt—something far more significant than the colour green…or a huge bloated water bear army about to shoot her… 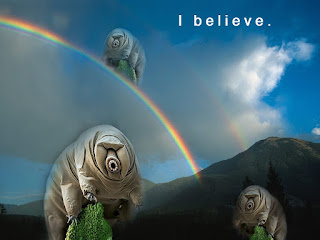 Water! She could taste it, smell it, hear it. Blika rejoiced with thoughts of her green home.
The water came in a giant wet wave of blue and silver and frothy green. Tunland sloshed then totally dissolved. Blika surfed the churning water. That green! She knew what it was! Blika reached out with her deft claws and snagged a tumbling moss frond. It finally settled and there were her sestras! So many of them clinging to the same green moss! She’d found her family! She was home! Yes, it was a different home and different sestras, but it was also the same. Love made it so…
For the first time, Blika looked up … and saw a bright star… 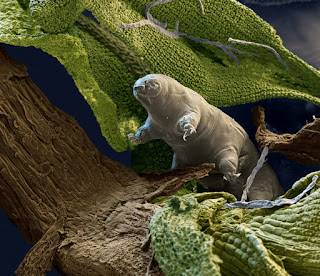 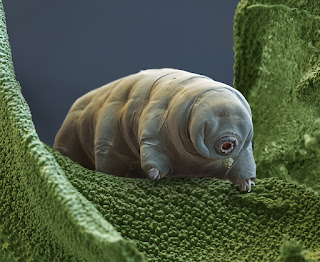 Tardigrades respond to adverse environmental stresses through “cryptobiosis”, a process that greatly slows their metabolism. Tardigrades survive dry periods by shriveling up into a little ball or tun and waiting it out. They make a protective sugar called trehalose, which moves into the cells to replace the lost water.
You could say that the water bear turns into a gummy bear. 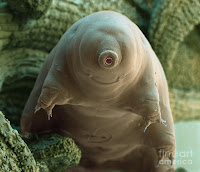 Tardigrades have revived after a 100 years of desiccation. The antioxidants they make soak up dangerous chemicals and tardigrades can also repair damaged DNA from long term dry-out. In low oxygen, the tardigrade stretches out, relaxed muscles letting more water and oxygen enter its cells. The tardigrade’s cold-resistant tun also prevent the formation of ice crystals that could damage cell membranes.
Tardigrades survive temperatures, pressures and ionizing radiation not normally found on Earth. All this raises questions of origin and evolutionary adaptation. How—and why—have tardigrades developed the ability to survive the vacuum and ionizing radiation of space? Some suggest that it’s because they originated there. Scientists argue that they developed extreme tolerances from Earth’s volatile environments (e.g., water bodies that freeze or dry up, and undergo anoxia). But, if they can make it there, they can make it anywhere. So, where is “home” really?… 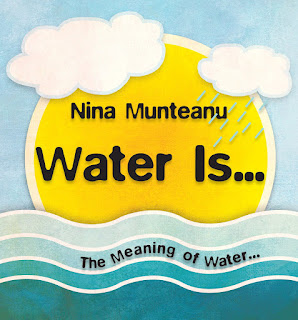 My Book “Water Is…” by Pixl Press explores this creature and many other interesting things about water. Look for it in Spring 2016 on Amazon, Chapters and in bookstores near you.

Nina Munteanu is an ecologist and internationally published author of award-nominated speculative novels, short stories and non-fiction. She is co-editor of Europa SF and currently teaches writing courses at George Brown College and the University of Toronto. Visit www.ninamunteanu.ca for the latest on her books. Nina’s recent book is the bilingual “La natura dell’acqua / The Way of Water” (Mincione Edizioni, Rome). Her latest “Water Is…” is currently an Amazon Bestseller and NY Times ‘year in reading’ choice of Margaret Atwood.
Posted by Nina Munteanu at 7:41 PM No comments: