Decades ago, when I first visited Port Renfrew on the west coast of Vancouver Island, the town still thrived in its prime as a timber town. Most of its inhabitants were connected with the logging industry in some way. This coastal fishing and logging town is surrounded by Pacific temperate rainforest in the wettest zone of the province. The annual rainfall of the Coastal Western Hemlock Zone goes up to 4,500 mm. Moss covers trees in a thick green felt and hangs like long “green man” beards. A diverse mix of trees of every size and age create what painter Emily Carr called “perfectly ordered disorder designed with a helter-skelter magnificence.”

The wet Pacific temperate rainforest holds the greatest biomass—both alive and dead—of any ecosystem on the planet, writes Harley Rustad, correspondent with The Walrus and author of “Big Lonely Doug.” This is because the cycle of life and death is slower in the Pacific northwest: a fallen cedar log will remain intact for a century, allowing biomass to accumulate.

While I appreciated the rainforest and lamented the active logging of old growth, my focus was on the coast. I’d brought my phycology class from Victoria to Botanical Beach to walk the low tide. There, on the very edge of a potted sandstone ledge, along the craggy intertidal shores, I was in search of another “tree”, the elusive sea palm (Postelsia palmaeformis), a brown macro-alga that was only visible at very low tide. We had to time our visit impeccably to find my elusive gem of the sea—which I happily did. Aside from the sea palm, hundreds of species of plants and animals inhabit the sandstone tide pools and rocky shoreline of the beach. First used by Dr. Josephine Tildon of the University of Minnesota in the late 1800s as a research station for students and researchers, the beach continues to draw tourists, scholars and locals to its beautiful sandstone-carved scenery.

Fast forward to 2019. I am driving with my friend Anne up the West Coast Road (Highway 14) to Port Renfrew from Victoria. Our drive to Port Renfrew took two hours, which included mandatory great coffee stops such as Serious Coffee in Sooke and Shirley Delicious, a charming cafe in Shirley. This time, my focus was on the big trees. I’d hiked through Carmanah decades ago, shortly after it was made into a provincial park to protect the valuable old growth forest and giant trees. Since then, I’d left British Columbia and lived in Nova Scotia for a while, teaching and writing. Then I ended up in Toronto where I currently teach writing at the University of Toronto and George Brown College. This recent trip in 2019 was dedicated to my search of old growth forest wherever I could find it near Port Renfrew—before it was all logged away.

I’d heard of the recent actions by timber companies—such as Teal-Jones Group (Edinburgh Mountain); TimberWest; Interfor; BC Timber Sales (BCTS) in Schmidt Creek; Western Canadian Timber Products; Forest Products; West Fraser; and others—to log as much and as quickly as possible before new regulations came in, or simply to get it all before none was left. The term “extreme old-growth logging” was coined from the term “extreme fossil fuels” that emerged as oil, gas and coal industries push into areas that are harder to extract from: oilsands, fracking, Arctic drilling and ultra-deepwater oil which cause greater risks and more damage to the environment and the climate. Extreme old-growth logging applies to both expedient and aggressive logging that often abuses the BC Forest Practice Code and other legislation and guidelines, such as clearcutting old-growth too close to rivers and streams or coastlines, and cutting on steep inclines prone to erosion and landslides. This is quite simply an insane and greedy timber-grab with no consideration for the diverse life-filled and life-giving ecosystems of the unique ancient forests they are destroying.

Judith Lavoie of Focus on Victoria writes that Schmidt Creek has been a textbook case of BCTS ignoring local input, according to conservation organizations. The steep slopes of the Schmidt Creek valley are above the orca rubbing beaches at Robson Bight, leading to fears that the world-famous beaches will be degraded by sedimentation or landslides.

In addition to the Schmidt Creek logging, other recent controversies involving BC Timber Sales include its plans to log 109 hectares of old growth adjacent to Juan de Fuca Provincial Park, a proposal that provoked a public outcry and is now on hold to allow consultations with the operator of a nearby eco-lodge; clearcut logging in the Skagit Doughnut Hole, beside Manning Park, a decision that brought protests from the US and accusations that BC was breaking an international treaty; and clearcut logging in the Nahmint Valley, west of Port Alberni, where one of the biggest Douglas firs in Canada was felled, despite objections from conservation groups.

The BC Green Party wants a moratorium on old-growth logging on Vancouver Island, with development of sustainable forestry practices. Sonia Furstenau, Green Party House Leader, finds it disappointing that old-growth logging is continuing at the same rate as under the previous Liberal government. “While there seems to be an acknowledgement that the world and conditions have changed very quickly, the practices aren’t [changing],” she said.

When Anne and I reached Port Renfrew, I was unprepared for the overt shift in the community from a commercial fishing and logging town to one dedicated to eco-tourism and the preservation of old growth forests. No doubt, many in the community remain staunch pro-timber; but a new face had emerged. One dedicated to cherishing the old growth forests and tall trees. Port Renfrew has even branded itself as Canada’s tall tree capital. Their motto, which I saw in virtually all the hotels, cafes, restaurants and signage is: “Wild Renfrew: wilderness within reach.” Port Renfrew has long been a gateway for serious hikers of the Westcoast Trail from Tofino and the more recent Juan de Fuca Trail to the south. Port Renfrew promotes itself as a centre for outdoor recreation, wilderness seekers, and those who appreciate the unbridled magnificence of old growth forest.

The Port Renfrew Chamber of Commerce has joined environmentalists in arguing against the recent government plans to sell 109 hectares of old-growth forest in seven cutblocks that include two within 50 metres of Juan de Fuca Provincial Park. Environmental groups (such as Ancient Forest Alliance) and forest ecologists have argued for a decade that the trees act as a buffer against climate change and the loss of endangered species. The chamber insisted that the trees are more valuable standing and that clearcutting will hurt tourism. They cited the example of Avatar Grove: “We know from the Avatar experience that old-growth forests attract tourists — not just locally but from all over the world…It’s a lot better than cutting them down, because you cut them down once, you run them through the sawmill, they build somebody’s deck and that’s it. But, if you leave them standing, people come over and over again to look.” Places I visited include the following:

Avatar Grove: Just a fifteen minute drive from Port Renfrew on fairly good dirt road lies Avatar Grove, a centuries old forest ecosystem of giant cedar, Douglas-fir, spruce and hemlock that was saved from logging through major efforts by activists such as the Ancient Forest Alliance and the discovery of giant trees worth protecting.

Big Lonely Doug: farther down the dirt road past some old growth in the middle of a clearcut stands a single giant Douglas-fir. “In 2011, a logger named Dennis Cronin stood under one of the largest trees in Canada and said no. He wrapped green ribbon around the Douglas fir’s nearly 12-metre circumference and saved it from being cut down. After the forest around it was gone, and images of a single enormous tree left standing on its own in the middle of a clear-cut began to be circulated, the tree, located just outside Port Renfrew on Vancouver Island, became a symbol for the dwindling old-growth forests in British Columbia,” writes Harley Rustad in the Globe and Mail. 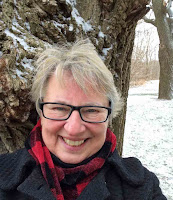 Nina is a Canadian scientist and novelist. She worked for 25 years as an environmental consultant in the field of aquatic ecology and limnology, publishing papers and technical reports on water quality and impacts to aquatic systems. Nina has written over a dozen eco-fiction, science fiction and fantasy novels. An award-winning short story writer, and essayist, Nina currently lives in Toronto where she teaches writing at the University of Toronto and George Brown College. Her non-fiction book “Water Is...”—a scientific study and personal journey as limnologist, mother, teacher and environ- mentalist—was picked by Margaret Atwood in the New York Times as 2016 ‘The Year in Reading’. Nina’s most recent novel “A Diary in the Age of Water”— about four generations of women and their relationship to water in a rapidly changing world—will be released in 2020 by Inanna Publications. www.NinaMunteanu.ca; www.NinaMunteanu.me

Posted by Nina Munteanu at 6:58 PM No comments: