The Monarch: Rallying Call of A Dying Butterfly 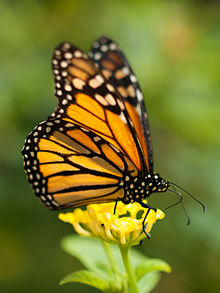 Several months ago, I reviewed Barbara Kingsolver’s New York Times Bestseller Flight Behavior. The story, whose premise is climate change and its affect on the monarch butterfly migration, is told through the eyes of Dellarobia Turnbow, a rural housewife in Tennessee, who yearns for meaning in her life. In the opening, Dellarobia stumbles upon a monarch massing in the forested hills above her farm. Although Dellarobia doesn’t realize it yet, that moment proves life-changing for her:

“A small shift between cloud and sun altered the daylight, and the whole landscape intensified, brightening before her eyes. The forest blazed with its own internal flame…The mountain seemed to explode with light. Brightness of a new intensity moved up the valley in a rippling wave. Like the disturbed surface of a lake. Every bough glowed with an orange blaze…Trees turned to fire…The flame now appeared to lift from individual treetops in shows of orange sparks, exploding the way a pine log does in a campfire when it’s poked. The sparks spiraled upwards in swirls like funnel clouds….It was a lake of fire, something far more fierce and wondrous than either of those elements alone. The impossible…She was on her own here, staring at glowing trees…Unearthly beauty had appeared to her, a vision of glory to stop her in the road. For her alone these orange boughs lifted, these long shadows became brightness rising. It looked like the inside of joy, if a person could see that. A valley of lights, and ethereal wind. It had to mean something.”

Since that review, COSEWIC (the committee on the status of endangered wildlife in Canada) reported that the monarch is now officially “endangered”, victim to habitat loss of wintering grounds (through illegal logging) in Mexico, along with increasing destruction of milkweed caterpillar breeding habitat by drought and insecticide in Canada and the United States. While GMO corn, canola and soybeans have been engineered to be immune to the herbicide Round-Up (glyphosate), which is used liberally in large corporate farms, milkweed and other native “weeds” are destroyed. 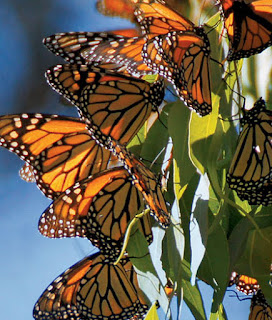 Union for Conservation of Nature. The monarch has precipitously declined—by 90% in the last two decades since Round-Up was aggressively introduced. Our role in Canada is paramount as part of the monarch’s cycle. Overwintering butterflies leave Mexico in early spring and migrate into the southern US, where they lay their eggs on milkweed plants before dying. Like in a relay race, the caterpillar offspring feed exclusively on milkweed, then as adults migrate further north into Canada to reproduce again and then return to Mexico to overwinter.

Future generations of monarchs, faced with changing climates, may have a hard time finding their way home, writes Nayantara Narayanan in a recent Scientific American article (2013). “A monarch butterfly navigates using a sun compass in its mid-brain and circadian clocks in its antennae. But, until now, what makes a monarch reverse its direction has remained a mystery. New research shows that the chill at the start of spring triggers this switch. Monarch butterflies, having flown south in the fall, reorient themselves and start flying north after they've been exposed to lower temperatures, according to the study published … in Current Biology.” Researchers had to “go from signal to behavior” to figure it out. They determined that with temperature being a critical trigger for the monarch’s northward journey, climate change could be a “big spoilsport in its mass migration.” Unruly and unseasonal storms coupled with microclimate degradation (e.g., logging forests and killing milkweed through drought), are impacting monarch survival.

The monarch butterfly is just one species—a sentinel, if you will—in what many scientists are calling the largest mass-ever extinction in Earth’s history; and one caused by runaway global warming. Two hundred and fifty million years ago, 90% of all living things were wiped out in the Permian mass extinction. Researchers in Canada, Italy, Germany and the US argue that volcanic eruptions pumped massive amounts of carbon dioxide into the air, causing average temperatures to rise by eight to 11°C in their paper in the journal Palaeoworld. This melted vast amounts of methane (just like what is currently happening in the shelf sediments and permafrostregions of the northern hemisphere), causing temperatures to soar even further to levels “lethal to most life on land and in the oceans.”

Climate change—and all that is associated with it—is altering our planet irreparably, one sure-footed step at a time. And it is doing this regardless of geographic boundary, political affiliation, scientific knowledge or religious belief. Climate change is a global phenomenon that can provide us with the very best opportunity to unite as a global community.

In 2014, Canada, the U.S. and Mexico cooperated as Justin Trudeau, Barack Obama and Enrique Pena Nieto signed the North American Climate, Clean Energy, and Environment Partnership Action Plan—something, which I wonder if the current U.S. administration will now honour.

Focusing on the monarch or any other sentinel is a sound rallying approach that can have significant cumulative effects. The entire world is inexorably linked, after all.

Kingsolver ends her book with Dellarobia caught in a mountain flood that may take her life; yet, she remains suspended—transfixed in the moment of the miracle unfolding before her. The monarchs survived the winter and are taking flight:


“The vivid blur of their reflections glowed on the rumpled surface of the water, not clearly defined as individual butterflies but as masses of pooled, streaky color, like the sheen of floating oil, only brighter, like a lava flow…Her eyes held steady on the fire bursts of wings reflected across the water, a merging of flame and flood. Above the lake of the world, flanked by white mountains, they flew out to a new earth.”

Let us hope that we are part of that new earth.

Things that you can do to help:

Posted by Nina Munteanu at 6:05 PM No comments: