The Bumblebee, the Silent Rock Star of The Natural World

When I was a child, my favourite little creature was the bumblebee. Its fat, fuzzy body and dirigible-like flight—legs bulging with pollen—and hypnotic buzz mesmerized. Never mind that my first sting was from a bumblebee when I was four years old. It was my fault and I knew it; I’d tried to touch its furry body. Everything about them was sweet and wondrous. How they buzzed from flower to flower and then crawled about to position themselves to take the pollen. I used to watch them for stretches of time. I pushed myself close until my nose was inches away. I studied their fuzzy striped body, how it moved in a kind of fat elegance. Pollen covered their bodies like lint. Sometimes their legs bulged yellow or orange with pollen. When they took flight in a sudden buzz, they seemed to defy gravity. They ascended with wings that whirred into invisibility.

Why Bees Are So Cool

Bees pollinate 71 of the 100 crops that provide 90% of our food. Most of this pollination is carried out by wild, native bees, including bumblebees. Bumblebees pollinate many fruits and vegetables, such as tomatoes, peppers and cucumbers. Their fat and fuzzy bodies make them ideally suited for cool spring weather, according to Shiela Colla, environmental professor at York University. “Some of them come out early spring, some of the species come out late in fall, so you can’t just knock out a few species because then there are gaps in what will get pollinated. All bees are important pollinators,” says Colla.

There’s been a major decline in insect pollinators, including bees and butterflies. Much of this decline can be directly linked to neonicotinoides—a nasty nicotine-like pesticide group that impacts a bumblebee queen’s ability to feed and reproduce, according to Nigel Raine and other researchers at Guelph University, who published their study in the biological research journal of the London-based Royal Society. Along with habitat destruction, and climate change related disease, pesticides threaten the bumblebee.

The rusty patched bumblebee (Bombus affinis) was once one of the most common wild bees in Canada in the 1970s. It was the fourth most common bumblebee species out of 14 in Ontario. I remember seeing many of them in the Eastern Townships of Quebec, where I grew up. It was only spotted twice in the past 10 years. This species is endangered in Canada and critically endangered globally (IUCN assessment). This hard-working species of bumblebee is now on the brink of extinction. Scientists suggest that at the local level pesticide use and habitat loss are the key impacts to this beautiful bee.

The Ontario Recovery Strategy for rusty-patched bumble bee calls for a number of conservation measures, including restoring habitat, continuing to search for wild rusty-patched bumble bees at their historic sites and, if any queens can be located, establishing a conservation breeding program. The Canadian government is phasing out the agricultural use of on neonic, imidacloprid, which was found in groundwater in harmful concentrations to aquatic insects. Others include thiamethoxam and a widely used neonic clothianidin. Ontario is also phasing out the blanket useof neonics on corn for grain and soybean crops. The European Union is reportedly set to impose a wider ban this year on neonics.


What We Can Do

Make your own milk-carton bee nest.

This year Canadians celebrate 150 years of existence as a nation. You won’t necessarily see a big demonstrative splash. We are not as stridently patriotic as some. Canadians’ love for our country flows more like a deep and silent river; in nuances and tones of “belonging”, rather than shouts and cries of “us and them.”

We are a northern country. The boreal forest covers over three quarters of our nation. The Huffington Post recently published a rather cavalier article on Canada that suggested it was 90% “empty” (of people, that is). I was offended by this off-hand designation from a totally people-centric perspective. It disregarded all other life. Life that for Canadians is an integral part of Canada and forms who and what we are as Canadians. This mostly “emptiness” is full of life and all that supports it—pristine wilderness, with its own intrinsic value gives Canada its unique “face.” It is, in fact, this very “emptiness” that may well prove to be the salvation of the entire planet. 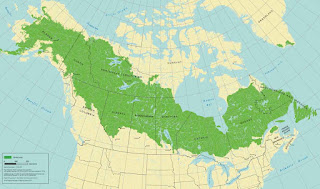 Canadians love this country for its forests, parks, mountains, rivers, lakes, and wetlands. We love the northern beauty of the Arctic and the vast rolling Prairies. “We base our national identity on nature,” writes David Richard Boyd, environmental lawyer, in Sustainability Within a Generation (David Suzuki Foundation, 2004). “From the maple leaf on our flag to the wildlife on our currency. Individual Canadians enjoy a deep-rooted connection with the natural world.”

For instance, 98% of Canadians view nature in all its variety as essential to human survival. Ninety percent of us consider time spent in natural areas as children very important. Eighty-five percent of us participate regularly in nature-related activities such as hiking, bird watching, and fishing. “Canadians are among the most staunchly pro-environment citizens on the planet,” Boyd writes. “Nine out of ten Canadians rate the environment as one of their top concerns. Eight out of ten Canadians believe that environmental protection should be given priority over economic growth.” This represents the highest proportion of support for environmental protection in the thirty countries surveyed by Environics International.

So, what am I doing to celebrate this beautiful country that has given me a place and a home? I’m going to vote for our national flower. A campaign was launched as part of our 150th birthday to name the flower of Canada. Sonia Day of the Toronto Star provided the short list of three flowers:

Hooded ladies tresses (Spiranthes romanzoffiana), a wild orchid discovered in Canada’s north with white flowers arranged in a twisting pattern around the stalks.

Bunchberry (Cornus Canadensis). This diminutive dogwood forms a carpet of leaves in shady moist areas of forests and woodlands. The flowers are an aggregation surrounded by four white petal-looking sepals; in the fall the flowers turn into bright red berries.

All three are native in every province and territory of Canada; this is a feat when one considers our diverse biogeoclimatic areas. Selection criteria included the need for the flower to naturally exist in every part of Canada. They also took the Latin name into consideration. “Borealis” (meaning northern) and “Canadensis” (meaning from Canada).

My personal favourite is Bunchberry. It is truly Canadian, preferring Canada to anywhere else, and I grew up with this plant, which flourished in the woodland behind my house.

To vote go to surveymonkey.com/r/8Z9WDW9.
The deadline is June 30 and the winner will be announced July 1, Canada’s birthday.

Pynn, Larry. 1999. Environment Tops Poll of Canadian Concerns: The High Ranking Given Pollution and Conservation Issues is Being Attributed to an Improving Economy. Vancouver Sun. 20 September, A4.

Nina Munteanu is an ecologist and internationally published author of award-nominated speculative novels, short stories and non-fiction. She is co-editor of Europa SF and currently teaches writing courses at George Brown College and the University of Toronto. Visit www.ninamunteanu.ca for the latest on her books. Nina’s recent book is the bilingual “La natura dell’acqua / The Way of Water” (Mincione Edizioni, Rome). Her latest “Water Is…” is currently an Amazon Bestseller and NY Times ‘year in reading’ choice of Margaret Atwood.
Posted by Nina Munteanu at 11:32 AM No comments: