Leslie Wu of Forbes Magazine beat my tagline today in wishing you a Happy New Year: Says Wu: “Although we’ll be ringing in the year of the fire monkey for Chinese New Year in February, it could be said that 2016 will be the year of the cat…Cat cafes are springing up across Canada, where those lacking feline companionship can reserve time with these most reserved of creatures. From Vancouver to Montreal, the stressed, lonely or just plain cat deprived can cuddle their woes away with adoptable new friends (in partnership with the local SPCA or Humane Society). Although cat cafes have been popping up globally, Canada’s entry into the market has been relatively recent.”
The domestic cat hasn’t always been in this position in society. In fact, the cat has had a complicated history with humanity since it first stepped into some Natufian’s rice granary and slammed its paw on a mouse. It hasn’t been easy for Felis silvestris sybica…
From Bastet to a witch’s familiar… from the Chesire Cat to Schrödinger’s Cat … from Japan’s Beckoning Cat to Hello Kitty … from Aristophanes’ “the cat did it” to That Darn Cat’s wily DC … from Pokemon’s Meowth to A Cat in Paris … from Puss in Boots and Tom Kitten to Grumpy Cat … Humanity has deified, vilified, coddled and persecuted the domestic cat. Both icon and sacrifice, the domestic cat has lived in paradox alongside humanity for centuries. Perhaps because it is itself a paradox.
When I observe my cat friend, furled out languidly, yet poised to leap, I recognize the unfettered wildcat deep in his soul. I recognize the anima mundi in his reflective eyes. The domestic cat embraces paradox: relaxed and alert; fierce and calm; tame and savage; mysterious and comforting. He embodies yin and yang. 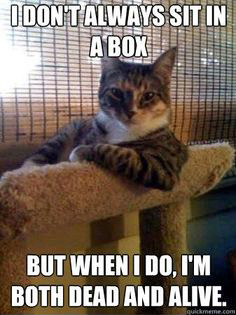 The story of the domestic house cat’s evolving journey is subtle, complex and rife with contradiction. The domestic cat has evolved from wild hunter to opportunist predator and as partner alongside humanity as companion and symbol.
It began about 11 million years ago when the Pseudaelurus, a medium-sized catlike animal, roamed the steppes of central Asia. Although it went extinct in Asia, receding sea levels permitted the Pseudaelurus to migrate across what is now the Red Sea into Africa, where it gave rise to the caracal and the serval. The Pseudaelurus also crossed the Bering land bridge into North America and gave rise to the lynx, bobcat and puma. Isolated migrants to South America created the ocelot and Geoffroy’s cat. The big cats—lions, tigers, jaquars and leopards—evolved in Asia then spread to other parts of the world. 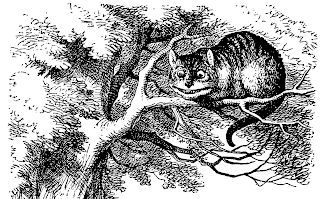 In Japan, a cat may find itself doted on to the point of “torture”. “Hello Kitty, arguably Japan’s most famous export, is only the tip of the iceberg,” wrote La Carmina in her blog post of 2013. “Take a walk around Tokyo, and you’ll see cat faces on every product imaginable...” from bowler hats with pointy ears, kitty petting zoos and Chesire cat pizza. Japanese folklore give cats a protective power that symbolize good fortune.

Marks writes about Japan’s “Beckoning Cat” (the maneki neko figure of the cat with one raised paw), which represents the goddess of mercy. According to legend, a cat sitting outside of the temple of Gotoku-ji raised her paw to acknowledge the emperor who was passing by. Attracted by the cat’s gesture, the emperor entered the temple just as lightning struck the very spot where he had been standing; the cat had saved his life and was accorded great honours. The Beckoning Cat image is thought to bring good luck when given as a gift and remains a very popular present in Japan. Several islands off Japan have been called “Cat Island”. On Tashirojima Island in Ishinomaki City, cats come to welcome the boats at the port. Many wait patiently around the fishing port for fishermen to return. Neko-jinja located in the central area of the island enshrines a “cat god” in hope of a good catch and safety of the fishermen. Aoshima Island in the Shikoku area is also known as “Cat Island”. The catch-phrase of this island is “15 residents and 100 cats.”

In Toronto, where I presently live, TOT the Cat Café, a coffee house, lounge and place to see and play with cats, has opened in November 2015 on College Street. The café has a lounge where patrons may interact with up to ten cats from the Toronto Humane Society (who are obviously up for adoption!). Friends and business partners, Kenneth Chai and Scott Tan are the cat fans behind the new café. The duo quit their jobs in Saskatoon and moved to Toronto, investing all their own money to realize their vision — a place that would offer both lattes and friendly felines. TOT is the first cat café in Toronto but not in Canada. There are several in Quebec, including Le Café Des Chats in Montreal (opened in 2014) and one in Chelsea, Quebec (Siberian Cat Café in late 2015) and Vancouver’s Catfé on West Pender, which opened in mid-December of 2015. Toronto’s Kitty Cat Café—self-professed “Purr Therapy and Coffee Lounge” in addition to pet adoption—will open soon.

On the West Coast cat cafés exist in Portland, Oregon, San José, California, San Francisco and Los Angeles. The idea was born in Taiwan in 1998, and spread to Japan, where it's estimated there are now nearly 150 cat cafés, and Europe (e.g., Vienna).

Posted by Nina Munteanu at 2:36 PM No comments: