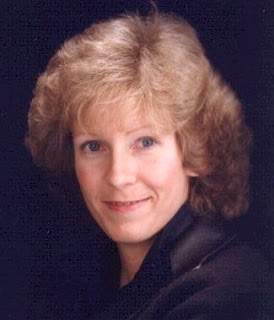 It's Friday and time for my Friday Feature. But you better not blink because my Friday Feature is a blur of electric motion. She's a flow of iridescent color that commands attention, yet evades the indolent glance. She’s simply too fast.


Karen’s not only fast; she’s everywhere: widely traveled, particularly in Europe and Asia, Karen Mason is a marketing entrepreneur, publisher and broadcaster, as well as an accomplished cryptographer with knowledge of the Kabbalah who rides a motorcycle (because she can) and plays several musical instruments (not at the same time, but I wouldn’t discount that either). Karen knows more languages than I can count and doesn’t seem to require any sleep. That’s a good thing because amid her many “day” job responsibilities, she posts to at least three excellent blogs, actively runs a broadcasting and publishing firm, Starfire World Syndicate, and is one of the founding directors of Worldwide Classroom, an educational site devoted to altruism. Karen Mason is, simply put, remarkable.

One of her blogs, Dog-e-Tail, is devoted to dogs welfare and health in which she dispenses excellent advice on their upkeep and general care along with sharing some touching stories, particularly of misfortunes that usually turn out okay. Her other blog, which publishes short stories and novel excerpts is called Nameless Grace, and is devoted to, in her words, “that inexp

licable beauty that we have come to know as Nameless Grace…” This blog showcases short stories of talented emerging and established writers. She also created and impeccably runs a blog devoted to my own book, “Darwin’s Paradox”, for which I am truly grateful.

After chasing her blurry image and exchanging the odd virtual drinks on Facebook, I finally got Karen to stand still long enough to invite her up to my ship to interro—er—interview her. Being the world traveler she is, of course she agreed. I was immediately impressed with her composure and ability to handle the travel beam. Like Jean-Luc Picard, Lynn Margulis, Jennifer Rahn and Rob Sawyer before her, Karen rode the stupid crystal beam with the ease of a veteran starship traveler while my queasy stomach shifted in severe objection. I still had a lot to learn about humans, I decided petulantly…Maybe it was me. I seemed to be the only one disoriented by my own travel beam! How embarrassing! Somehow, I couldn't quite shake the strange feeling that she was really a being of light who could have gotten herself up to my ship on her own wattage, but traveled the beam just to keep me company...

~~~~
Once aboard my ship, I show her the aft lounge. Karen peers out at the breathtaking view of planet Earth and points out all the places she’s travelled in the world.

SF Girl: “Is there anywhere on the planet you haven’t been to?” I say in awe of her international accomplishments. She’s been to more places on Earth than I’ve been in the Universe!


Karen: Furling her brow slightly, she reflects briefly then gives me a slanted smile. “Egypt. I haven’t been there. And Venice.”


SF Girl: My mouth gapes open. I’m totally surprised! Given her interest and skills in cryptography and interpreting hieroglyphics, I’d have thought she spent years in Egypt! “Really?” I utter, raising a brow. Always the trouble-maker, I dig, “Is that because they wouldn’t let you in?” My heart slams as my imagination soars with ridiculous possibilities. I critically appraise this elegantly dressed woman with coifed hair and tasteful makeup. Karen sips a Bailey’s on ice that my newly acquired robot, Harry, brought to her. She doesn’t remotely resemble an insane terrorist on some crazy mission. Of course, they never do, except on the Reality Network. Then I have a sudden thought: perhaps she’s an international spy! Or worse: a dreaded tax collector! I find myself trembling with fear. What if she calls my bluff? And imposes an audit? Impounds my ship?


Karen: Her eyes twinkle under the lounge lights and I brace for her response. I think she just read my mind... “I just never made it there yet," she says calmly and offers me a slanted smile. "Perhaps next year."


SF Girl: Diffused, I decide she’s not a tax collector after all and sigh. She's too nice. Mind buzzing with spent adrenalin, I ruthlessly pursue: “But why wouldn’t you have gone there already? I'd have thought your university studies would have taken you there…Karen?...Karen?...” There’s no answer…Then I notice that she’s gone into the hallway to talk with Harry in binary code…alas…I can’t understand a bit of what they’re saying… Except that Harry is glowing...
Posted by Nina Munteanu at 12:15 AM

Wow, Nina! Yet another close encounter. So interesting.

I'm quite sure Karen is a force of nature, plain and simple, because she is incredible! Thanks for tying her down long enough so I could learn more about her, Nina--great feature!

Karen indeed sounds a remarkable woman, Nina. Well done on tracking her down.

Glad to have been of service! :)

Nina this is an awesome post. Karen has been a dear friend to me ever since I met her here at MBL. I have seen all these qualities and many more. She is the truest friend anyone could have.

I quite agree, Deborah. We're lucky to know her. :)

{still shimmering from the teleporter beam}

I have longed to see the panorama of our dear Earth from the comforts of your famous aft lounge. What a spectacular view!

I'm putting together a crew for my next jaunt to the Alpha Centauri System. An invitation to appear before the Council of Rigil Kentaurus. Anyone care to sign on?

Oh, your little robot, by the way, was making a pass...

Why that little rascal! I'll have to check his settings again. He also tells bad jokes (HA! You thought MINE were bad! :)