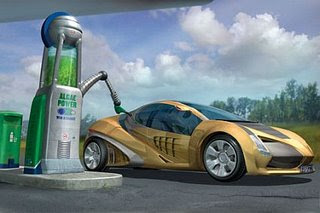 “Remember the BP ads of a couple of years back?” says Dan Sweeny of Juice: Alternate Fuels World. “Something about yellow being the new green, yellow being representative of corn—or maize as the Brits call it. Corn, of course, is the principal feedstock for fuel ethanol production in the U.S, and ethanol, as we all know, has emerged as the consensus answer for overcoming our fossil fuel dependency and ending our reliance on foreign oil. In 2002 it was the Hydrogen Economy, but then in 2006 it was ethanol. And maybe it's still ethanol only now algae derived biodiesel seems poised to displace it as the alternative fuel of the moment.”

In other words, green is soon to become the new yellow. Global Green Solutions who operates a plantation in El Paso, Texas in partnership with Valcent Products, an intellectual property company active in several different fields have a joint venture known as Vertigro.

The Vertegro system is a series of closely spaced vertical bio-reactors made of thin film membranes that allow high levels of light penetration. These new bio-reactors are tailored to grow a species of algae that yields a large volume of high grade vegetable oil, wh 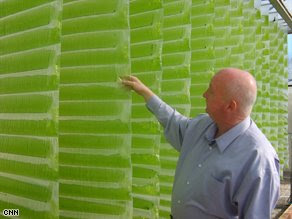 ich is very suitable for blending with diesel to create a bio-diesel fuel. According to the Energy Blog, “The membrane is configured for an optimum flow for the growth of algae. This dynamic system produces much higher algae growth rates than conventional static systems. It uses certain algae that consume up to 90% of their weight with C02 using sunlight as the energy source to drive photosynthesis. Approximately 50% of the dry weight of the algae is an oil suitable for bio-fuel blending with diesel and for other uses. When fully operational, the system yields a constant supply of algae which is harvested, dried and processed to remove the oil, leaving a residue of some 50% by weight, which can also be sold for a variety of commercial products. The system will be a continuous closed loop, which allows for a greater retention of water in the system, and eliminates cross contamination by other algae species.”


They go on to say, “Data received from Valcent's continuously operating test bed facility demonstrates that yields up to 4,000 barrels oil per acre, per year, at an estimated cost of $20 per barrel are achievable on a commercial scale. As a comparison, typically corn will yield up to one-half a barrel of oil per acre per year at considerably higher cost; palm oil, with highest yield of conventional sources, delivers approximately fifteen barrels of oil per acre per year. After a demonstration pilot plant is in operation, several production units that may total 1,000 acres may be built which would have the potential of producing approximately 4,000,000 barrels of oil per year, with significant carbon dioxide green credits and other commercial products. At that rate of production, Vertigro will sequester approximately 2,700,000 tons C02 per year which will be sold as a green credit within the emerging green credit system within the USA and within the Kyoto Protocols.”

“Interest in algae as a feedstock for biodiesel and various synfuels appears to be extremely high,” says Dan Sweeny. “And investment has been pouring into this area.” Sweeny provides contact information for those interested in investment here.

It sounds very good, but I can't see alternative fuels being taken seriously until oil slows down

Sounds like a better idea than ethanol, at least.

Strange that the article compared the conversion of Corn into oil when (for the most part) corn is used to create ethanol.

Development of energy is more complex than most of the promotional articles expose.
Example: the drive to ethanol has diverted land that was used to produce food into production of fuel. To grow and convert corn into ethanol takes a lot of energy and water.
On the surface, I would agree with janet, that biodiesel from algae sounds better than using corn. The downside is that most vehicles on the road today are better suited to ethanol/hydrogen and petrol.

The proponents of these ideas seldomly factor in all the costs/impacts that pop-up once you scale up the production from 1 acre to 1000's of acres.

In the long run - 1st world humans must reduce their overall impact - Eat less, travel less and use energy as efficiently as possible.

I also expect that a 1000 acre aglae "farms" will get the same complaints that farmers that set up large greenhouses get - loss of animal habitat.

-- Just visting this planet,
The Worker (cohabitor with Baby Brie)

Yup, there's always a downside to any alternative. You make some excellent points, Anonymous Worker. Algae just has so many things going for it: rapid growth, small area coverage compared with traditional crops like corn, and less maintenance and equipment costs... There is the water factor.... but they even have that covered. I'm on side! Sign me up! .... oh, I need some money first.... :)

Where do you live, Raheel? This technology is definitely affordable and efficient.