What’s BMI and Why Should I Care?

BMI stands for Brain Machine Interface and will likely play a fundamental role in how we manage our biological and mental selves, and—in the long run—how we view ourselves as a species. I’m talking about controlling robots—and other machine parts outside and inside ourselves—with the mind.


Do you remember a few decades ago (the early 1980s) how Apostolos P. Georgopoulos of Johns Hopkins University recorded the electrical activity of single motor cortical neuro 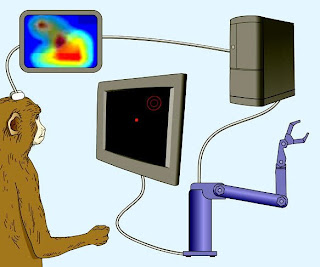 ns in macaque monkeys?
This was followed shortly after by some awesome experiments by Miguel Nicolelis and John Chapin at Hahnemann in the mid-1990s who taught rats in a cage to control a lever with their minds. Nicolelis and Chapin trained rats to press a lever with its forelimb to get water. They then fitted the rat’s head with a “brain-machine interface” (consisting of a little cap with connections wired to a computer). After getting used to pressing the bar for water, the experimenters disconnected the bar from the lever and the rats actually learned over time that they had to “think through” the motion of pressing a bar. Nicolelis and Chapin then applied a more sophisticated version of this experiment to monkeys in 2000, like Belle the tiny owl monkey, who learned to use her thoughts to direct the actions of a robot.


Now, here’s the cool part: Nicolelis and Chapin found that as the animal perfected its task, the properties of their neurons changed—over several days or even within a daily two-hour recording session. Gradual changes of neuronal electrical activity helps give the brain its plasticity, say Nicolelis and Chapin. “The number of action potentials a neuron generates before a given movement changes as the animal undergoes more experiences.” They, therefore, added a simple routine that let their model reassess the contribution of each neuron. Their BMIs can maintain viable recordings from hundreds to thousands of single neurons for months to years and utilize models that can learn, and therefore can handle evolving neurons, neuronal death and even degradation in electrode-recording capabilities. These researchers later discovered that the monkeys learned to use a BMI to control a robot arm without actually moving their own arms and, in fact, “incorporated the dynamic properties of the robot arm as if it were part of their own bodies.”

In 2004 Nicolelis and Chapin reported the first interaoperative demonstration of a BMI in human subjects.


Nicolelis and Chapin predict that BMIs might someday help patients suffering from seizures or a person whose limbs have been paralyzed by a spinal injury to move their “dead” limbs or other prosthetic with their minds, as if it was part of their biological system. For instance, the computer would convert the signals from a person’s mind through a neural chip in their brain into motor commands and dispatch them wirelessly to a different chip implanted in the person’s arm or prosthetic or wheelchair, etc.


Indeed, this technology promises to blur the biological from technological as our minds learn to interface both realms. Human and machine will indeed blur in the future. The future is here.

Brave new world! No wonder SF writers are having trouble keeping ahead of the curve. I have a copy of Darwin's Paradox on the way and am looking forward to it. I'm a lifelong SF fan, but admit, to my shame, that I had never heard of you before. Blame a crappy public library.

Just want to say how much I enjoy your blog. Discovered it through Entrecard, and am slowly working my way through the archives. What a treasure house of ideas! I very much appreciate your blend of expertise, insight, incisiveness and humor. To belabor the comparatively trivial, your review of Casino Royale was spot on.

Coolio, Catana! Thank you so much for your kind words (yay, Entrecard!)and for getting a copy of Darwin's Paradox. Hope you like it; if you do, you might want to suggest your local library get it in. It's prequel is also coming out late this year with Dragon Moon Press (nina beams incandescent... :D )

I take it you enjoyed Casino Royale too! :) You've just reminded me that I'm behind in posting reviews... ah... so many things, so little time...

Very informative, Nina. When I saw the title, I thought you were talking about diets, which is odd, as BMI also stands for Body Mass Index

HAR! Yes, it does!LOL! It is also the acronym for Broadcast Music, Inc. and the name of a UK airline and a Canadian importer... Ah well... :)

The irony is that Body Mass Index may well be something that is used in Brain Mind Interface technology to help monitor and control people's weight.

This is always a interesting concept for fiction. I've got a variation, not machine to machine, but a way to "download" information directly from one brain to another by physical contact in one of my projects. Read a little about neurology to support this, and, wow, fascinating stuff!

Very cool, Stephanie. Mind to mind... and why stop at "contact"... a recent post of mine reviews some awesome ponderings by Rupert Sheldrake and others on morphic resonance and "extended minds" (http://sfgirl-thealiennextdoor.blogspot.com/2009/01/nina-signs-book-in-victoria-british.html). According to Sheldrake, morphic resonance is transmitted through “morphogenetic fields”, which are analogous to electromagnetic fields in that they transmit information, but differ in that they do so without using energy and are therefore not diminished by transmission through time or space. VERY COOL stuff!... :)

What is science without imagination?...

Thrilling stuff, Nina. And no doubt, there are still more applications we cannot yet imagine...

You would have loved the workshop I was at on Friday morning! All about neruotherapy as practiced by a Dr. Paul Swingle right here in Vancouver. He uses biofeeback for the brain to tread attention deficit and hyperactivity disorders, epilepsy, anxiety, migraine, trauma, and depression. It's all based on the idea that we can control our brian activity and that through training, the brain can learn to modify its own electrical patterns for more efficient processing or to overcome various states of dysfunction.

Yup, Heather... you've hit it on the nail... it's all about imagination...that's the only thing that stops us, really...

Baby Brie, that workshop sounds awesome! Wish I'd been there with you. Again... it seems that what we envision as possible--or impossible-- is often what really gets in the way...

Very cool. I've read up a little on this, and it is amazing. "We can rebuild him... we have the technology to build the world's first..." ;]

Agree with the other reader, at first I thought this was about BMI, the music conglomerate, and I was wondering how that tied in with your cutting edge topics. :D

I saw the Chambord not long ago, and almost considered getting some. But the same price almost gets both the vodka and the creme de cacao, so I went with that.

HAR! Good one, Blackburn... But you really do have to try the Chambord some day... especially if you like raspberry. It is TO DIE FOR! Simply exquisite.

Very nice article - thanks for the information. I have a question about the first image in the article: can you tell me where that came from, if it copywritten or for purchase, or just free internet material for anyone to use? I am a graduate student and would like to use the image for an assignment, but want to make sure I give due credit to the originator of the image, if necessary. Thanks for your help!

Hi, Stephanie... I'm sorry that I can't help you. I downloaded the picture some time ago on the internet and can't recall where it came from.