Creative destruction … sounds like a paradox, doesn’t it? Nature—and God— is full of contradiction and paradox. There is so much that we do not understand (at least on the surface)… and apparent contradiction proves that to me. As my character, Serge, (in my upcoming book, Splintered Universe) says, “… somewhere between the infinities of [worlds] you would experience paradox: black holes, quasars; intuition, déjà vu, clairvoyance… order in chaos…darkness at the heart of all beauty… beauty in the heart of all darkness…a mathematician with faith …the strength of surrender…dying to live…loving your enemy…” Paradox lies undeniably at the heart of the clash of two realms.

I understand something of paradox. As an ecologist, I deal with it all the time.

Destruction in creation and creation in destruction is inexorably ingrained in the life-cycles of everything on this planet, indeed in this universe. A forest fire can destroy life but in so doing creates a more vibrant, healthier forest. In my earlier post, the Speed of Life—Part Two: End of the World? I discuss the image of the Ouroboros (the mythical snake swallowing its own tail to sustain itself) in the Greek prophecy of the Suntelia Aion, the calamitous “End of an Age”. If that isn’t a paradox, I don’t know what is.

In my book, Darwin’s Paradox, Julie applies her father’s ecological precept to describe her observations on the rise and fall of a civilization, an ecosystem and an entire world. The precept was based on C.S. Holling’s 1987 ecological model of creative destruction:

Fire was a constant hazard in the heath. Yet, fire served the heath by discouraging invasive shrubs and halting succession. The grazing deer populations completed the job of keeping the heath from reverting to woodland. So, fire had its place as creative destroyer in the natural cycle of ecosystem behavior. Stable chaos, according to her father. It was a harsh and rude environment, Julie concluded. Like thieves in the night, bell heather, gorse and purple loosestrife snatched everything for themselves, leaving nothing for the others. Like many things in nature, the heath plants, though beautiful and fragrant, were ruthlessly greedy. . .

We humans are greedy. Look at our economic models of “sustainable development” (yet another paradox). Creative destruction was first introduced as a term in 1942 by the economist, Joseph Schumpeter. He used it to describe the process of industrial transformation that accompanies radical innovation. According to Schumpeter’s view of capitalism, innovative entry by entrepreneurs sustained long-term economic growth, even as it destroyed the value of established companies that enjoyed some degree of monopoly power. An example is Xerox, who has seen its profits fall and its dominance vanish as rivals launched improved designs or cut manufacturing costs, drawing customers away.

In his classic paper, entitled: “Simplifying the complex: the paradigms of ecological 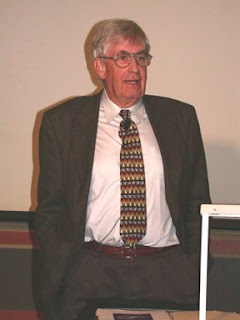 function and structure” (1987) C.S. Holling applied Schumpeter’s term to ecology. Holling’s model of ecosystem behaviour recognized ecosystems as non-linear, self-organizing and continually adapting through cycles of change from expansion and prosperity to creative destruction and reorganization.

Holling presented several paradigms that ecologists use to describe the causes and behaviour (and management) of ecosystems, including an equilibrium-centred view (based on the constancy of behaviour over time), which Simon Forge described as “driving using the rear-view mirror”—trying to judge the road ahead by what went on behind. Holling advocated a “nature evolving” view, which describes ecosystems as undergoing sharp, discontinuous changes that are internally organized and balanced (I like his mobius loop to describe the closed oroborus-like cycle of creation and destruction in nature). Holling described four phases of natural ecosystem succession within his “nature evolving” paradigm. It starts out with the exploitation phase, in which new opportunities are realized through rapid colonization and competit 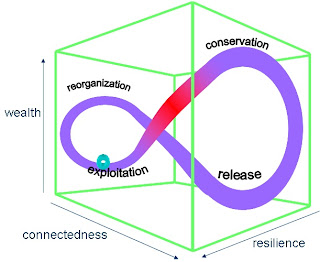 ion. Natural forces of conservation (e.g., nurturing, consolidation) lead to vulnerable systems (e.g., old growth forests), as stabilizing factors lose strength and the system evolves from having few interrelationships to having many. The result is often an abrupt change that both destroys systems and creates opportunity (creative destruction) through fire, storms, pests, senescence. Mobilization of bound, stored “capital” (e.g., carbon, nutrients and energy) through physicochemical and biological processes like decomposition and mineralization completes the dynamic cycle of functional ecosystems.

What this means for the ecosystem manager is that efforts to detect responses to changes, including human interventions like restoration activities, are confounded. Traditional (equilibrium-centred) ecosystem management may be misdirected, resulting in pathological “surprises” of ecosystem response and a spiralling vigilance and cost in control measures. Examples of traditional equilibrium-centred management of forests, fish and other organisms of terrestrial and aquatic environments with devastating consequences include:


In each of these examples, the policy succeeded in its immediate objective. But in each case the system evolved into something with different properties and each “solution” led to a larger problem. In short, the biophysical environment had evolved into one that was more fragile, more dependent on vigilance and error-free management. Something Holling called “Nature Engineered.”
In his classic 1987 paper, Holling suggests that ecosystems be viewed—and managed—as “Resilient Nature”, where the experience of instability maintains the structure and general patterns of ecosystem behaviour; in other words, that Nature ‘learns’ and accommodates with time. In the final analysis, it is a matter of scale.
So, how does this relate to current environmental issues we are facing? Global warming, for instance?.. I’ll give you my two dollars worth in my next post...

Two dollars worth? Whatever happened to two cents worth? Has inflation really gone this far today? Ouch.

Whatever the price of admission, I will pay, gladly. You are a brilliant writer and thinker.

This is interesting stuff. I will have to bookmark this for reference!

It's true Nina. No matter that is destroyed, there will always be something created in it's place.

Yeah, two cents doesn't get you more than two sentences and I just can't stop at two sentences! Thanks for the kind words, Dan.

Jean-Luc, you are so right... the question is what takes its place? And that is the subject of my next post! :)

I love those pictures, and very interesting reading as well!

Thanks, Brady! From molten fire to "liquid" fire...Pictures convey so much. I am always attentive to them, as they often set the tone of what is written. Like music and lyrics, the visual together with the written art form create an antiphonal message.

And let's take these lessons from ecosystems in the world around us to the ecosystem of our own mind.

We try to maintain everything in our heart and mind, as a status quo, loving our habits too much.

Looking backward to see what we should do, and where we should go.

I was recently looking at a book from Marsha Sinetar, called the Mentor's spirit. She says (paraphrasing) that obstacles present themselves to free us from supposed limits.

Creative destruction, significant (often unpleasant) change within us is often the only way to free ourselves from old patterns that imprison us, and prevent us from being the person that we can be.

Creation into destruction into transformation back to creation. The ancients had that part worked out. Love your analysis.

Very interesting. Reminds me of a news item about how fresh water run off into the ocean is causing "fire weed", a toxic primordial bacteria, to bloom in the ocean.

Joel, I love your analysis; obstacles in our lives are indeed opportunities, aren't they?... I also like how you made the fractal association with "ecosystems" of our minds... Neat! Thanks for your insight.

Sandra... yes, the ancients had everything right... while we seem to require proof before we accept a "truth" the ancient wise men simply "knew"... Buddhism, Sufism...these and others take the minds of students to the edge of chaos then back to enlightenment.

Thanks, Misque, for the note on "fire weed". Yes, Fire Weed, otherwise known as Lyngbya majuscula (a blue-green alga)is "blooming" as a result of nutrient-rich runoff in Australia. See here for the story: http://www.latimes.com/news/local/oceans/la-me-ocean30jul30,0,6670018,full.story... and my Thursday post for my take on it... As an aquatic ecologist, I've dealt with algal blooms (mostly in freshwater environments) and these can be very nasty, indeed!

very interesting take on Schumpeter's work - I find the juxtaposition between he thoughts and ecology fascinating.

Yes, I too find this fascinating. Ecology and economy are interelated... they use the same language and concepts. Economists would do well to study the science of ecology and Nature's examples to gain a further understanding of how a society functions successfully.