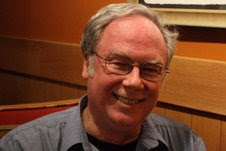 When I met up with UBC grad student, Krista Fogel, at Starbucks a couple of months ago, one of her other “subjects” joined us. David Walker is a biochemist who is also a sculptor. What I found marvelous was how we just gravitated toward one another in an effusion of dialogue that was exhilarating and thoughtful. So thoughtful was it, in fact that it sparked that climate change nightmare I had the next day. We talked about “the speed of life” and the suntelia aeon, the role of art in science, of holistic thought, autopoiesis and fractals. We were of like-minds; we were scientists who were artists or artists who were scientists. It didn’t matter. The two were inseparable.

I asked David if he’d like to see the view of Earth from Vinnie in orbit and he didn’t blink an eye before giving me an unequivocal yes.

Despite the rather rough ride for him, David braved the trip up to Vinnie and, after giving him a tour of the sentient ship, we settled in the aft lounge and Harry, my pesky bot, handed us two coffees. Mind burning with questions I set out straight away with my first:

David: His eyes crinkle with a gentle smile and he replies in a soft spoken voice, “The short answer to both questions is an emphatic yes. As a morphologist I have struggled with defining the relationship between structure and function in marine algae and mammals. The artistic “eye” and involvement with visual arts has helped me in the recognition of the significance of morphological observations and in generating morphological hypotheses if you will. In other words formulating a visual hypothesis as to what the cells in question might look like if what I had conceptually hypothesized was in any way near correct. I have done all of the illustrations that I have used in my papers myself. This has been invaluable first in that I have to understand what I am illustrating clearly and then I can judge the accuracy of my illustration.”

SF Girl: “How would you describe the role of science in society?”

David: “From the basic science perspective, science is one of many ways to experience what it means to be. It is a way to “see” ourselves and the world we live in a way that is supposed to be an objective manner. Science in a way is supposed to tell us what it is like to exist and how things do exist in our world in a way that is supposedly objective. This is often construded to mean through various kinds of measurements often numerical. These stories or obse 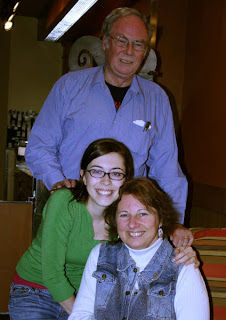 rvations are believed to be objective. In a more practical sense or applied it is a tool for problem solving such as in agriculture and biomedical research. In short it is a tool we use to improve our manipulation of and understanding of us and our world.”

SF Girl: “How would you describe the role of art in society?”

SF Girl: “Art, or doing art, is another way of experiencing the world and sharing that with others. It is on the surface perhaps more subjective as it can be based on how a specific individual esperiences what it means to be. However, I believe the closer the subjective experience is to something that all humans have in common the more its potential is to become objective or common to all. A simplistic example might be my painting a portrait of my mother. It is on the surface very subjective in that she is only my mother. However, if in my painting I succeed in capturing something that is fundamental to the mother child relationship then it can become meaningful to others who have mothers and can speak to others about that relationship and in this sense begin at least to represent a more objective or ubiquitous aspect of maternity. In a sense when art attains the level of being more objective it can actually “speak the truth” about what it means to be just as much as science can. There are things for instance that Shakespeare has said about humanity and human behaviour that I expect most would agree is accurate. I don’t know if that qualifies as true.”

SF Girl: “How do you reconcile these two?”

David: His brows furrow in thought. “I do not know that the arts and sciences need to be reconciled actually. I would speculate that Leonardo de Vinci didn’t worry about the fact he was painting and designing flying machines or exploring the human anatomy. Perhaps the need to reconcile them is born of our suffering from the reductionist paradigm and our current compulsion to compartmentalize knowledge and activities so that many know much about very little.”

SF Girl: “Can you speak to the similarity or difference in finding ‘truth’ through science vs. art?”

David: “I believe that science like art is one way in which we can see what it means to be but then the understanding we gain is often used naturally by humans to manipulate our environment. For instance, the use of electric lighting drives the effects of diurnal rhythms into the background. Heaters and air conditioners eliminate the thermal evidence of seasonal cycles. Traveling in automobiles and trains and planes turns the outside world to images in a window. Urban living separates us even from what it takes to provide the food we eat. All that the cosmetic industry does to hide age fosters the denial of aging and death so that when the end does come it is a rude shock and not a natural punctuation at the end of a life but some kind of tragedy.”

SF Girl: “What advice do you have regarding the pursuit of art for young scientists just starting their career (e.g., your students)?”

David: “In hind sight I would encourage them to hang on to and if nothing else continue to “practice” their preferred form of artistic expression throughout their careers. They of course must be the judges as to how much is right for them. I believe that art provides a fine balance to all that is science and in addition can enrich the life and even the science that the scientist does. Balance in a busy career will always be an issue. I know that the halls of academia are littered with the wreckage of destroyed marriages and probably neglected children left acting out.”

SF Girl: “We are showcasing two pieces of your art. Can you talk a little bit about each of them?” 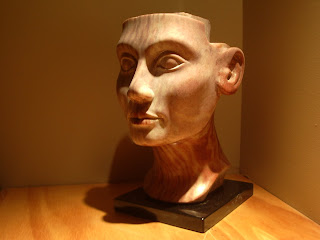 David: Now beaming with excitement, “the bust of Nefertiti is carved in alabaster. She is about 9" high. The inspiration was a bust of Nefertiti that is in the Egypt Museum in Berlin that I have seen there and in photographs. Sculpting a portrait is a very intimate process in which you become extremely familiar with another's face. In a sense it was hoped that in doing this portrait I might come even a tiny bit closer to comprehending who Nefertiti might have been. It certainly left me all the more impressed with her but wondering all the more about such a woman who could be so famous for so many thousands of years. The other work is my Golgi Apparatus carved from Yule marble from Colorado. The golgi apparatus is found in virtually every mammalian cell. It is sort of a round house of protein sulfation and glycosylation or the addition of sugars to the protein backbone of the molecule.It is made of a stack of membranous cisternae (pillow cases with no openni 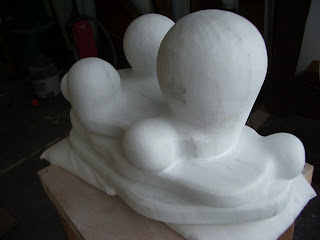 ngs). Synthetic product and membranes flow through the golgi apparatus.”

SF Girl: “Thanks, David! So, tell us a little bit about where has David Walker come from?”

David: “I have done two and three dimensional arts all my life. I began drawing for my father at 3yrs and playing with clay at 4yrs of age. My brothers and I played with clay all the time I was growing up. I played at drawing and painting all along as well. Early in my teens I became interested in biology but from a structure/function perspective. I followed this path as a profession through two bachelors degrees and a masters degree from the University of California in Zoology, Botany and Botany/Cell Biology. We came to Canada so that I could do a PhD in Marine Botany/Cell Biology. At the end of the PhD I moved to Pulmonary Research and then into the Department of Pathology and Laboratory Medicine at University of British Columbia where I am an Associate Professor. Although becoming a biologist may seem a diversion from art it actually has been a parallel realm in which I have explored the architecture of life and living organisms down to the supra-molecular level. For more than 30 years I have been exploring the cellular and subcellular realms of structure and trying to relate it to function. It has been a profound privilege and more and more it invades my art. (see my golgi apparatus, the most beautiful organelle in the cell). All along the way I have done drawing, water colour and oil painting. I took six years of instruction in Chinese brush painting here in Vancouver BC. Almost 10 years ago I took a one week stone carving course at the Vancouver Academy of Art and fell in love with it. I studied with Alberto Replanski all of this time until his untimely death the end of January 2008. Over the last four years I have gone to two marble carving workshops in Marble/marble Colorado and brought marble home with me. One piece is completed and two are under way. Stone carving is what I do mostly and it is what I love the most. Inspiration for subjects to sculpt range from figurative to biological topics all being related to my search for beauty in this word fraught with so much ugliness. Both visual arts and biological sciences explore what it means to be and to be alive. Both disciplines assist us in learning to see what we look at, something few really do. Both endeavors have enriched my life and also each other. I am profoundly grateful.”

Wow, his art is wonderful, and the interview was lovely. Reading over your shoulder from Taiwan....

Thanks, Dan. And thanks too for sharing your news on Cassini (my previous post)

What exceptional art, Nina. You found a good interviewee there.

Thanks, Jean-Luc! I think so too. I love how, in the golgi apparatus, David incorporated his fascination with biology with his love of art.